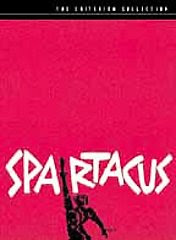 I’m ashamed to say it, but I’ve been spoiled by Star Wars. Ever since that epic trilogy, I’ve watched battles between sword-carrying individuals and expected precision timing, loud clanking, and physical feats befitting only the most nimble of Olympic athletes. So it came as a bit of a surprise to me how realistic the combat scenes in Stanley Kubrick’s Spartacus looked. Some of these battles, I must admit, were over before they started – two soldiers run at each other, one is slightly faster to the draw than the other, and soon the slower one is lying on the sand dying. Other battles are held between two more equally-skilled adversaries, and therefore their potential moments of glory last longer – but not much longer. And, it must be said, even these men occasionally misstep, the result of which - more often than not - is death. Because of this, the soldiers in Spartacus are more human than the ones we are used to seeing in movies, and that makes their stories all the more involving.

Spartacus (Kirk Douglas) is a man of conscience who yearns for a time when he and others like him, people born or forced into a life a servitude, will have the freedom they so cherish. As the film opens, we see an example of his humanity – he tries to help a worker who collapses of exhaustion. For his benevolence, Spartacus is beaten, tied to a rock, and left out in the sun to die. He is saved by Lentulus Batiatus (Peter Ustinov), an odd man who comes to the deserts of Libya to find slaves that he can train to be gladiators. Impressed by Spartacus’ strength, reflexes, and teeth, Batiatus offers to purchase him. As a result of this, Spartacus is trained in the art of combat, and soon it is clear just how skilled with the sword his is.

There is a woman, of course, another of Batiatus’ slaves named Varinia (Jean Simmons). One night, Batiatus pairs the two of them up. Once in Spartacus’ basement prison, Varinia displays virtually no emotion as Spartacus gently caresses her skin and hair. “I have never been with a woman,” he says, and at that moment, it looks as if he has determined that this will be the night he will be. He is stopped, however, by the voyeuristic nature of his master and his right-hand-man and boldly declares his humanity. “I am not an animal!” Varinia looks right at him and makes the same assertion. Their mutual claims to dignity are all it takes for the two of them to bond.

Later, Varinia will watch as the man she has grown to love is forced to fight to the death, not out of necessity or for glory, but to satisfy the curiosity of two women who want to know what it’s like to fight to do so. To make the spectacle even more pleasing, they request that the gladiators dress “modestly.” Their pleasure at seeing two men go at it is in stark contrast to the horror written all over Varinia’s face as she watches the duel. The duel itself is tense and a bit sloppy, but it contains the first of Spartacus’ many surprises. As Varinia watches the match, little does she know that Marcus Licinius Crassus (Laurence Olivier), one of the men also watching the bout, has decided to purchase her.

In Spartacus, we see Rome as it existed before Julius Caesar ceased absolute power. It is a land in which the military is dangerously extended, a land that is riff with political distrust, as men jockey for the best position at which to attain political power. We also see the sad moral state of Rome at that time. There, two kinds of people existed, those who were slaves and those who weren’t, and given the opportunity to treat those who were slaves in the most despicable way possible, few did the honorable thing. We are introduced to Sempronius Gracchus (Charles Laughton), a member of the Roman Senate who feels that Rome is stretched too much as it is to take on another conflict. More importantly, he just happens to dislike Crassus immensely. However, he is also no friend of emancipation and even gets along quite well with Batiatus.

As Spartacus and his army move toward what they hope will be their much sought-after freedom, their numbers increase, as does the number of people sent to stop them. The quest send Spartacus’ band of men, woman, children, and gladiators over tough, unforgiving terrain. There are casualties along the way. In one scene, Kubrick focuses on a man and a woman burying their infant child, as members of Spartacus’ “army” slowly pass behind them. It’s not the first death, and it won’t be the last, for Crassus has two goals: to stop the rebellion in its tracks and to “kill the legend of Spartacus.”

Spartacus is tense, thrilling, and fascinating from start to finish. Kirk Douglas delivers an astonishing performance as the great, but slightly flawed Spartacus. I say slightly flawed because I couldn’t help wondering why he would reveal his plans to the enemy. Only someone with too much confidence or extremely loose lips would do that. Olivier’s and Laughton’s performances are also worthy of praise. I should also mention that Spartacus has an incredibly poignant final act, and not just for the uplifting “I am Spartacus” scene.

Spartacus goes wrong though when it drags Crassus’ sexual orientation into the film. It is one thing to portray Crassus as a sadistic man hell bent on achieving power. It is another thing to present his sexuality as somehow being indicative of his moral character, which Crassus’ slow, deliberate illumination on his appetite for both “snails” and “oysters” is meant to convey. The scene simply has no place in the film and seems to only exist to explain why Antonius (Tony Curtis) flees Crassus’ home. However, isn’t the opportunity to be liberated enough of a motivation? I would have thought so. I should say that this is a minor part of the film and that audiences in 1960 did not see it. I doubt contemporary audiences need to either.

That said, Spartacus works in every other way. We care for this gentle giant and hope that he and Varinia achieve their must-deserved happiness. We marvel at the political back-story and wonder how it will all end, even though part of us already secretly knows how it must end. Simply put, Spartacus deserves its place in film history. (on DVD by the Criterion Collection and Universal Studios)

Labels: 4 and a half stars, Kirk Douglas, Kubrick, reviews