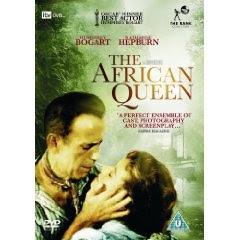 Picture this if you can. A woman is having a grand time in a small boat called the African Queen. She is smiling and seems to be enjoying the presence of the man whom she is accompanying on her journey. The man is a rather cheerful chap and seems to be taking a certain pleasure in the sound of her laughter. The man offers to make her tea, she asks him what he’s drinking, and replies in a nonchalant manner, “Gin.” Suddenly, all is different. The word has had an unnerving power over her, and her smile is instantaneously replaced by a mixture of shock and fear, as if the word gin has sent her mind spinning to some distant avenue of the brain where long-suppressed nightmares are stored. It’s a truly powerful moment. And then in the blink of an eye, the moment is over and never explained.

In other films, a moment such as this one would form the basis for later, much more serious conversations, perhaps about the damage that alcoholism inflicted upon the woman’s family or for that matter about her own struggles with the beast that is alcohol dependency. We’ll never know, for the man does not appear to notice her reaction, and thus whatever tale is behind it remains an enigma. In some movies, such an unexplained detail would be potentially frustrating for the audience; however, in John Huston’s The African Queen, it is an instance of pure genius.

I say this because the conversation that would have to take place in order for us to understand her reaction would require that the two characters engage in a rather serious conversation about the past, and the characters in The African Queen are almost completely focused on the present. Sure, they make small talk about how long they’ve each been in Africa and what part of their respective home countries they’re from, but anything else would probably be a distraction from the task at hand. And that task became perfectly clear when the woman, the sister of a reverend irreversibly wounded by German troops after the onset of World War I, said in a determined and almost hypnotic voice, “Could you make a torpedo?”

The woman is Rose Sayer (Katharine Hepburn), and her words seem at odds with the devoted missionary she appears to be at the beginning of the film. Yet, witness how quickly she casts aside that role and dedicates herself to inflicting a heavy blow on the German war machine. The man is Charlie Allnut (Humphrey Bogart), and it is his skills and seamanship that she must rely upon if they are to carry out her plan of attack. The plan calls for them to somehow make it down the treacherous Ulanga River and then ram the German gunship, the Louisa, with their boat, the African Queen, thereby setting off the torpedo and downing the Louisa. Along the way, one of the most interesting relationships I’ve ever seen in a film develops.

However, the rest of The African Queen is a thing of beauty, consisting of two of the most likeable and fascinating characters I’ve seen in a long time. They bond, learn to truth each other, and ultimately fall in love. In another film, I may have questioned the amount of time it took for them to do so, but with performances like the ones Bogart and Hepburn deliver, as well as the gifted leadership of director John Huston and an impressive story by C.S. Forester and James Agee, there is not a moment in their relationship that rings false. Combine that with a suspenseful plot, several emotionally-charged scenes, and a pair of unforgettable performances, and you have a film that intrigues, thrills, and makes you believe in the awesome power of destiny. This is truly a film not to be missed. (currently unavailable on DVD)

*Humphrey Bogart won Best Actor for his role in The African Queen.
Posted by Azrael Bigler at 8:19 AM

Labels: 4 and a half stars, Humphrey Bogart, John Huston, reviews