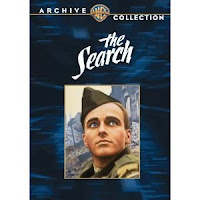 It is probable that Fred Zinnemann’s 1948 film The Search played to audiences that had yet to learn the full extent of the Nazi’s atrocities during the Second World War. Therefore, when audiences at that time watched the film, they may have been overcome by a sudden surge of empathy when they heard the narrator in the opening scene explain the plight of a group of lost, shell-shocked orphans, many of whose parents were sent to concentration camps and did not survive. However, if I had been the director, I would have looked at the faces of the children on the screen and immediately ordered the narration to be cut from the film, for when you have young actors giving you the performances that these actors are, there’s simply no reason to have a narrator explain to us how the children feel. We can see just it when we look at them.

I also have the feeling that present-day audiences will find themselves frustrated and a bit angry as they watch the first few scenes in the film due to the simple fact that they know more than many of the characters in the film do about what these children have gone through. For example, when we see a group of disheveled children packed into a train car, what present day viewer isn’t going to instantly recognize the similarities between how these children are arriving and how they were likely taken away in the first place? And later, when a procession of army and Red Cross trucks arrives to take the children to some sort of day camp, what modern viewer is not going to immediately recognize the grave mistake being made at that very moment? We know right away that the children will perceive those vehicles as a threat to their safety. And if we know this, it’s hard not to wonder why the officials in charge of such an operation wouldn’t also know it. That they don’t is something we just have to accept. Times were simply different then.

The Search is primarily about a young nine-year-old orphan boy from Czechoslovakia who has completely withdrawn. While other children open up to officials at the camp, this one boy will not. He claims to not know what his name is, where he is from, or how old he is. Normally, this would create a sense of intrigue, for audiences would then learn about him as he learns about himself. However, as quickly as this intrigue begins to develop, the narrator fills us in on the details that the boy himself has forgotten. In addition, the narrator later gives us some additional information: Not only is the boy’s mother alive and well, but she is at that very moment desperately looking for him. Their eventual happy reunion is delayed however after a frightening misunderstanding leads to the mistaken perception that the boy has drowned.

With the exception of the unnecessary narration early on in the film, much of what is in the film continues to resonate today. The circumstances that lead to the boy running away, as well as those leading people to think that he is dead, are believable. That these scenes were filmed in the middle of a German city still devastated by war and Allied bombing only adds to their authenticity. From there, the film is about people adjusting and accepting that circumstances have changed. The boy’s mother must find a way to move on, at least temporarily, and the boy must learn to trust again. To do this, the boy’s mother begins to work at the same orphanage that the boy stayed at for a time. As for the boy, he befriends a young American private named Ralph Stevenson (he prefers to be called “Steve”) who takes care of him and eventually helps him to once again feel what it’s like to have a family. It is this character that gives the boy the name that most people in the film refer to him by – Jim. There’s even talk of the private adopting “Jim” and taking him back to the United States.

I have a feeling that I would have liked the film much more had there been more mystery to it. Knowing who the boy was and the whereabouts of his mother removed much of the drama, giving the film too much of a paint-by-numbers feel. I never felt that I didn’t know how the film would end, and pretty much everything I thought would happen did happen. In addition, several of film’s final moments seem unnecessarily cruel, as characters begin acting as if they were Odysseus when he tests his father’s loyalty towards the end of Homer’s epic poem The Odyssey. However, when the film works, it is a marvel to behold. I particularly liked a scene involving another boy pretending to be Jim, and the scenes between Jim and Steve seem genuine, despite a few somewhat campy moments. Would someone really teach a boy who can barely speak English to recognize and say “Abraham Lincoln”? I’m sure there are more important words such as “hungry” or “emergency.”

The power of the film lies in the circumstances surrounding Jim. This is a boy whose left arm has a serial number on it starting with the letter A, a boy who has seen more horror than any person should at any age. And the film does not sugarcoat his experience by implying that all it takes to wipe away the bad memories is love and a good home. On the contrary, the safer the boy feels, the faster his bad memories surface. It’s no wonder that he asks about his mother when he does.

Ivan Jandle is absolutely astonishing as Jim, an accolade that the Academy of Motion Pictures apparently agreed with, for they awarded young Jandle a special Oscar for outstanding juvenile performance. The Search is also notable for marking the acting debut of Montgomery Clift, and it is clear from his performance in the film just why he became the star that he did. He seems completely at ease in front of the camera and rarely, if ever, strikes the wrong cord. Director Fred Zinnemann, who had made about 27 films prior to The Search, would go on to make such acclaimed films as High Noon, From Here to Eternity, A Nun’s Story, and A Man for All Seasons. He would also win Best Director twice. In addition, I would like to mention the strong performance of Jarmila Novatna as Jim’s mother Hannah. While I’m not sure that everything in The Search works as well today as it did in 1948, enough does to make the film a worthwhile and memorable experience. (on DVD from Warner Archives)

Labels: 3 and a half stars, Fred Zinnemann, Montgomery Clift, reviews