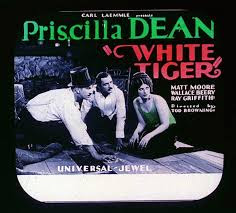 Tod Browning’s White Tiger is a curious thing. It begins by setting up a tale of revenge, then switches to a crime drama, returns subtly to its original theme, and then ends with a strange message of redemption and love. More on that later. Interestingly, it employs as one of its narrative devices a chess-playing automaton, an obvious reference to the Turk, a bogus machine constructed in the late 18th century and touted by a series of owners as a legitimate form of early AI. Believing they were playing a bona fide machine, the Turk attracted players such as Napoleon Bonaparte, who apparently made several attempts at cheating, and Benjamin Franklin. In White Tiger, we find it being used to lure customers to a famous wax museum.

Its operator is a young man named Roy Donovan (Raymond Griffith). When we first meet him, he is a young boy playing with his sister, Sylvia (later played by Priscilla Dean), near his father, Mike Donovan (Alfred Allen), whose premonitions of danger have made him a nervous wreck. Also, in the room with them is Hawkes (Wallace Beery), Hawkes is impatient about something, so after Sylvia goes off to bed peacefully, he convinces Roy to follow suit in such a violent fashion that the boy turns back and, in a rather heavy-handed bit of foreshadowing, voices his hope that Hawkes is alive long enough for Roy to exact revenge.

What follows is a bit confusing, but the result is that the elder Donovan is shot, while Sylvia is shielded by Hawkes, who tells her that both her father and brother are dead and that her silence is essential if the two of them are to avoid joining them. The film then flashes forward twenty years, where we find Sylvia a seasoned thief, having been raised by Hawkes, and Roy a master chess player whose skills have somehow escaped the notice of the general public. There are several problems with this new reality. If Hawkes was responsible for Donovan’s death, why wouldn’t he know that Roy was still alive, and if he is as deceitful and loathsome as he is portrayed, why wouldn’t he have abandoned Sylvia at an orphanage and just went about his thieving ways? He’s hardly someone you’d picture doing those everyday activities that go along with raising a child.

Sylvia and Roy have somehow developed a platonic relationship. (Roy puts us at ease by immediately announcing that she’s like a sister to him.) One day, he happens to see her talking to Hawkes and recognizes him. Normally standard film narratives would call for him to begin planning his revenge, but White Tiger surprises by having Hawkes recruit Roy. See, he sees the wealth to be gained by taking the automaton to America, and since Roy is already a con man, he readily agrees. Perhaps readily is the wrong word. First, he reveals his identity and tells Hawkes of his desire to avenge his father. Hawkes simply shrugs off the allegation, and the two strike up a bargain, a development that likely provoked a collective forehead slap by audience members in 1923.

From here the film becomes immensely interesting, as it begins to focus on the natural aftermath of three people working together without ever having formed a bond based on trust. After all, success and fortune can only pacify division and distrust for a little while, and it is when their uneasy pact collapses that White Tiger is at its finest. Alas, its final few minutes will have you shaking your head and wondering why so many films of this era insist on presenting the rosiest outcome possible, especially when they have put their characters in a situation ripe for tragedy. It is almost as if a studio head looked at the final product and demanded that a way be found for love and family to triumph without presenting the audience with any moral complications. And find one they did. Actually, they found two: Dick Longworth and a litter of cute kittens under a remote cabin – and yes, it is as ridiculous as it sounds.

The film is well-directed. Browning gets excellent performances from Dean and Beery, whom he had worked with earlier that year in Drifting. Dean has that steely look that makes her the perfect choice to play femme fatales and criminals. Here, she is also asked to play tender, and her scenes with Griffith have a pleasant ease to them, the kind you’d normally expect to see in an adult pair of siblings. As Hawkes, Beery does what he has to. He is conniving, driven, and rather ruthless in his financial pursuits. It is not his fault that the script restricts his character, never allowing us to sense any regard for Sylvia or concern that Roy will put all of the pieces together. In a better script, the character would have been conflicted. As is, he’s the kind of character that is easily disposed of, one that not even the woman he raised for sixteen years sheds a tear over. It makes you wonder just what the film could have been with an extra thirty minutes and an ending that demonstrated a backbone. (included as a Special Feature on Kino’s DVD and Blu-ray of Drifitng)

*White Tiger is a silent movie.

Posted by Azrael Bigler at 8:47 PM