Review – Sound of the Mountain 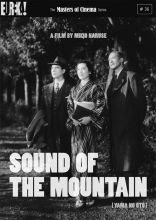 Few women nowadays would leave a man just because he was married.

Contrary to the way we envision the past, there may never have actually been a time of complete adherence to moral codes. However, the sentiments expressed in the above quote make it clear that in the past Japanese women who became involved with a married man were expected to put someone else’s feelings above their own, to sacrifice their own happiness for the preservation of someone else’s marriage, regardless of the emotional pain such a sacrifice inflicted on them personally. It’s a lot to ask of someone, and the end of World War II appears to have made such a sacrifice more difficult to make. In post-war Japan, a country in which marriage and family have for centuries been of the utmost importance, women found themselves greatly outnumbering men. In addition, the war had made widows and orphans of many, and the future was very uncertain.

Mikio Naruse’s masterful 1954 film Sound of the Mountain takes place during this time of great uncertainty and change in Japan. It tells the story of one family dealing with a multitude of issues, ranging from unfulfilled dreams and family disappointments to the looming possibility of divorce. It is a film in which a father will do all he can to keep his son’s marriage intact, and a young woman will do all she can to be the kind of wife and daughter-in-law that her new family will be proud of. Time is simply not cooperating, and as the film opens, infidelity is threatening to tear the family apart.

Towards the beginning of the film, the father, a man named Shingo Ogata (So Yamamura), asks his son, Shuuichi (Ken Uehara), to explain his reasons for having an extramarital affair. Shuuichi rather calmly explains the difference between his wife and his mistress as being similar to the difference between a torrent and a lake. I suppose the implication here is that he married the lake, yet yearns for the torrent. Is it then that he would have preferred to have married the torrent or that he wishes his wife were more like one? He does after all continually refer to his wife as a child, perhaps implying that she is like a child in bed. However, as one of his mistress’s friends rather crudely explains, “He can’t force his young wife to act like a prostitute.” And so Shuuichi continues to have the affair, regardless of who knows about it or the emotional toll it is taking on his kind and adorable wife, Kikuko (Setsuko Hara). Eventually, Shingo takes the usual step of trying to convince his son’s mistress to end the relationship once and for all, hoping that a conclusion to the relationship will reinvigorate his son and Kikuko’s marriage.

Much of what transpires in Sound of the Mountain is shown from Shingo’s perspective, and in truth, he may not be completely impartial. Clearly, he and Kikuko have formed a very deep bond. In fact, Kikuko seems happiest when she is around her father-in-law, and he beams when she is around him. Viewers will have to decide for themselves if there is more to their feelings than just appreciation and respect. Shingo’s wife, however, has another theory. She suspects her husband is trying too hard to make up for her son’s ill-treatment of Kikuko and tells her husband that he is only making it harder for her, that he is killing her with kindness. She may have a point. In addition, as the film progresses, we get the impression that Shingo’s perception of Kikuko may not be entirely complete, and by the end of the film, I couldn’t help feeling just a tinge of empathy for Shuuichi. Whatever he went through during the war is clearly still affecting him.

Sound of the Mountains is one of the most involving movies I have seen in a long time, due in large part to the impressive performances of the cast, in particular Setsuko Hara and So Yamamura. However, credit must also be given to Yoko Mizuki for so effectively adapting Yasunari Kawabata’s novel. Mizuki’s script touches on themes that not many people associate with films from the 1950’s. For example, at one point, Shingo references “swapping parties” and is relieved to know that his son is not attending them. This is also a film that openly discusses issues such as divorce and parental failures. It is not a film that presents the fifties as being innocent, and yet there is a hopefulness to the film that is hard to describe. Perhaps hope is what people must have when the immediately past has been as challenging as it was for Japan in the 1950’s.

Sound of the Mountain is a hard film to find. It was released in Region 2 as part of a three-disc box set in December of 2006, yet it has not been released in Region 1. The film is also available on DVD in Region 3. However, it does not have English subtitles. Given the present reluctance of companies to release classic foreign films on DVD, it’s hard to tell if it will be released in the United States at all. This is a shame, for audiences in the United States deserve a chance to discover the film for themselves. I can only hope that the good people at the Criterion Collection will eventually release the film in Region 1. In truth, I had not seen any of Naruse’s films prior to seeing Sound of the Mountain. However, I consider myself fortunate to have seen it, for the film reminded me that there are other masterpieces out there just waiting to be rediscovered.

*Sound of the Mountain is in Japanese with English subtitles.
Posted by Azrael Bigler at 9:16 AM