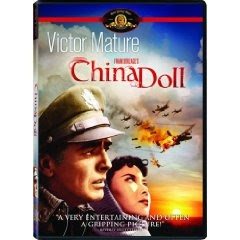 Time has not been kind to China Doll. Just what do we make nowadays of the awkward sight of a desperate man selling his daughter so that his family can get money to survive? It’s nothing new for present-day audiences, and incidents like this certainly have happened throughout history and in some places continue to happen today. The father seems like a nice enough man, and when he says good bye to his daughter, he appears to be fighting back tears. What made this scene uncomfortable for me was the fact that the scene leading up to it had been played for laughs. In that scene the father had desperately tried to explain his situation to Air Force captain Cliff Brandon (Victor Mature). Brandon speaks no Chinese, and the father speaks very little English. So naturally the father does the only thing he can – he used his limited vocabulary to explain his plight. The words that he puts together make a sentence like this: “I have… girl… very pretty.” It’s not hard to see how such a sentence could lead to a misunderstanding. And in fact it does. Brandon lights up like a pinball machine, which is odd seeing as how in the previous scene he had rejected the same kind of offer. Nevertheless, he gives the man a wad full of money, and the man motions to a person concealed in the shadows. A moment later, a young, somewhat disheveled young woman in traditional clothing named Shu-Jen (Li Li Hua) advances. Brandon apparently doesn’t like what he sees and tells the father, “No thanks. You keep her.” Ah, but we have enough sense to know that underneath her restrictive clothing and shy demeanor is a beautiful swan just waiting for the right time to emerge. The woman quietly follows Branson home and after he passes out drunk on his bed, she begins tending to him and cleaning his house. Branson will later learn that what he did when he gave the woman’s father money was purchase three months’ of bonded servitude, a euphemism in the film for housekeeping services, from his daughter.

Since three months is an eternity in a movie, we can guess three things. One, the beginning of their time together will be awkward. Two, they will slowly begin to develop feeling for each other. Three, after almost separating, they will discover that they can’t live without each other and determine to give their love a chance. In the right movie, this formula can be gold. In China Doll, however, it is impossible to fully buy into. This is mainly due to the fact that Brandon and Shu-Jen do not have a way of communicating directly. Throughout the entire movie, whenever an important message has to be conveyed, it is done through a third-person, either Father Cairns, who is in China working with orphaned children, or Ellington, a young orphan who hangs around soldiers and apparently does odd jobs for them such as the laundry. While other films such as Spanglish and Love Actually have one or both characters enroll in language courses and suddenly speak well enough to express their true feelings, this is not true of China Doll. Shu-Jen speaks mostly Chinese throughout the film, and Brandon barely attempts a word of Chinese, which begs the question: How much of a relationship can two people have when one of them can only say things like coffee, sick, and gone?

As a result of this, Brandon and Shu-Jen’s scenes lack the spark necessary to convince the audience that they are deeply in love. To their credit, Victor Mature and Li Li Hua try hard to portray these characters are being deeply connected. However, their ability to do this was likely hampered by Hayes Code era restrictions on the portrayal of interracial couples or by rather peculiar choices on the part of the film’s director or writer. Brandon and Shu-Jen are allowed to hug each other, but they can do little else. While other characters are allowed to openly kiss their girlfriends, Brandon and Shu-Jen, even after they have become man and wife, are not permitted to. Later in the movie, there is a somber moment that screams out for a passionate, emotional response. However, even at such a moment, the cheeks are the only part of Shu-Jen’s face that Brandon can kiss.

China Doll also suffers as a result of the group of men that Brandon is assigned to train and fly missions with. Unlike other war film in which the squad members are depicted as dedicated and professional, the men serving under Brandon, while being generally likeable fellows, are portrayed as slightly unprofessional, somewhat disinterested in improving their skills, and easily distracted. On one mission, they even buy tons of beautiful ornaments and clothing for Shu-Jen, not because they like her but because they think Brandon will like her in them so much that he’ll spend less time with them. And just what do these soldiers do their valuable free time? Most of them spend it in a local bar surrounded by beautiful prostitutes and alcohol or in their barracks playing pool and talking about women. I say most because two of them spend their time courting what appear to be the only two Red Cross nurses on the base. The women don’t seem to mind, though. In the beginning of the film, as Brandon’s crew arrives in China for the first time, we hear one of them remark on the promising nature of this bunch of recruits. How does she know they have promise? She explains it this way - “They’re men, aren’t they?”

China Doll was released in 1958, a year after Marlon Brando romanced Miiko Taka in Joshua Logan’s Sayonara. While Sayonara addressed the discrimination and hardships that soldiers faced when they entered into interracial relationships, China Doll for the most part ignores them, save for one moment when Brandon confesses to Father Cairns that something happened between him and Shu-Jen. I can only speculate as to the reasons why the film’s writer, Kitty Buhler, chose to do this, but given the sometimes unfriendly sentiments toward such relationships in the first half of the 20th century, it seems a bit disingenuous for them to be glossed over the way they are. Perhaps the film is intended to be light-hearted and not entirely realistic. This would certainly explain the decision to have Brandon’s soldiers attend his wedding in place of Shu-Jen parents. It’s certainly more humorous to have an American soldier and an American nurse standing in for Shu-Jen’s parents, but as the film makes clear, it was Shu-Jen’s desire to have a traditional Chinese wedding, and what she gets only masquerades as one.

Some people will no doubt find China Doll to be sweet, humorous, and touching, which I concede that it is at times. Some may even tear up during the film’s final moments – something I did not do. For me though the film is a product of a time when Hollywood presented images that we now recognize as stereotypes largely responsible for creating some rather erroneous concepts of Asian women. It doesn’t matter how “positive” these stereotypes may be. I would be remiss if I didn’t at least acknowledge that China Doll, unlike many of its predecessors such as Dragon Seed and The Good Earth, has a lead Asian character that is played by an Asian actress instead of a Caucasian actress simply made to look Asian. It was certainly a step in the right direction. However, if all that is required of an actress is to stand around, look pretty and be constantly happy so that other characters can remark how beautiful she is or that “the harder she works, the more she smiles,” then it’s a somewhat hollow victory. It would be a while before Asian actresses played characters that were more than just eye candy. I suspect this had something to do with the fact that only one of the 65 films that Li Li Hua has made has been an English-language film. After all, could it have been that rewarding to have to smile every time Brandon says, “Scram”? (on DVD)