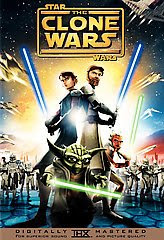 If someone were to watch the first five minutes of Star Wars: The Clone Wars and then mysteriously fall asleep until the film’s closing credits, I’d find it difficult to explain to him what he had missed. It’s not that there aren’t plenty of action scenes or that there isn’t a plot, but rather that by the end of the film, nothing has changed for those occupying the Star Wars universe. Sure, there’s a new character and a rather encrypted lesson that Anakin is supposed to learn through having a padawan of his own, but by the end of the film, neither of these plotlines has gone very far. I imagine the real drama behind each of them was saved for the Star Wars: The Clone Wars TV series currently airing on the Cartoon Network, and if so, then it is not inaccurate to describe the film as basically a pilot episode. And yet this is not my main gripe about Star Wars: The Clone Wars, for there’s nothing wrong with a movie acting as a bridge between the small screen and the silver screen. After all, the X-Files pulled off the feat well enough.

No, the main problem with Star Wars: The Clone Wars is that it never truly gets its audience emotionally involved in the story, and in truth it probably never had an opportunity to. Just what is the point of taking viewers back to a time when Anakin was still trying to be the leader that Obi-Wan and Qui-Gon thought he would be? Everyone knows what Anakin will become. What is the point of devoting so much time to Captain Rex, a devoted officer who will eventually attempt to assassinate Obi-Wan? Sure, these are important characters in this story, but there are also characters whose fates we know going into the film, and for me at least, knowing their future actions affected my ability to emotionally invest in their struggle to save the fragile alliance between the Jedi Knights and the Hutts.

Star Wars: The Clone Wars takes Anakin and Obi-Wan (same characters but different voices) and puts them in the middle of a rather volatile situation. As we learn, someone has kidnapped Jabba the Hutt’s son. At the same time, Anakin, whose demeanor is a lot less dark than it was at the end of Attack of the Clones, is not pleased when he is assigned a padawan, a young woman – possibly a teenager – named Ahsoka Tano. In typical fashion, the two of them clash the same way that two cops paired together in an action film normally do for the first quarter of the film. Ahsoka is reckless, and her actions almost get her and Anakin killed on a few occasions. However, for every boneheaded mistake she makes, she always seems to help out in the end. According to the “buddy film” formula, the two of them, despite the biting, somewhat sarcastic remarks they thrown in the other’s direction, should make a good team in no time. And what better thing to create a partnership than a immensely dangerous mission, one that upon which possibly hindges the fate of the alliance? As for Obi-Wan, he is sent to negotiate with Jabba directly. However, unknown to him, Jabba’s ear (if he indeed has one) is already being bent by Count Dooku (again voiced by the incredible Christopher Lee), who seeks an alliance with the Hutts and exclusive access to their trade routes.

As the film proceeds, we treated to some rather silly dialogue (Ahsoka: “The hard part’s over.” Anakin: “I wish you wouldn’t say that.”) and some surreal moments that are hard to imagine occurring in the live-action world of Episodes I, II, and III. At one point, Obi-Wan surrenders and immediately requests to negotiate terms of surrender. So out comes the head of the enemy army to sit across a stone table from Obi-Wan and listen to him recite a laundry list of demands and considerations regarding the treatment of prisoners. While the scene is intended to show Obi-Wan’s ability to think quickly and outsmart his opponents, the scene came off as silly instead of clever. There’s also a moment that looks oddly similar to one in Star Trek VI: The Undiscovered Country. As Anakin and Ahsoka are packing Jabba’s son into a backpack to make transporting him easier, Anakin says, “I hate Huts.” This comment is recorded and broadcast back to Jabba the Hut, prompting Jabba to further entertain the idea of joining Dooku in his war against the rebels. Replace the word “Huts” with “Klingons,” and you’ve got the message that got Kirk and McCoy convicted of murder.

By the end of the film, we’ve seen two lightsaber duels that resolve nothing, had a political crisis that ended up not having any serious consequences for any of the parties involved, and seen a plot to weaken the Jedi’s fail. Essentially then, we have the exact same situation that we had when the film began with a hail of animated gunfire. While there’s nothing necessarily wrong with this per say, it renders most of the film irrelevant to the larger story. All one would need to know about the film is that Anakin now has a pupil. Other than that, it appears that nothing else of consequence happens in the film. So again I ask, “What’s the point?” (on DVD)