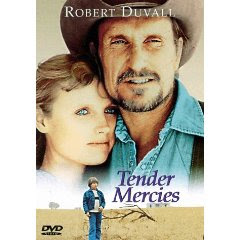 Towards the beginning of Tender Mercies, a customer hands Mac Sledge (brilliantly played by Robert Duvall) some money after Mac has filled up his gas tank. For a moment, Mac is motionless, looking at the money as if he is suddenly wrestling with his conscience. Perhaps he is thinking of fleeing, of taking the money and getting as far away from the desert sands of a small town in Texas as he can. Perhaps he is contemplating what it all means to be in this spot at this very moment, to have a job, a place to stay, and the isolation necessary to start again, if that is indeed what he wants. It is a moment that unfortunately repeats itself, for Mac, as he later explains, has learned to distrust happiness, as if its presence in his life will always be fleeting.

Bruce Beresford’s Tender Mercies allows us to see a pivotal time in the lives of three individuals. First, there’s Mac, a down-on-his-luck musician who has just to look into the mirror to see the reason for his current plight. He is a man whose past includes more than one failed marriage, a daughter he hasn’t seen for eight years, and a promising career in music cut short by his reliance on alcohol and the violent nature it brings out in him. In addition, there Rosa Lee (Tess Harper), a woman fifteen years Mac’s junior who became a widow at eighteen when her husband died in the Vietnam War. She displays an understanding of Mac that is truly remarkable. Finally, there’s Sonny (Allan Hubbard), Rosa’s son, a boy who has had to grow up much faster than nature likely intended. He eyes Mac with curiosity not suspicion, as if Mac can somehow bring closure to something that is haunting him. And as these three characters come together, the past intrudes on all of them, threatening to undo all the progress that has been gained.

I’ve seen films with this set up before, and yet Tender Mercies does not follow any of the standard storylines that Hollywood relies on time and time again. While the first twenty minutes detail the rather sweet, romantic circumstances that lead to Mac and Rosa getting married, the film later reveals this not to have been as idyllic as it first appears. When Mac’s former life begins to intrude on his new one, one might expect it to unravel him. Yet when a band arrives at the gas station and asks to meet him, he accedes to their request and talks to them briefly, even offering them what little advice he has left in him. And when we finally are led to believe that Mac has indeed fallen off the wagon, the carpet is pulled out from under us again in such a way that we are left speechless at how beautiful it was accomplished. There’s even a moment when Mac reveals to Rosa Lee a secret that would probably unnerve most women. However, instead of being angry or hurt, Rosa displays a smile that simultaneously betrays just how intrigued she is at the revelation itself and how happy she is that he is telling her at all. In fact, Mac and Rosa’s relationship may be one of the truest ever put on film.

Of course, Mac’s former life comes calling again. That’s unavoidable, for not many people can simply walk away from a life that gave them fame and fortune and could possibly do so again. Yet Writer Horton Foote wisely embarks Mac on two simultaneous journeys, a quest for career redemption and a quest for forgiveness. Both are fascinating to behold. Moreover, Beresford allows us to see Mac’s journey as it would likely play out in real life, slowly and at times painfully.

I’m tempted to categorize Tender Mercies as a forgotten film. The DVD appears to be out-of-print separately in the United States and without a significant anniversary to release it in celebration of, I don’t see that changing any time soon. I suppose Tender Mercies is not viewed as a must-see film in the same way that a film such as Easy Rider or Manhattan is. The year Tender Mercies was released, it was nominated for five Oscars. It won two of them, one for Best Actor, the other for Best Screenplay Written Directly for the Screen. The other major awards that year went to Terms of Endearment, another film that I suspect is having a hard time being discovered by new audiences. The difference is that the latter film is still in print, and with its status as a Best Picture winner, it will likely always be. This year, Robert Duvall will appear in three more films, films in which I have no doubt he will give stellar performances. In the trailers for them, his name will likely appear on the screen with a caption below it reading “Academy Award Winner.” I hope this caption piques people’s curiosity enough to make them seek out the performance that won him such a distinction. In they do, they’re in for quite a treat. (on DVD in Region 3; on DVD in the U.S. as part of a DVD called Great Performance: Frances/Plenty/Tender Mercies)