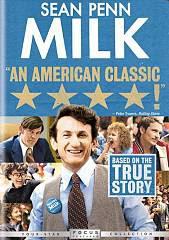 Milk (U.S., 2008) – Gus Van Sant’s inspirational 2008 film Milk is a look at a man coming into his own. As the film begins, we see Harvey Milk (Sean Penn in an Oscar-winning performance) lamenting that he is turning forty and has done nothing with his life, but within seven years, he stands on the steps of San Francisco City Hall as the first openly gay person elected to public office in the United States. It’s quite an accomplishment, especially given how many elections it took for the results to go his way. The film divides its time between two stories. The first involves Milk’s most important personal relationships during this time in his life; the second has to do with his campaign against Proposition 6 in 1978, a campaign that brought him to Orange Country and placed him in front of a much less friendly audience that he faced in San Francisco. Both stories are well told, and together they give viewers a real understanding of the kind of person Harvey Milk was. While most of the film focuses on Milk, we also get a view into the group of men and women that formed his team of political advisors and campaign staff. We also get a good look at San Francisco Mayor George Mascone (Victor Garber) and the kind of support he offered Milk, as well as Dan White (Josh Brolin), Milk’s eventual assassin. The cast is strong, and the film is consistently interesting. The only gripe I have with the film concerns the way it covers five years of Milk’s life in about twenty minutes. We see Milk go from being told that he can’t join a neighborhood organization to being the leader of Castro Street. It’s quite a leap, and viewers just have to accept that it’s happened. However, that’s a minor quibble in an otherwise excellent film. (on DVD)