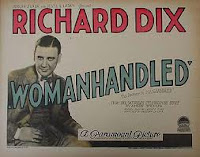 I don’t know about you, but I would think that a smartly dressed man who has the empathy to give both money and food to two down-on-their-luck men in a park and who jumps into a pool to save a child without even a second’s hesitation would be considered a pretty good catch. However, for Bill Dana (Richard Dix), these attributes just aren’t enough. No, to get the woman of his dreams, he must also be from the West. The reason is quite simple: Men from the West, according to Molly Martin (Esther Ralston), have not been “womanhandled.” By womanhandled, Molly means being so pampered and spoiled by the woman in their lives that a man’s true inner nature - his wild side – is utterly destroyed. So when Bill tells her that he has family in the West, Molly is given a glimmer of hope and she encourages him to return to the West and regain the part of his manhood that has been damaged by the overindulgent hands of Eastern women. There’s only one problem: As with most idealized visions of places and people, Molly’s vision of the West no longer exists – at least not in this film. When Bill asks his uncle Lester where all the real cowboys are, he’s told that they’ve all left for Hollywood. In fact, the “cowboys” Lester has working for him presently have never ever been on a horse. This fact leads to many of the film’s funniest moments.

Womanhandled is a rather fun film despite its slightly slow start. It’s one of those films that picks up speed as it goes along, and the second half of the film has some pretty hilarious moments. In that half of the film, Molly informs Bill that she is coming to visit him because she wants to see the West for herself, the West, that is, that doesn’t exist. So what does Bill do? He tries to create it for her.

The film has great performances by its two leads, and Dix and Ralston work very nicely off each other. Ralston seems to be playing Molly as earnestly as she can, and as a result, the character seems very realistic. I’m sure many people have their own versions of Mr. Right. Hers just happens to be based on region instead of education or appearance. Dix is also quite good in the film, and his reactions to each successive disappointment or challenge are spot on. We can see in his face bewilderment, panic, resolve, and the occasional look that says, “Why me?” I also loved the way the film mocks the stereotypes of the West that viewers have seen on the silver screen, from the way movie cowboys talk to the way they dress. The clothes the “cowboys” in the film wear for Molly are obtained from a museum. The supporting cast is equally entertaining, from Edmund Breese as Bill’s uncle Lester to Cora Williams as Molly’s aunt Clara. The film was directed by Gregory La Cava, who would go on to make such films as Stage Door and My Man Godfrey. He certainly had a knack for filming comedy. (on Disc 3 of Image-Entertainment’s Treasures 5: The West 1898 – 1938)