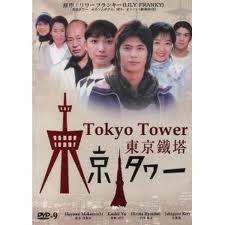 Tokyo Tower has the amazing power to make one feel both sheer exuberance and utter shame – exuberance at the existence of such a wonderful character as “Okan” (Japanese for “mother”) and utter shame at our failure to properly appreciate our own mothers. (To be fair, can we ever appreciate our mothers enough?) If you’re like me, you’ll watch Tokyo Tower and reflect upon your mother’s actions at different stages of your life. At childhood – when she worked hard to make us feel safe and secure; during the teenage years, when she backed up just enough to let us taste independence for the first time, yet never went far enough to make us feel alone; during the adult years, when she observed what we had became and we secretly hoped that she was proud of what she saw. I suspect that as people watch Tokyo Tower, they will see aspects of their own mothers in Okan, and they will see shades of themselves in her flawed but determined son, Masaya Nakagawa (Mokomichi Hayami), affectionately called Ma-kun throughout the series. It is rare that a television has the power to do this so effectively.

The series is based on Lily Franky’s semi-autobiographical novel, which has sold over two million copies. Its eleven episodes are competently directed by Tetsuji Kubota and Masaki Tanimura. The series covers roughly ten years in the lives of Okan and Ma-kun. It begins during Ma-kun’s final year in high school and takes viewers on a journey from a small village in the countryside to the metropolitan juggernaut that is modern-day Tokyo. One of the first things Ma-kun sees on his bus ride into Tokyo is the bright, majestic structure known as the Tokyo Tower. Throughout the series, the tower’s significance to Ma-kun waxes and wanes, but it remains a constant reminder of the hopes and dreams he had when he first arrived in Tokyo and of the person he was when he arrived. As another character reminds him later on, Tokyo Tower is where Tokyo began for them. Each of the early episodes depicts a part of Ma-kun’s transformation into an adult. In a surprising but realistic twist, Ma-kun continually defies our expectations for a character such as he. For each positive step he takes, there is the possibility of regression, and instead of having blossomed fully by the end of the series, his final monologue makes it clear he is still very much a work in progress. I suspect that’s true for many of us.

In Tokyo, Ma-kun attends art school, and like many people away from home for the first time, he struggles to keep himself motivated. His experiences reminded me of friends from high school who partied too hard and cut too many classes just because they could. Like Ma-kun, it was just as important for them to take advantage of the fact that they were finally away from home as it was for them to get a degree. Later in the series, Ma-kun will struggle financially and find himself sleeping in a park during what has to be the lowest point of his life. The experience humbles him, and he emerges from it a better person.

As the years in Tokyo go by, more and more people enter Ma-kun’s life, and as a result they too are equally touched by his mother. Okan takes a personal interest in each of her son’s friends, and she gets great joy when she sees the delight that appears on their faces as they indulge themselves in her culinary creations. Towards the end of the series, she’ll look at each of them and call them her other sons. It’s truly touching, and I couldn’t help recalling the way my own mother has responded through the years to her children’s friends, many of whom have also referred to her as mother or as the woman who practically raised them.

The series is not perfect of course. No series can be. It relies too heavily on its soundtrack to elicit emotions when it doesn’t need to, and some of the characters may strike people unfamiliar with Japanese culture as a bit too animated in their verbal reactions and their facial expressions. In addition, not all of the comedy in the series works as well as it should. There are also serious issues that arise only to be resolved incredibly quickly. The series seems to be operating on the assumption that all you have to do is simply decide to change for change to come instantaneously. It is a technique that is unfortunately common in television and films, and it does require a stretch of the imagination to fully accept.

The show’s supporting cast is excellent. The most memorable of these characters are Ma-kun’s estranged father (well-played by Shigeru Izumiya), a next-door neighbor (Ken Ishiguro) who lives a somewhat solitary life while really yearning for love, and Manami Sasaki (Yu Kashii), the young lady who catches Ma-kun’s attention and ultimately his heart. Ma-kun’s father is particularly noteworthy. He is what many would consider to be a deadbeat father, and throughout the series, he continually refers to his son as runt, certainly not the most endearing of terms. He comes across as a man with a lot to say but an inclination to remain silent. It is as if the words are there, but the will to voice them is not. With his balding head and noticeable limp, he seems an odd choice for a ladies man, yet if you watch Okan as she looks at him, it is clear that there is more to him than meets the eye. The series never explains just what that is or why Okan loved his as much as she did, yet that’s as it should be, for some things can only really be understood by the people that experience them. That their relationship deteriorated is as much a blessing as it is a tragedy. It’s hard to fathom just what Ma-kun would have become had his father stuck around longer.

The heart of the show is of course Okan. As played by Mitsuko Baisho, Okan is consistently upbeat, yet never blind to what goes on around her. She doesn’t have an unrealistic view of her son despite her belief that he can do great things if he works hard enough. In one particularly nice scene, she tried to explain her son’s flaws to the young lady she hopes will one day marry him. Like most television or big screen mothers, Okan has a love of life that is contagious, and she seems incapable of slowing down. In truth, she can’t afford to. However, her unending optimism and utter diligence infect everyone who comes in contact with her. In one episode, we see just how much she has influenced the show’s supporting characters, as each of them begin to reflect upon the own relationships with their mothers. And while what transpires doesn’t always adhere to the Hollywood script for family reunions, what does occur is at the very least the first step in a long thawing out period. I suspect reunions are like this more often than not.

Roles such as Okan are harder to play than they look, and later in the series Baisho is called upon to play entirely different moments, ones filled with a great deal of intensity and tragedy. She nails every one of them. As Ma-kun, Hayami matches Baisho rather well, and it is through his often more subtle performance that we can see just how great of a person Okan really is. We watch as his character matures, and with each episode, Hayami makes subtle changes to the way he portrays Ma-kun, changes that clearly illustrate that a lesson has been learned and that one of life’s corners has been turned.  The two of them are a pleasure to watch. And Tokyo Tower is a powerful series. It will draw tears from those who tear easily and near tears from those who are less willing to show that kind of emotion. Few who see it will be unmoved, and I suspect that many who watch it will be filled with the sudden urge to call home, if for no other reason than to say a simple thank you. Tokyo Tower is definitely worth hunting down. (on DVD in Regions 1 and 3)

*Tokyo Tower is in Japanese with English and Chinese subtitles. The English subtitles are excellent until the final episode. It’s as if someone took a holiday, and the employee who stepped in relied exclusively on a primitive Internet translation service. Prepare to be disappointed and to have to work harder than you should to understand the final episode.
Posted by Azrael Bigler at 9:00 PM

Labels: 3 and a half stars, Japan, reviews