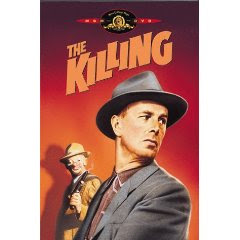 Stanley Kubrick’s 1956 film The Killing achieves something rare in a heist film. It makes you care about a group of people planning a crime. Think about it. How many times have you watched a heist film and marveled at the intricacies of the crime itself while not caring one way or the other about the people attempting to pull of the caper? I can think of plenty of examples off the bat, such as David Mamet’s The Heist (2001), Frank Oz’s The Score (2001), and F. Gary Gray’s 2003 remake of The Italian Job. Too often these films are about overly attractive criminals who seem far too young to be experts in their field cracking jokes or trying to outsmart each other. More times than not, I simply don’t care. I don’t lump the Ocean’s 11 series in this category because these films successfully created three unscrupulous villains for the audience to root against.

What separates Kubrick’s film from others films in its genre is its characters. They are not young or full of life. They don’t have computer expertise or dress like the just stepped out of a recent edition of GQ. In contrast, they are men beaten down by age and broken dreams. They view themselves as personal failures, as people for whom that special, lucrative lucky break simply never surfaced. More than one of them speaks of their future ill-gotten gains as representing the fulfillment of their promises to loved ones. I suspect most men will at the very least empathize with their feelings, for most men have at one point in their lives spoken of their potential in rather fantastic, almost mythical terms, promising their fiancées or brides a life free from financial worry and replete with material belongings such as jewels and diamonds. Instead, the would-be thieves in The Killing carry their perceived failures on their shoulders for all to see. And yet when they talk of the lives they hope to lead after the robbery, their faces light up, as if they had just drunk from the fountain of youth.

Also working in the film’s favor is the way the film is structured. We first meet the men and get acquainted with their lives. We meet Johnny Clay (Sterling Hayden), recently released from jail and just reunited with his girlfriend, a sympathetic woman named Fay (Coleen Gray) who explains her decision to wait for Johnny for five years by saying, “I’m not good enough for anyone else.” The scene is quite emotional. Then there’s Mike O’Reilly (Joe Sawyer), whose wife is sick and bedridden. In one scene, he promises her their lives will vastly improve soon. She just wants him to take good care of himself. Perhaps the most unfortunate one of them all is George Peatty (Elisha Cook Jr.), whose wife Sherry (Marie Windsor) begins to hurl insults at him the moment he returns home. While the audience will automatically recognize a villain when they see one, George only sees a woman whose unhappiness is due to his personal failure to make good on his pre-marriage promises. To keep her happy – at least in his mind – he talks when he shouldn’t and reveals way too many details about the upcoming scheme. These details find their way to Val Cannon (Vince Edwards), Sherry’s man on the side.

Most films like The Killing build up to a robbery and then show it in its entirety. However, The Killing uses a different, much more interesting approach. Just when you think the robbery is about to take place and sometimes even after it has started, Kubrick takes you back in time to show you either an aspect of how the crime took shape or a conversation that somehow resonates well after it is over. One such conversation involves Johnny and his long-time friend Marvin Unger (Jay C. Flippin), as they discuss the fact that after the robbery, they will likely never see each other again. To them, it’s the equivalent of a father saying good bye to the son he never got the chance to raise properly. We also meet the two people recruited to help out with the crime, and neither of them are hardened criminals. One, a man named Maurice Oboukhoff (Kola Kwariani), even speaks quite idealistically of the importance of love and happiness. And yet we are not made to marvel over the complexity of the planned caper or over the ingenuity of the criminals themselves. Rather we watch their actions with a degree of tension, knowing how little it would take for their efforts to fail and that others are somewhere plotting against them.

If there is a weakness to The Killer, it is its final ten minutes. We’re asked to believe that a character that had been as meticulous as someone could possibly be up until then would suddenly stop being so. It’s quite a stretch. Moreover, once he does, it’s not impossible to predict how it all will end. In this respect, the film is a product of its time, for it would be a few more years before the Hayes Code was completely dismantled, and therefore, the idea that a villain could end up on top was still somewhat taboo. However, Marie Windsor’s performance, reminiscent of Barbra Stanwyck’s in Double Indemnity, is proof that the code was starting to crack. The Killer remains a fascinating, tense film about ordinary people making an extraordinary yet foolish attempt at greatness, at the kind of life they believed would be theirs through hard work and perseverance. I may not have ever rooted for them, but I certainly understood where they were coming from. (on DVD)