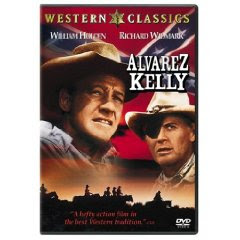 "Alvarez Kelly, the Irish Señor
Kept pursuin' his hobbies while pursuin' the War
Give him rum in a glass and some fair lass to adore
And he couldn't care less what they were fighting for"

-from “Alvarez Kelly” by the Brothers Four

Alvarez Kelly will never be considered in the same league as great westerns such as The Good, the Bad, and the Ugly, The Searchers, and Unforgiven, and there’s a reason for that. Great westerns are usually driven by strong, complicated characters during extremely trying times. Some are them are drifters who decide to fight for something noble; others are ordinary men driven to armed conflict by difficult and often life-threatening circumstances. Alvarez Kelly (William Holden) is neither of these. In fact, when it comes to the American Civil War, he seems to have little interest in which side is eventually the victor. As the film opens, he and his band of Mexican-American drovers are driving a herd of cattle intended for Union soldiers. He would just as easily do the same for Confederate soldiers, but, as he puts it, “Their money’s no good.”

One of Kelly other vices is women. He seems to have never met one that he didn’t like instantly. And once he likes a woman, sweet, wooing words gently fly from his lips and cast a magical spell on their intended target. The women is Alvarez Kelly have all heard words like his before. One woman, Charity Warwick (Victoria Shaw), even asks him point blank if he “undresses every woman” he meets. It’s a charge he can’t deny. However, for a variety of reasons, every woman he sets out to entice falls victim to his verbal charms. Kelly is a realist, however. He knows that jumping from woman to woman will not bring him complete happiness, but it does, as he tells Major Albert Steadman (Patrick O’Neal), “make it easier [for him] to pass the time.” Kelly’s last interest is whiskey, and when he is not rounding up cattle or dancing with the most recent woman to catch his eye, he is rarely seen without a drink in his hand.

Edward Dmytryk’s film follows Kelly after he is captured by Confederate soldiers and forced to help them steal the cattle he delivered to Union officials. He’s told that Confederate soldiers in Richmond are starving, but in keeping with his character, emotional appeals fail to impress him. When he is finally offered financial incentives, he remains resolute, for after all, the money they are offering to pay him is the same money that they stole from him when they captured him, and his principles just do not allow him to work for the same money twice. They do, however, allow him to take on this undesirable task after his life is threatened, for Kelly is ultimately out for self-preservation above all other things.

Unfortunately, Alvarez Kelly is a rather uneven film. It is strongest when it explores the relationship between Kelly and Confederate Colonel Tom Rossiter (Richard Widmark). While Kelly is clearly the character that the film wants viewers to identify with, it is actually Rossiter that is the more sympathetic character, for Kelly is out for himself, while Rossiter is trying to save soldiers from starvation. In addition, while Kelly’s goals in life do not require much of a sacrifice on his part, Rossiter’s dedication to the Confederacy has cost him not only an eye but also the affection of the woman he loves. And while it is true that Rossiter uses rather ruthless methods to finally get Kelly to agree to undertake the mission, he does so for the purpose of saving lives, and not for personal glory. I’m not justifying torture, but it seems to me that if Kelly were the one doing it, we would accept it as a necessary evil. It seems only reasonable then that the same be said of Rossiter’s actions.

Where Alvarez Kelly fails is in its depiction of women and African-American slaves. The women in Alvarez Kelly are all either spies willing to do anything for the South, prostitutes, or women of weak (albeit sympathetic) character. Kelly has only to begin talking for a southern belle to throw herself at him, and this happens, very little screen time is given to these characters. Therefore, none of them are very well-developed, existing simply to allow Kelly to show either how irresistible he is to the opposite sex or how easily he can fall under a woman’s spell. The latter seems a bit far-fetched, as Kelly seems too smart to be fooled by a woman like Ms. Warwick, especially after suspecting early on that there is more to her than meets the eye. But there he is a moment later locking lips with her and letting his guard down. In another scene, Kelly begins a lesson in how to drive cattle by saying, “Cattle are like women.” He goes on to say why, but it’s not worth repeating. As for the slaves in the film, they rarely speak and seem to be protecting the system that is keeping them enslaved, as if slavery were not as bad as the North was making it out to be. That Steadman then uses a female slave as a shield to escape behind only muddies the water even more.

Alvarez Kelly, like many other westerns, ends with a grand battle. The scene is well shot, but it lacks the emotional punch that it needs to make up for the film’s shortcomings. By the end of the film, I didn’t much care what happened to most of the characters, and I didn’t feel any particularly warm feelings for any of them either. I suppose the ending of the film is designed to make the audience see the nobility of the southern culture – that one’s solemn oath is stronger than one’s personal grievances. That’s a fine moral, I suppose. It’s just too bad that by that point in the film everyone can see it coming. (on DVD)