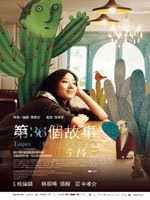 Like the French film Amelie, which it seems to have drawn inspiration from, Hsiao Ya-chuan’s Taipei Exchanges is a quirky film filled with quirky characters in rather quirky situations, and this is not necessarily a good thing. In films, quirkiness and eccentricities must ultimately serve a purpose – perhaps they provide obstacles for characters to triumph over, personality flaws for more sympathetic characters to be able to see through, or motivation for particular characters to finally make necessary changes in their lives. Think of the effect that the gnome has on the father in Amelie or Helen Hunt’s ability to love Jack Nicholson at the end of As Good As It Gets. Each of these reactions made sense for entirely different reasons. I’m not sure I can say the say thing for the events that transpire in Taipei Exchanges, partly because so little screen time is devoted to character development.

The film primarily focuses on two characters whose lives have not turned out exactly as they thought they would. First, there’s Doris (Kwai Lunmei), a young woman who studied art design but who has always yearned to be the owner of a café. And then there’s Doris’s sister, Josie (Lin Zaizai), a woman who studied business trade but didn’t care much for it and who now helps her sister at her café. We learn these facts from an unnamed and slightly annoying narrator who seems to be able to tell us exactly what these two characters are thinking. Personally, I would much rather have heard the characters speak for themselves. In addition, the narrator briefly gives us the impression that Doris is some kind of master at making both éclairs and coffee. Fortunately, the film avoids the cliché of her actually becoming one.

Much of what transpires in the film is the result of Josie’s spontaneous decision to “exchange” a Thai cookbook that the neighborhood Bureau Chief takes an interest in for clean draining pipes. The deal is simple: The Bureau Chief gets the book, and his son does the café a favor. The successful negotiation inspires the business woman in Josie, and she gets the notion of making Doris’s Café into an exchange center. Under this plan, nothing in the store, with the exception of food and drink, will be for sale. If a customer sees something she wants, she can trade for it. In most movies, a brainchild such as this one would almost immediately begin to bring in throngs of customers; fortunately, it doesn’t. It does however pique the interest of Taipei’s tourism industry, despite the fact that the idea has not proven to be profitable. On a more welcoming note, it also brings in one particular customer whose stories of traveling all over the world both intrigue and fascinate Doris, rekindling her long-dormant desire to see the world. Viewers may wonder whether it is the stories or the man that interests Doris more. At the same time, we get brief glimpses of the Bureau Chief’s son from time to time. Apparently, his interest in the café extends beyond mere enjoyment of coffee or tea. Given these two storylines, it’s not hard to predict how the film will ultimately end.

Taipei Exchanges, a rather odd English title given that fact that the film’s Chinese title is 36 Stories, never quite gets off the ground. Many scenes lead nowhere, and too little time is devoted to establishing the relationship between the two potential pairings. Instead, we see the two ladies struggling to find the right design for the café, but I never felt that they wouldn’t find it, and despite their initial financial difficulty, I never felt the café was in danger of closing, which is unfortunate because such concern would have made the film more involving. In addition, Josie comes across as both a bit greedy and rather moody. In truth, how else can she come across when all she does is pout because she isn’t getting what she wants out of the exchange program she has set up. Just what the Bureau Chief’s son sees in her is a mystery to me because the film devotes practically no time to their blossoming romance. Much more time is given to Doris and the effect that her customer’s stories have on her. However, it’s one thing to be interested in the stories that a well-traveled journeyman has to tell; it’s quite another for that interest to develop into true romantic feelings. Therefore, when it did, it seemed more like a cheap film cliché than a logical development.

The film also has several scenes in which average people are asked questions relating to the themes of the film. It reminded me of a technique that was used in the first season of Sex and the City. It’s meant to make the events that are transpiring during the rest of the film more universal, yet here it doesn’t work as well. The film is more successful when it allows supporting characters to express their views naturally. This is accomplished several times by having the two sisters’ mother pose rhetorical questions to her daughters without looking at them, which results in strangers thinking the questions were intended for them. It’s a humorous gag, and the insights elicited are truly thought-provoking, yet what does it say about a film as a whole when some of the film’s best moments are incidental exchanges that have little to do with the main story?

Fans of the film, and there are many of them here in Taiwan, may argue that Taipei Exchanges is not meant to be about relationships or love, that it is meant to be about the two sisters discovering themselves. This is a fair point, and there is certainly evidence to support it. Doris goes from being overly concerned with dollars and cents to being dazzled by amazing stories of faraway places, and as a result, her subsequent actions make a degree of sense. However, too little time is devoted to showing Josie’s new and improved maturity. She gets both the business and the guy, but I was never completely convinced that she deserved either. Taipei Exchanges is a noble effort at showing how dreams can be set aside and then rediscovered. It’s unfortunate that the trip is such an uninvolving one. (on DVD in Region 3)

*Taipei Exchanges is in Chinese with English subtitles.
Posted by Azrael Bigler at 8:24 AM