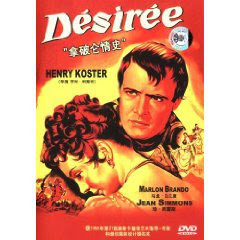 Desiree (U.S., 1954) – Desiree Clary (Jean Simmons) is apparently so wonderful that two men fall head over heels in love with her the first time they meet her. I suppose viewers will either accept this plot point or they won’t. Personally, I didn’t believe it either time, and that’s a problem in an epic film about the woman who was loved by Napoleon Bonaparte (a miscast Marlon Brando) and Jean-Baptiste Bernadotte (Michael Rennie). The film takes us from Napoleon’s initial courtship of Desiree to his disastrous and ill-fated return from exile. The film is slow, and Brando’s portrayal of Napoleon does not offer viewers the slightest clue as to why someone like Desiree would fall in love with him. On the plus side, Simmons plays Desiree with energy and determination, and her performance is almost enough to make me recommend the film. Alas, the film, despite its promising subject matter, never quite rises above the ordinary. (on DVD)