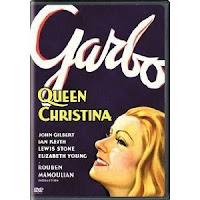 Director Rouben Mamoulian’s pre-code film Queen Christina ends with a glorious shot of Greta Garbo looking westward, a symbolic gesture indicating that her character, Sweden's Queen Christina, is looking toward the future. Her face appears stoic, without even a hint of sadness or regret, which is as it should be at this point in the film. The problem with the scene is this: She looks too radiant, and I was immediately reminded of my earlier inability to comprehend why numerous characters had erroneously thought she was a man. One character in particular sits right next to her in an inn, looks straight at her, and doesn’t recognize that the person in front of him is a woman. And this is no ordinary woman he’s looking at – it’s the queen of Sweden. Granted, the character in question, as well as his entire entourage, is not from Sweden, so perhaps he deserves a little leeway, but the other patrons of the inn are all Swedish, and none of them recognize their queen, in spite of the fact that her face adorns their currency. Now I realize that movies often require viewers to take a leap of faith, but Greta Garbo dressed in musketeer garb still looks like Greta Garbo.

Queen Christina begins in 1632 during a long struggle between Sweden and other European countries. In keeping with the times, the present king joins the fight and is unfortunately fatally wounded in battle, setting the stage for his young daughter Christina to ascend to the throne. The court is assured that Christina, despite her gender, has been raised in the same manner as a boy. She is therefore said to be accustomed to war and cannon fire. This pleases the nobility and the men of the church, and soon Christina is crowned King, not Queen. Fast forward several years. The war is still raging, yet Sweden seems to be winning, thanks in no small part to the efforts of her cousin, the extremely popular Prince Charles (Reginald Owen), and, as Christina (Garbo) observantly notes, the sacrifice of everyday Swedes. Prince Charles, being a decorated war hero and heir to the throne, is so popular with both the ruling class and the people that he is the obvious choice to be Sweden’s next king. At the same time, the Queen has begun a secret rendezvous with the incredibly opportunistic and cunning Count Magnus (Ian Keith). The Queen decides that the time has come to end the war and initiates negotiations to achieve that goal. Those efforts have an unintended, but welcome consequence – They bring Don Antonio (John Gilbert), a handsome Spanish ambassador with rather romantic views on the subject of love, into the lonely queen’s life, thus completing the film’s love triangle. The problem is that Antonio is Spanish, and this is a time of intense nationalistic pride.

The screenplay for Queen Christina was written by H.W. Harwood, who was an established playwright at the time, and his script wonderfully captures the behind-the-scenes scheming and arm bending that often accompanies important matters of the state, regardless of whether these involve choosing between war and peace or finding a suitable husband for a queen who is still single. Harwood also pulls no punches when he depicts views on religion and sin in the 17th century. What we see and hear members of the church say in the film is a reminder of just how far religion has come since then and how far it still has to go. Harwood also shows a knack for including subtle, but easily recognizable references to such taboo topics as homosexuality and promiscuity, references that I doubt would have passed the censors just a few years later when the Hayes Code began to be enforced. As for Mamoulian, his use of shadows and light is quite impressive, and he gets very convincing performances from the entire cast.

Queen Christina has a very interesting first act, during which we see the weighty issues that people in power must grapple with. Its second act is sweet, hopeful, and slightly ludicrous. If you’re like me, you’ll find yourself scratching your head in disbelief more than once. However, there’s no denying the chemistry that these early scenes between Christina and Don Antonio establish – once he figures out that she’s not a he, that is. The film finishes with a serious and potentially dangerous flurry of events, giving it a surprisingly powerful, if not slightly predictable conclusion. Anyone familiar with either conventional films or the works of Shakespeare will see the ending coming a mile away. This is not necessarily a bad thing, though. After all, who wouldn’t want to be compared to the Bard? (on DVD)

Labels: 3 and a half stars, Greta Garbo, reviews, Rouben Mamoulian