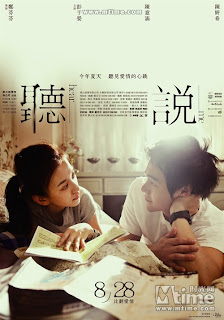 With his debut film, Director Cheng Fen Fen does something rare: He demonstrates an enormous amount of faith in his audience. It’s not that he bombards viewers with tragic or graphic images of suffering or devastation or that he presents viewers with a particularly challenging story. It is that he trusts his audience to handle long moments of silence. Consider what he could have done. He could have used a narrator or a voice over like the one used in the excellent documentary Sound and Fury. Alternatively, he could have made the male lead a character like James Leeds in Children of a Lesser God, a teacher who speaks aloud as he reads the words that his deaf girlfriend Sarah Norman is signing in front of him. Cheng rejects both of these techniques, though, and Hear Me is a stronger film because of it. In pivotal scenes, we see characters whose emotions are expressed in their hands and faces in such a way that it is perfectly clear what words and emotions are being conveyed – there is excitement and joy in the hands of a young man falling in love, worry and desperation in moments of emotional confusion, and the loud slapping of the side of a young woman’s hand against her chest when, in a drunken state, she angrily confronts her sister. There is a genuineness to these scenes, all filmed without background music, as if we are getting a look into how hearing impaired people actually communicate with each other, and not the convenient, audience-friendly way many films and television shows, from Walker to The West Wing, have presented it to us.

Hear Me begins – as so many love stories do – with a chance encounter. This one occurs at a swimming pool. There, a young woman named Xiao Peng (Michelle Chen) prepares to compete against other tournament hopefuls for the honor of being able to compete in the Deaf Olympics, which not so coincidentally was held in Taiwan the year the film was released. Watching her excitedly is her sister, Yang Yang (Ivy Chen). When her sister comes in first, Yang Yang runs excitedly to pick up a flag and wave it proudly, as if her sister had just won a gold medal. Perhaps she’s just practicing for what past experience has led her to expect. After all, we later see that her sister has enough medals and trophies in their home to cause even the most cautious of fans to be overconfident. As the practice winds down, a young man named Tian Kuo (Eddie Peng) arrives, bringing with him a large box full of “lunch boxes,” which in Taiwan usually means a lunch set of rice, meat, and vegetables in a small rectangular take-out box. Tian Kuo, who can hear perfectly and also use sign language, sees Xiao Peng and her sister talking (signing), approaches them, and signs to them that the food has arrived. In less time than it takes for someone to bring Tian Kuo the money for the order, he is utterly enchanted by Yang Yang, and it’s not hard to see why. In just one scene, Yang Yang displays an amazing smile, natural beauty, a spirit that is alive and full of hope, and incredible kindness.

However, she does not appear to have the greatest luck riding a scooter, for someone who is not always careful – which Yang Yang isn’t - can only dodge the somewhat crazy traffic and the crowds of pedestrians that fill the streets of Taiwan for so long. As luck would have it, though, Yang Yang’s moment of automotive difficulty is witnessed by a departing Tian Kuo, who speeds back to help her just as a knight in shining armor should. He quickly – and not entirely safely – rushes her to the hospital and then before he leaves makes sure to get her MSN address. And thus begins Tian Kuo’s slow, sweet, sometimes awkward courtship of Yang Yang, for she is a woman determined to show her independent side, even if that means not allowing Tian Kuo to fully show his overly romantic side. To Tian Kuo, the lunches he brings for her are gifts from his heart. How is he supposed to react when the one he loves keeps insisting on paying for these gifts? To him, it’s as if she is denying him every time she requests to reimburse him. He doesn’t realize just what being able to pay for those meals means to Yang Yang. Despite a few setbacks, he keeps waiting for an opportunity to confess his budding feelings for her, and when one finally comes, he takes full advantage of it. I won’t spoil the scene in this review, but I will say it’s quite magical.

Not everything in Hear Me works as well as it should. It’s hard to believe that a father – even a father who is a missionary, like Yang Yang and Xiao Peng’s is - would just leave his two daughters alone to carry out missionary work in Africa. It’s even less believable that he would not return after some of the events that transpire in the film. However, his presence would likely have distracted from the emotional exchanges that take place between the two sisters, as each much come to terms with certain particularly difficult truths. Another slightly problematic moment occurs when Tian Kuo dons a tree costume in an attempt to win Yang Yang back. The act just doesn’t work, not even for a character as eccentric as Tian Kuo. However, the rest of Hear Me hits all the right notes. I especially liked Tian Kuo’s parents, who have such chemistry that you’d think they had been performing comedy together for decades. They are just as effective during more serious moments, such as when they discuss whether or not they could accept their son dating someone who was deaf. After all, Tian Kuo’s mother points out, Tian Kuo can use sign language; they can’t.

If Hear Me seems long at times, it’s only because the film has several stories to wrap up, and Xiao Peng’s is just as important as Yang Yang and Tian Kuo’s. In fact, while I enjoyed the scenes between Yang Yang and Tian Kuo immensely, it was in fact the conversations between Yang Yang and Xiao Peng that resonated the most with me, conversations that for the most part are done non-verbally. Films such as Hear Me rarely win awards, but if there’s any justice, both Michelle Chen and Ivy Chen, both making their cinematic debuts, will be honored in some way for their superb work in the film. As for Eddie Peng, he is quickly developing a reputation as an actor who has both amazing comic skills and better than average dramatic chops. These are three actors worth looking out for, and Hear Me is a film worth discovering. (on DVD in Region 3)

*Hear Me is in Chinese and Taiwanese with English subtitles.
Posted by Azrael Bigler at 7:09 AM

Labels: 3 and a half stars, Cheng Fen Fen, reviews, Taiwan