Review – A Shock to the System 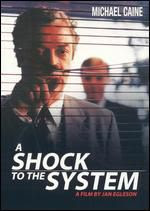 In 1990, the United States – and the rest of the world for that matter – was approaching a cavalcade of rather serious challenges. As the Cold War came to an end, a conflict was brewing in the Middle East, one that would – perhaps erroneously - further shake many people’s faith in their elected officials’ motives when it came to entering into war. Shortly after that, the United States would enter into an economic recession that would ultimately cost then-President George H.W. Bush his bid for a second term. When positive economic numbers eventually returned, the United States would soon experience the wrath of the dot-com boom, which would permanently change business throughout the world and leave in its wake many businesses that had been part of the American landscape for decades. Many young people in their twenties became millionaires overnight, and many older workers whose jobs had previously been thought to be secure were suddenly confronting the feeling that they were no longer necessary to their company’s survival, as if technology had suddenly rendered them, as well as their years of experience, as obsolete as the ink typewriter. I don’t think it’s inaccurate to say that America has yet to completely recover from this series of events.

It’s slightly ironic then that 1990 saw the release of Jan Egleson’s thoroughly interesting A Shock to the System, a film that accurately depicts the rise of the first completely computer-savvy generation and the ruin it will bring to many of those at the top. And yet, the film is not entirely the heroic depiction one would expect of a movie with this context. Viewers looking for an uplifting portrayal of a veteran worker trying frantically to save the jobs of those he had worked with for years, one like 2004’s In Good Company - are in for quite a surprise. That’s because Graham Marshall (Michael Caine), despite beginning the film as a sympathetic character, is no saint. In fact, he’s far from it.

I won’t describe the beginning of the film except to say that after being denied a promotion that he and many of his co-workers had considered him a lock for, Marshall finds himself standing in a subway station being accosted by a rather aggressive panhandler. Te be fair to the unfortunate fellow, he simply asked the wrong man on the wrong day for something that was already causing him a great deal of panic. However, the man’s subsequent decision to confront Marshall, to perhaps teach him a lesson in civility, proves fatal, after Graham “accidentally” pushes him under an oncoming subway train. Surprisingly, Graham gets away with it. However, instead of being horrified by his actions, Graham is empowered by them. And if he can get away with it once, who’s to say he won’t get away with it again? Plus there’s that annoying, greedy, ungrateful wife of his who seems intent of driving him to the poor house. In one scene, she smiles lovingly and says, “I forgive you for failing.” Not exactly the best thing to say to a man who has developed an appetite for murder.

Perhaps one of the most remarkable things about A Shock to the System is that it never allows viewers to completely turn against Marshall. We see the way his new boss Roger Benham (Peter Riegert) systematically strips him of all of the status and prestige that he spent years building. We see half of his office turned over to Henry Park (Philip Moon), one of Benham’s chief assistants, simply because he knows more about computers, and we witness the callous way Benham makes George Brewster (John McMartin), the man whose job he took, stand in the hallway waiting for Benham to have enough time to see him. To see Brewster in that scene is to truly see a broken man. Later, he’ll utter the most shocking statement in the entire film – “Without work, I’ll be dead in a year.” This remark is made to Marshall, yet Marshall does nothing at all to help him. Instead, he finds Brewster a secret part in his grand revenge scheme. After all, Marshall reasons, Brewster is not his friend. He’s just the man who gave him a gold lighter so that Graham could light his cigarettes with it.

As the plotting begins, A Shock to the System moves away from social or economic issues somewhat and focuses on the question of whether Marshall will get away with his crimes or not. This seems appropriate, and it allows Michael Caine to completely rule the screen. As Marshall, Caine feigns feelings for his much younger co-worker Stella Anderson (Elizabeth McGovern) in such a realistic way that we’re reminded of the charm he exhibited years earlier in Alfie and Hannah and Her Sisters. In addition, he plays Marshall as a man capable of being both inspiring to those who work for him and menacing to those who stand in his way. When Stella is an asset to him, she is his “apprentice” and he the sorcerer; when she suspects him, we indeed fear for her well-being. That we never completely turn against Marshall can be attributed to Caine’s incredible performance, as well as Andrew Klavan’s clever screenplay. Marshall’s duality actually impresses his superiors, proving to them once and for all that Graham indeed has the qualities they are looking for in a department head. All it took for them to notice was a few acts of homicide. Abracadabra indeed. (on DVD)