Review – The Inn of the Sixth Happiness 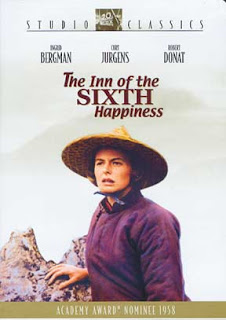 People are looking for something they can’t find in their own country – this is how Mark Salzman explains Westerners’ interest in China in Iron & Silk, a film based on his experiences teaching there. Perhaps he’s on to something. I have often heard people explain that living or working in countries like China, Japan, and Taiwan represents returning to a simpler, more relaxed way of life. They feel safe walking the streets at midnight, they have their evenings free, and they feel respected in a way that they hadn’t felt previously. Others are drawn to these countries because of what they see as a higher, nobler purpose – missionary work. Gladys Aylward, the central character in Mark Robson's The Inn of the Sixth Happiness, appears to have been drawn to China for both reasons. In England, she is believed to be qualified only for housekeeping; in China, she is afforded the opportunity to be much more.

The Inn of the Sixth Happiness, based on Alan Burgess’s novel “The Small Woman,” opens with Gladys Aylward (a great performance by Ingrid Bergman) stepping off a train in London. She is alone. We see her wander through London a while, finally arriving at the China Missionary Society, where she is told not only that she doesn’t know what she would be getting herself into, but also that she in not up to the task of being a missionary in China. To her credit, Gladys listens patiently and politely as the job she had hoped to get is denied her in a somewhat patronizing manner. Instead of receiving a ticket to the land she feels such a strong pull toward, she is given the address of a man who is in need of a housekeeper. On her way to begin the kind of job she had undoubtedly hoped to leave behind forever, she stops by a travel agency. There, she convinces an agent to accept a down payment on a ticket to the land she feels it is her destiny to be in.

When Gladys finally reaches China, she is taken to Yang Cheng, a village in the north that bares no resemblance to the more modern cities she is used to in England. Some of her first experiences include being chased by a group of women for touching one of their children, being forced to flee from a group of angry men after she accidentally enters a small building where women are forbidden, and witnessing a public beheading, which to her horror the crowd cheers loudly. Shaken and confused, she is comforted by Jeannie Larson (Athene Seyler), an older missionary, who tells her that the problems in China will be helped by the Lord, whose word they are here to spread. To accomplish this task – daunting to say the least – they plan to restore an abandoned and neglected building and turn it into an inn. To convince men of the mule trains to stay at their inn, Ms. Larson and Gladys are going to offer them something that other inns cannot – stories from what they believe is the most important book ever put down on paper.

I expected The Inn of the Sixth Happiness to be about Gladys’s efforts to spread the Gospel, but I was wrong. As she explains it, Gladys wants the people of Yang Cheng to be happy and healthy above everything else. To her, one’s religion is secondary. So instead of showing viewers Gladys reading the Bible or trying to convert people, the film shows her tending to the sick, attempting to convince parents not to bind their daughters’ feet, and working for the fair treatment of prisoners. She has three allies in her endeavors; Yang (joyfully played by Peter Chong), Ms. Larson’s assistant for the last twenty years; Hsien-Chang (Robert Donat), the head of the village; and Lin Nan (Curd Jurgens), an army captain whose responsibility it is to ensure that national policies are followed, even in a rural, more traditional village like Yang Cheng. The heart of the film is Gladys’s relationship with the latter two characters and their changing attitudes towards her. Seeing her go from being a foreigner who evokes fear and distrust from those around her to being a trusted and respected member of the community is quite moving.

A few aspects of the film may present problems for viewers, though. First, present-day audiences may have a knee-jerk reaction to the idea that it took a British woman to bring about change to Yang Cheng, as people are more comfortable nowadays with the idea that change came from within. In addition, the film uses a technique that takes some time to figure out. Because The Inn of the Sixth Happiness was made at a time when subtitles were rare in Hollywood films, we hear the characters speaking to each other in English when they are in fact speaking Chinese. It may help viewings to keep in mind that the character of Hsien-Chang cannot speak English at all. When he speaks with Lin, they are speaking in Chinese. This is important because later Gladys has to have Yang translate for her when she speaks to Hsien-Chang and Hsien-Chang cannot understand a single word she says. Only later, after Gladys has learned Chinese – and learned it amazingly well – do she and Hsien-Chang converse in English. My last problem with the film had to do with the actor portraying Lin. Curd Jurgens simply does not look the part. It is true that with his chiseled frame and muscular, python-like arms, he indeed looks like a soldier. The problem is that he does not look or sound like a Chinese soldier, not even a Chinese soldier who is half Dutch. However, what Jurgens lacks in appearance, he more than makes up for in strength and conviction, delivering speeches with such patriotism that one can clearly see the love and dedication that Lin has for his country.

The Inn of the Sixth Happiness was made at a time when sentiment toward China was actually more negative than positive. Just seven years after Chinese soldiers met American soldiers on the battlefields of Korea, an event that may in fact have saved Taiwan from invasion, Hollywood was much more likely to make a favorable film about Japan that it was China, especially in light of the revolution that had swept the Chinese Communist Party to power in 1947. Perhaps these sentiments explain why this film and Robert Wise’s 1966 film The Sand Pebbles take place prior to that event. In the end, a film rises and falls based on its ability to consistently and effectively resonate with successive generations of filmgoers, and I’m happy to say that The Inn of the Sixth Happiness accomplishes this. Its characters are interesting, and the issues it deals with are powerful. Its climax is also particularly effective. By the end of the film, I confess I still didn’t know why Gladys had felt such a strong connection with China, but I was glad she went. (on DVD)

Labels: 3 and a half stars, Ingrid Bergman, Mark Robsen, reviews