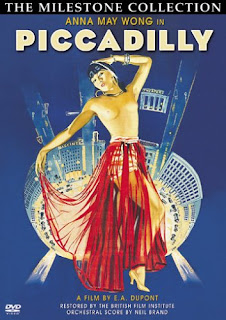 There are moments that have the power to make or break films, concepts that an audience either buys into or doesn’t. Ewald Andre Dupont’s film Piccadilly contains one of these moments. The film asks you to believe that a woman named Shosho (Anna May Wong) is such a superb dancer that she can single-handedly save a famous, fancy club from financial ruin. This is not an uncommon element in films. In 1927, Al Jolson’s rendition of Mamie at the end of The Jazz Singer was portrayed as making or breaking a lavish musical in spite of the fact that the rest of the cast looked pretty impressive in the few moments we saw them rehearsing. More recently, Ray Charles was depicted in the film Ray as instantaneously revitalizing a fading club by simply sitting at a piano and playing a Nate King Cole tune. However, there is a world of difference between those two scenes and two in Piccadilly. Al Jolson and Ray Charles were unbelievably talented, and therefore I could accept –albeit slightly grudgingly – the power their performances were presented as having. The same cannot be said of Shosho, as least not of her talents as a dancer. Simply put, what should be an astonishing, star-turning number is instead a graceless, odd mix of puzzling shakes, twitches, and twists, certainly nothing that would ensure my continued patronage of the Piccadilly Club. The movie though has a different perspective, as it shows the audience giving her a rapturous standing ovation; later newspapers publish rave reviews proclaiming Shosho as both a dancing wonder and a sensation. It made me wonder if we had seen the same performance. Luckily, Piccadilly recovers from this gaffe and evolves into a film of surprising power.

Piccadilly is the story of an unwise, slightly obsessive attraction and the young woman who sees it as a chance for something better. It’s not her fault really. Who wouldn’t trade the life of a scullery for one of wealth, passion, and fame? The film’s protagonist is Valentine Wilmot (Jameson Thomas), the owner of the Piccadilly Club. He is a man of steadfast principles, refusing to stand for substandard work from his kitchen staff and unwilling to subject one of his employees to the continued harassment of her co-worker, even if doing so leaves him vulnerable financially. The recipient of this act of chivalry is Mabel Greenfield (Gilda Gray), one half of a very famous dancing team and possibly the object of Valentine’s affection. Her partner Victor Smiles (Cyril Ritchard) is infatuated with Mabel and seems on the verge of completely losing control of those faculties that prevent one from accepting that no means no. One day after they have completed their long impressive dance number and are being drowned in applause, he grabs her arm and kisses it. He continues up the arm and onto the area just below her left shoulder. All of this happens under the watchful eye of Valentine, who determines to put a stop to it. Doing so however leaves him without a strong headlining act, despite Mabel’s tireless diligence and incredible talent.

Into this equation steps Shosho. An employee in the Piccadilly Club’s scullery, Shosho is guilty of distracting the dishwashing staff by dancing on top of a table. When she dances, some of her female co-workers applaud enthusiastically, while the men around her watch her enthusiastically as if mesmerized by her beauty and swaying movements. This is witness by Valentine, who immediately fires her. In addition, he appears to share none of his employee’s fascination with her. Why then is he at the bottom of the stairs seemingly waiting for her to leave that night? Why do the two of them then go back up the stairs together after smiling and acting sweetly toward each other? And why is Valentine suddenly interested in making Shosho part of the act? The answers are not quite what you’d expect.

Piccadilly resonates for several reasons. First, the performances in the film are unlike those in many of the silent films made in the United States. Instead of using exaggerated physical movements to convey emotions, the actors in Piccadilly are more reserved. Their emotions for the most part are kept inside them and feelings are exposed realistically, revealed in blank stares, slight smiles, looks of anger and bewilderment. In addition, Dupont uses longer close-ups to allow his actors to fully realize these feelings. At times, I felt I was watching a talking picture with the sound off. The second aspect of Piccadilly that astonishes is its subtle exploration of issues of race. While the film never explicitly discusses the obstacles standing in the way of Valentine’s relationship with Shosho, it does so by showing their reaction to a clear case of discrimination in a club. In the scene, a Caucasian woman is berated after dancing with a Black patron. To her credit, the woman stands her ground and tries to argue down her antagonist. As the argument get louder, the club’s other patrons make their opinions known, and they are unfortunately not on the young woman’s side. Seeing this, Valentine, who had only moments before boldly displayed his affection in public by gently holding Shosho’s hand, can only say, “I think we’d better go, Miss Shosho.”

At its core, Piccadilly is a love story, and yet it’s difficult to say who’s in love with whom. Does Valentine truly adore Shosho, or is his attraction to her simply lust? Does Shosho love Valentine, or is he simply her ticket to a better life? And what about Mabel, the person Valentine cherished so much that she risked everything he owned for? Are his feelings for her gone? Have her feeling for him vanished? And just who is the moody, angry young man that Shosho spends so much time with, and why is the target of his ill-feelings Valentine? I have to admit I was intrigued by each of these questions, so much so that I was able to look past my inability to accept Shosho as an icon on the dance floor.

I suppose that under close examination the part of Shosho is very similar to some of the other roles that Anna May Wong played in the United States, roles that she had gone to Great Britain to avoid playing. However, just as the best actors are able to, Anna May Wong takes the role and creates something amazing out of it. As played by Miss Wong, Shosho is powerful and manipulative while also being warm-hearted and likable. She is sympathetic while now being completely above suspicion. It is easy to see why many regard Shosho as one of the best roles Anna May Wong ever played. (on DVD from Image-Entertainment and Milestone Films)