Review – The Boy in the Striped Pyjamas 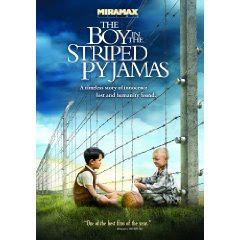 There is a time in every person’s life when he must let go of childhood beliefs and accept reality for what it is. People are not all decent, parents do in fact make mistakes, death is more than just people “sleeping,” sometimes bad things indeed happen to very good people. These are not easy truths, especially for one as young as eight-year-old Bruno (Asa Butterfield). To him, the world is a source of limitless explorations, and all of his adventures take place in a land in which he is perfectly safe from harm. After all, his father is a high-ranking officer, his mother is a decent and loving woman, his sister is caring and supportive, even his housekeeper is witty and kind. It’s no wonder that he flies home from school on the wings of an invisible plane that never crashes or has a single problem. The world is his oyster. If he notices negative events around him, it is most likely through a childlike prism that recognizes police officers as the good guys and the people they arrest as the villains. However, his are not innocent times, and those people he so naively flies past are Jews being rounded up and likely taken to die in Nazi gas chambers.

Early on in Mark Herman’s well made The Boy in the Striped Pyjamas, Bruno learns that his family is moving. This news is accompanied by the usual promises. He’s assured that his new home will be even better than his current one. It isn’t. He’s assured that everyone will be happy. They’re not. He’s promised that there will be other children for him to play with, and while there are indeed other children nearby, he’s told that he cannot befriend them. “These people,” his father explains, “are not really people.” That this explanation could make sense to anyone is shocking in itself, but to expect a child to understand it is rather ludicrous. Perhaps that is why Bruno’s father brings in a “teacher” to educate him and his sister in the same way that other German children are being educated. From this teacher, Bruno’s sister Gretel (Amber Beattie) “learns” that Jews are responsible for every conceivable evil and injustice in the world. She will later tell Bruno that what is going on is “only evil for them.” However, to Bruno, neither his teacher’s nor his sister’s words make sense. Their rabid talk of evil and greedy Jews simply doesn’t gel with either the kind man who cared for him after he fell off his swing or the small boy who sits by himself on the other side of the barbed wire fence that Bruno can see from his bedroom window. When he inquires about the possibility of “good Jews,” his teacher tells him that Bruno would without a doubt be the greatest explorer if he ever found one.

There have been many movies about the Holocaust in recent years; however, The Boy in the Striped Pyjamas is one of the only ones I can recall to explore it almost completely from the point of view of children. As viewers, we know what horrors are taking place in the concentration camps in the distance, but Bruno doesn’t. To him, the people he sees are farmers who just happen to wear pajamas to work. His understanding of the world is further muddied when he sees a propaganda video showing a concentration camp filled with happy inhabitants who want for nothing. He’ll later wonder aloud why that isn’t what he sees when he visits Shmuel (Jack Scanlon), the shy, hungry boy on the other side of the fence that he develops a friendship with.

The Boy in the Striped Pyjamas is both fascinating and difficult to watch. Characters who sound perfectly decent and loving one minute suddenly are speaking in a degrading and threatening way, and the only thing that has changed is the person they are talking to. As I watched the film, I was reminded of something Sam Harris wrote in his excellent book, The End of Faith, that someone can be an ideal husband, father, or boyfriend yet also be a cold-blooded, unremorseful murderer as long as he does not see his victim as being equal to himself, and it is clear that both Bruno’s father and his driver Karl do not see Jews as being equal to themselves. In fact, it doesn’t even bother Bruno’s father if violence against Jews is carried out in front of his children. To him, it’s just something they should view as acceptable.

I will not give away the ending of the film. I will say though that once I knew where the film was going, I felt a tinge of resistance and anger. For some, I have no doubt that the ending will make them hate everything they have liked about the film thus far. However, as events in the film progressed, I realized that the reason I was reacting that way was not because of any manipulation on the part of the writer or director, but because of how much I had grown to care about these characters in such a short time. After much deliberation, I’m not sure the film could have ended any other way. (on DVD)

Labels: 3 and a half stars, Mark Herman, reviews