Review – Dust in the Wind 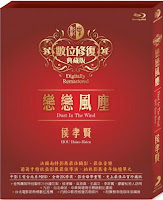 Hou Hsiao-hsien’s 1986 film Dust in the Wind takes place in a mountainous region of Taiwan called Jiufen. It’s a place popular with both locals and tourists, primarily because of its carefully crafted tourist district that has earned a well-deserved reputation for its shopping and restaurants. I’ve been there twice, once in 2005, the second time in 2006, and each time I’ve been amazed by the breathtaking view of a lush valley stretching out to the open sea. The view so impressed me that I recognized it the moment it appeared in Dust in the Wind, and while the shot clearly places the film in a specific location, its story, as well as its central characters, is so universal as to make it possible for the film to be taking place almost anywhere on the island, let alone in any country in the world. Put these two characters in 1960’s New York, and they would fit right in.

Dust in the Wind is set in the 1960’s, during a period of great transition for Taiwan. During this time, Jiufen has two main industries: coal mining and farming. Towards the beginning of the film, we met a sixteen year old boy named Wan (Chien-wen Wang) whose family is dependent upon both of these industries. His father works in the mines, and his grandfather works the fields. Neither of these professions offers the kind of life that would interest Wan. The beginning of the film also introduces us to Huen (Shufen Xin), Wan’s close friend practically since birth. Their eventual courtship and marriage are a foregone conclusion, regardless of their rather youthful ages. Early in the film, Wan tells his father he no longer wants to continue his education; he’d rather go to Taipei to work. From his father’s reaction, it’s likely he didn’t have much of a choice. Those final years in high school can be quite expensive. Huen, perhaps for the same reason, follows Wan to the city. There, Wan gets a job at a printing press, although his job also seems to include preparing lunch for his employer’s son. As for Huen, she finds employment as a seamstress.

The film follows these two characters over the next few years of their lives. Sometimes they grow closer; other times work or Wan’s temperament gets in the way, and like most couples, they must negotiate their way past some rough patches. Through it all, Wan acts as Huen’s protector as best he can, and Huen dedicates herself to helping Wan stay on the right path. Others from Jiufen in similar situations as them – and equally young - join them in Taipei, often working long hours for little pay. In addition, we learn that a friend of theirs has an employer who occasionally beats his employees with a steel pipe. In this regard, Wan and Huen are lucky, for their employers seem like good people. And of course, they have each other – not necessarily in a physical sense, although there are indeed hints that they have both thought about that. Perhaps the belief that they are going to be together in the future removes the necessity to act impulsively the moment they are alone.

While the film is primarily about Wan and Huen, it is also filled with fascinating smaller characters. One such character is Wan’s grandfather, played by the late great puppetmaster Tianlu Li, whose own fascinating life story was made into a film in 1993. In the beginning of the film, the grandfather tries to get his grandson to eat by telling him that if her doesn’t he’ll die and not be able to see his mother or father again. I know what you’re thinking: It sounds terrible. In fact, according to my students, some Taiwanese parents tell their children things that read much worse than this. However, words on a page and words that are second-hand can be deceiving, and Tianlu Li’s delivery made me finally understand the care and love that often lies behind such statements. He has a few other scenes that are equally heartfelt; one having to do with a broken promise is so quietly powerful that it may resonate within viewers for some time. According to IMDB, Tianlu Li made just four films before his death in 1998. It’s a shame that he wasn’t able to do more.

Dust in the Wind would probably not have as much esteem as it does today if it were simply the story of teenage love, which the film is clearly not. In the film, we get a picture of a community shaped by constant instability. Politically, first, there were the Japanese, then the Kuomingtang and the Westerners. Economically, the communities depend on mining, which is not always safe, and the weather, which can wreck havoc with their crops in the form of powerful and often destructive typhoons. And then there’s the perceived – and possibly very real at that time – threat of invasion from the Mainland. Despite all of these obstacles, the family unit and the community survive. Other things, such as love, anger, fear, are impermanent, often changed irrevocably by time. Like dust, they rise for a short time and then settle back down to the earth in a slightly altered state. One need only look at Jiufen today to see evidence of this. (on DVD in Region 3)

*Dust in the Wind is in Min Nan, Mandarin, and Cantonese with English subtitles.
Posted by Azrael Bigler at 7:17 AM