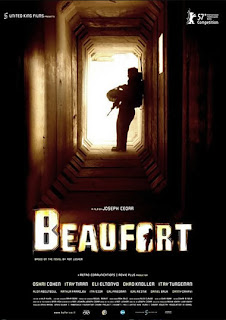 In medieval times, Beaufort Castle must have been the perfect spot for a king to rule from. High above a mountain overlooking miles of vast land, one could easily see an advancing army or approaching rebellion. Fast forward hundreds of years, and what was a strength in one century is a weakness in another. Advanced weapons have made even the most fortified of castles vulnerable to sudden attack, in addition to making the soldiers that guard them sitting ducks. This is the unfortunate position that Israeli soldiers assigned to guard Beaufort Castle find themselves in in Joseph Cedar’s excellent film Beaufort. Every day, these soldiers are at risk of bombardment from all sides at any time. And yet, there atop the mountain they remain, waiting for instructions, hoping for that phone call that tells them its time to abandon the mission and go home.

It is the year 2000, 18 years after Israeli troops first took the castle after what may have been a mix-up in orders. If that’s true, it’s of little comfort to the soldiers whose job it is to safeguard the castle. Each of them carries a weapon, yet they seem to have no opportunity to use it. Simply put, one cannot shoot at an enemy one cannot see. And so, the enemy remains safely hidden behind rounds of mortar shells and a singular, collective name, Hezbollah. It seems to me then that Beaufort is a look at an effort in futility.

We get the sense that the men guarding Beaufort Castle are also victims on a government that knows it must abandon the mountain, yet can’t get up the courage to admit that their position is no longer one of strength. Oh, they could order an air strike, and in the weeks that followed, the enemy’s silence could be interpreted as some sort of victory, but even the most optimistic of hawks would likely have to admit the inevitable. And yet they don’t, at least not at first. When a mine is placed along the road leading to the castle, a specialist is sent in to clear the way. He doesn’t make it back. When a mortar shell takes out a large chunk of wall, in the process killing a much loved compatriot, the official response is to strengthen the walls and for the soldiers to hold their ground. At one point, the order is given to set explosives all around the castle, only for the soldiers to then be ordered not to employ them yet. All the while, young men’s lives are in increasingly greater peril, a fact that each of them acknowledges judging by the looks on their faces.

Cedar does show us moments of calm, and during these moments we get to know the soldiers personal lives. Many of them have girlfriends they can’t wait to see. Others have parents who are completely unaware where they have been stationed. One in particular, Koris (Itay Tiran), has grave doubts about their mission and about the man leading them. Koris longs for an impulsive leader who would make the unilateral decision to simply blow up the castle and lead his men to safety. Lieutenant Liraz (impressively played by Oshri Cohen), brave and personal, yet young and imperfect, cannot issue such a command. It’s simply not in him to do so, and so he waits, knowing full well that in doing so, he and his men are in grave danger.

Beaufort is one of those films that starts slowly and builds in suspense and power. We are aware that their enemy is rapidly approaching and that the enemy’s technology is improving dramatically with each passing day. Sometimes the soldiers have a split second warning, “Incoming. Incoming.” At other times, they hear the hiss of an approaching mortar shell and wait nervously to see how close it will hit. I can only imagine how such experiences affect someone in the long term.

It is easy to stand on this side of the world and be critical of one particular side of the Israeli-Palestinian conflict. I myself have on many occasions railed against the actions of both governments, one for being weak and the other for constantly portraying itself as being forced into action, when military action is always – right or wrong – a choice. In the past, what I often lacked was a personal connection to the people who for one reason or another take up arms and protect what they see as theirs. Beaufort, as well as films like Paradise Now, Kedma, and Death in Gaza, has provided me with a look into such individuals. Such experiences are rarely easy. However, they are ones all of us would benefit from having more of. (on DVD)

*Beaufort is in Hebrew with English subtitles.
Posted by Azrael Bigler at 8:43 AM