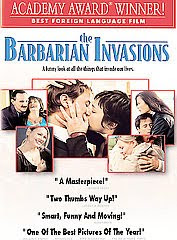 “When I was young I knew everything” – The Verve Pipe, “the Freshman”

I may be wrong, but it seems to me that The Barbarian Invasions is essentially about the symbolic act of passing the world to the next generation, regardless of how ill-prepared that generation may be to receive it or how unwilling a generation is to let it go. Representing the first generation born into a world of nuclear weapons and constantly changing social norms is Remy (Remy Girard), a well-educated professor of history who feels he never quite became the man he wanted to be. Oh, he can discuss historical facts and capture the attention of his peers all right, but it is the attention of his son’s generation that escaped his grasp. This generation – my generation, in fact – grew up watching television sitcoms and playing video games instead of reading the classics novel our parents read or discussing how a little love and compassion might just be enough to save the world. In fact, many of my generation grew up wondering simply how to get rich quick and turned to pipe dreams such as instantly lucrative investments in the stock market and the dot-com industry to help them accomplish it

Denys Arcand’s The Barbarian Invasions begins with a simple phone call to a man whom Remy could not be more distant from, both emotionally and physically, his son Sebastian (Stephane Rousseau), a man who it seems has made his money by short-selling. When told his father’s condition has gotten worse, his initial reaction is to act as if this is not a reason for him to fly out. After all, he reminds his mother, he and his father saw each other a year earlier for about fifteen minutes and ultimately had nothing to say to each other. However, common sense soon prevails, and Sebastian and his fiancée Gaelle (Marina Hand) are on their way home from Britain to Canada. Back home, it is easy to see the chasm that exists between father and son. These are two men who can sit in a room together and say absolutely nothing to each other for hours. When words are finally said, they are more likely to be words commonly heard in verbal spats than tender reminisces of earlier, sweeter memories. And yet kindhearted reminisces are what Remy deserves in his final days, and so Sebastian does his best to provide them for him, flying his father’s dearest friends out to spend his final days with him.

Viewers looking for deep conversations or reflections on the meaning of life may be disappointed with what comes next, for the banter that this reunited group engages in involves memories of years spent womanizing, of the good old days of travel and wine, and of the numerous political theories that they have subscribed to over the years. These topics create a context under which for a brief moment, the great elephant in the room can remain hidden. It’s exactly how I suspect characters like these would act in real life. That’s not to say that there aren’t moments during which Remy’s pain and confusion seep through the justifiable façade taking place. We see Remy ex-wife Louise (Dorothee Berryman) verbally berate Remy for his past infidelity with such a great deal of emotion that one could easily conclude that those wounds are as fresh today as they were years earlier, and there are moments when Remy lies alone in his hospital room weeping. There are also a few fascinating conversations between Remy and a character of unexpected importance. But the expected conversation about the meaning of life, the one in which the parent imparts to his son wisdom that he hopes he in turn imparts to his son, never comes. It can’t. As Remy himself admits, he still hasn’t found a meaning to it all. How then can we expect him to explain it to his son? Even more tragic is Remy’s inability to speak to his daughter Sylviane (Isabelle Blaise) one last time.

The Barbarian Invasions goes against much of what conventional cinema or television have told us someone’s last hours of life are like. I’m used to films in which a man’s dying words are of the utmost importance, of scenes in which a character’s moment of death comes after a long awaited reconciliation or important announcement. Here, when father and son embrace for the last time, they do so with barely any words spoken between them. They both know what the other would say, and therefore the words are unnecessary. The moment was perfect.

As I write this, I find myself thinking about key moments from The Barbarian Invasions in my head, as if there is wisdom in them that I missed the first time. Perhaps repeat viewing will show this to be true. To say that the message of the film is that life is precious would be to simplify the film unjustly, but that may be the only cliché that fits the film. Remy has certainly enjoyed his life, and he remains unapologetic for the damage and separation that his womanizing ways and intellectual arrogance have caused his family. But perhaps he has earned that.

The Barbarian Invasions works on so many levels that when the film is over, it takes you a moment to take it all in. But that moment is important, for in that moment, we experience what each of the film’s characters at some point has realized, that life is impermanent, that there’s not enough time to wrap up everything before we go, and that the best way to go out may be with a laugh and a simple thank you. (on DVD)

*The Barbarian Invasions is in French and English with English subtitles.
Posted by Azrael Bigler at 9:45 AM