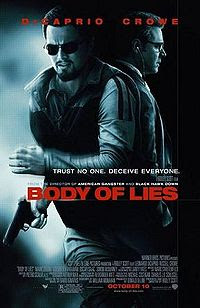 Body of Lies (U.S., 2008) – Towards the beginning of Ridley Scott’s Body of Lies, CIA agent Roger Ferris (played by Leonardo DiCaprio) and his civilian partner Nizar (Mehdi Nebbou) take on a group of suspected terrorists. The odds are against them, something like 5 to 2, and one of the terrorists is holding a detonator. A moment later, two vans full of terrorists and automatic weapons are chasing Ferris and Nizar through the desert. Machine gun fire rains everywhere, as U.S. helicopters speed toward them hoping to reach them in time. Long-established cinematic formulas call for the star to live through this harrowing experience and for his partner to not make it out alive, thereby establishing the lead character’s sense of loss, disillusionment, and willingness to rebel. And that’s exactly what happens. The formula then calls for Ferris to be called back into service quickly, perhaps as a way of getting him back into the swing of things or of helping him putting the past behind him. Therefore, Ferris is soon running around Jordan trying to stop a newly-formed terrorist group from launching a series of massive attacks in European countries and American cities. Ferris, again adhering to the formula, does things his own way and openly defies his superior Ed Hoffman (Russell Crowe), a man who frequently switches from serious conversations about national security to much friendlier, more light-hearted ones with his wife and daughter. This probably sounded good on paper, but on film, it doesn’t quite ring true, especially considering how seriously he takes his job.

Body of Lies is like a rehash of things we already know. For example, Body of Lies tells us that torture is wrong, an observation also made in Rendition. We also see that working with foreign governments can produce desired results. No surprise there. The film also suggests that what pushes some people to become terrorists is an inability to establish themselves financially. The President of the Philippines said this same thing several years ago. And last but not least, the film demonstrates the extreme stupidity of getting involved with someone, especially someone local, when you are working on a dangerous assignment, an observation that would seem like common sense. However, that doesn’t stop Ferris from initiating a “friendship” with a young Jordanian nurse. Add to all of these standard film elements a pace that never quite allows the film to achieve the expected and necessary level of suspense for a film of this kind, and what you have is a film that is ultimately pretty uneventful, awfully predictable, and even – dare I say it – boring. (on DVD)