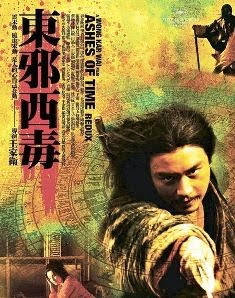 The root of man’s problems is memory. If there were no memory, no past, every day would be a new beginning. These are the thoughts of Huang Yaoshi (Tony Leung Ka Fai), a wandering swordsman who once a year visits his old friend Ouyang Feng (Leslie Cheung) in a desert mountain region somewhere in China. On this particular visit, he brings his friend a bottle of wine, a gift from a woman in the village he has just arrived from. The wine is said to be magical, causing whoever drinks it to gradually begin to forget the past. Huang seems likable enough, but his association with Ouyang and the speed with which he reaches for the wine hint at a life full of regret.

Whether the wine is truly magical or not is inconsequential. What seems significant however is the fact that Huang proceeds to visit people he wronged in the past. He does not apologize for the things he did while he is there; rather, he seems to be trying to understand the consequence of his actions and to possibly begin to lead a better life. It’s a noble pursuit, but noble pursuits rarely mix well with alcohol, and soon Huang, drunk and flirtatious, is offering to marry the sister of a rather feminine-looking man named Murong Yang (Bridget Lin), who claims to be son of the Murong Clan. When Huang doesn’t keep that promise, the man asks Ouyang to arrange for Huang to be killed in as painful a way as possible.

In most movies, such a set-up would lead to a violent and bloody confrontation. However, Wang Kar-Wai’s Ashes of Time Redux, a remastered and slightly-altered version of his 1994 film Ashes of Time, does not follow conventional formulas. Therefore, instead of acting on Yang’s request, Ouyang examines the motives of his visitor, especially after the arrival of the man’s sister Murong Yin, a woman whose resemblance to her brother is uncanny. Yin offers to double her brother’s fee if Ouyang spares Huang and kills her brother instead. A bit intrigued, Ouyang asks questions and studies the answers he receives. In Yang and Yin, he sees the possible affects of unrequited love: shatter dreams, infatuation, impulses of revenge, and possible mental illness. And then just as mysteriously as they came into his life, they are gone. It’s doubtful that Huang ever learns of the effect he has had on them.

There are other visitors - a poor woman whose brother was killed by thugs, a semi-blind swordsman waiting for the arrival of a group of bandits, and a barefoot swordsman trying to make a name for himself. Each of them will enter Ouyang’s life for a brief period of time, bringing with them emotional stories of loss and death, and, on occasion, requests for revenge. To each of these visitors, Ouyang remains emotionally detached, explaining that he is just a middle man responsible for ensuring that his clients receive payment for services rendered. His visitors’ plights are not his, and therefore, he sees no reason to personalize them. Eventually each one of them will leave, allowing him to return to his life of solitude unchanged. If only life and love were that simple.

I’m of two minds about Ashes of Time Redux. On the one hand, I found each of the characters, in particular, Ouyang, the woman he loves (Maggie Cheung), and Huang, fascinating, and I found myself anxious to see what fate would eventually befall each of them. It also doesn’t hurt that each of the scenes takes place in a stunning locale surrounded by breathtaking scenery. On the other hand, the film is at times hard to understand, and while each of the characters is interesting, I’m not sure all of them move the story along well enough to justify their inclusion in the film. I suppose one could argue that each characters affects Ouyang in a different way, and that his later actions are the result of the cumulative affect that these characters had on him, but I suspect this viewpoint would be hard to prove, as Ouyang appears to be wrestling with his past throughout the film and not just as a result of each of his visitors.

I suppose that there is a grander message to Ashes of Time Redux somewhere, something about the need to atone for one’s previous actions or how people can be haunted and change by the mistakes they have made. These are universal themes that never fail to resonate with audiences, and so when they are alluded to toward the end of the film, they do create the sense that this was what the film had been leading up to all along. I admit that during a pivotal conversation in the film I experience one of those “Ah ha!” moments, as if everything in the film now made sense, yet at the same time I couldn’t shake the feeling that it simply wasn’t enough, that something was still lacking in the film.

Ashes of Time Redux is based on Louis Cha’s four-part “The Eagle Shooting Heroes,” which has been described as the Chinese “Lord of the Rings.” If this series is in fact similar in style and ambition to Tokien's trilogy, then it’s easy to see why some viewers may not be completely satisfied with Wang's adaptation of it. At just ninety-four minutes long, it just doesn’t have the running-time needed to adequately convey the complexities and intricacies of such a series or to fully connect or conclude each of its storylines. Therefore, Ashes of Time Redux never becomes the universal masterpiece it so yearns to be. It remains a somewhat fascinating, but slightly elusive film that could have been so much more. (on DVD)

*Ashes of Time Redux is in Cantonese with English subtitles.

*For a second opinion, please check out Jamie S. Rich’s review at http://www.dvdtalk.com/reviews/35157/ashes-of-time-redux/
Posted by Azrael Bigler at 3:37 AM