Capsule Reviews – Battle for the Planet of the Apes 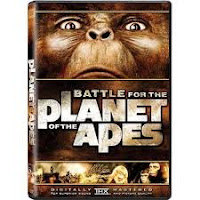 Battle for the Planet of the Apes will likely be remembered as one of the more disappointing series finales in film history. This is a film that seems to be trying too hard to offer hope when it should be trying to bring the series back to the world we first saw in the original Planet of the Apes. The film is essentially a history lesson told to a group of children in the year 2670. Through the story, we see a not-so epic battle that took place more than six hundred years earlier between man and ape, as well as a power struggle between chimpanzees and gorillas. The film takes places a few years after the supposedly great nuclear apocalypse that wiped out much of the population. In this time, Caesar (again played by Roddy McDowall) has achieved an almost mythical status among his people. He is both a benevolent ruler and a dictator denying equal rights to humans. In one of his sillier decrees, Caesar has banned the word no because of the negative connotation it has for apes. Is that even possible? In addition, he is still trying to figure out how humans and apes can co-exist as equals. Perhaps a small skirmish between humans and apes is what is needed to help him clarify things.

Caesar’s leadership is being challenged by General Aldo (Claude Akins), a gorilla who wants to seize power and fight against both the humans and Caesar. Is this the Aldo we heard so much about in the third film? Maybe not, for nothing he does could be described as revolutionary or beneficial to all apes. The battle itself, fought by men who arrive in cars that barely work and an old beat-up school bus, is extremely clunky, and a few shots are used several times due to budget constraints. Nor does the battle that takes place resolve any of the series’ outstanding questions. Just how did humans lose the ability to speak? When did they revert back to a more animalistic state, one in which they are ruled by their instincts rather than their minds? Are we meant to believe that the events in the fifth film have prevented the events in the first? The first film resolved nothing. The world was still a mess, and it was hard to see where hope would come from in the future. The fifth one also resolves very little, yet there is a difference. While the first one left viewers shocked and amazed, the last one will probably leave them sighing with disappointment, wondering how a series that had so much promise ultimately amounted to so little. (on DVD)

unbelievable! you saw so much king-kong movies.