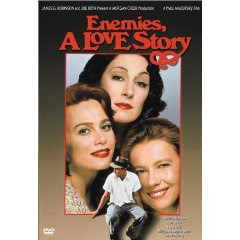 I suppose it’s in our nature to want to prove ourselves, to almost look forward to that moment when we have the opportunity to stare danger – and possibly death itself – in the face and demonstrate to the world how deeply our bravery runs. Most of us do not get such a moment. Oh, there are indeed smaller moments, instances when we might help someone who is lost or stand up for someone who is being insulted, but these are nothing compared to times when one’s very life could be lost if we act, when we are saying with our actions, “I am willing to die for what is right.” And how should one react if such a moment does appear before us and we falter? Can we so easily put it behind us and move on?

Paul Mazusky’s powerful and well-acted 1989 film Enemies, A Love Story is about Herman Broder (the late Ron Silver) a man whom fate decided to put in such a circumstance. However, instead of acting the way countless numbers of people – including himself, I imagine - have told themselves they would, Herman froze up, and someone he loved suffered. He shouldn’t be blamed, though, for to have spoken up and revealed his location would surely have meant death to himself and most likely the person he would have been trying to defend. Such sympathies, however, are little consolation to a man whose wife was beaten and captured by Nazis in front of him.

Enemies, A Love Story begins on Coney Island in 1949. Herman is married to a young Polish woman named Yadwiga (Malgorzata Zajackowska), whom we later learn was responsible for shielding Herman from the Nazis. It is a fact that he has kept hidden from his associates. Yadwiga spends her days cleaning the house and trying to make her husband happy. She seems nice enough, but despite her obvious love for Herman, she cannot make him happy. It’s not her fault really; she simply can’t make him feel needed. And Masha (Lena Olin) can. Perhaps it is her emotional instability, the way she can be calm one moment and irrational the next, that appeals to him. Perhaps it is the way they feel free to discuss topics that they would never dare to discuss with their spouses, namely their traumatic experiences during the war. Perhaps it is because, as one character points out later, Masha screams the loudest and is the least rationale. Whatever the reason, Herman is in love with her, and it is the worst thing for him.

Enemies, A Love Story is a challenging film, for none of the central characters are truly villains. Herman may hurt people, yet it is only because he is hurting so much himself. Masha may verbally put down Yadwiga and manipulate Herman emotionally, but it is hard to hate a character as lost as she is. As for Yadwiga, she remains sweet, partly because she wants to believe that the years she has spent with Herman, as well as the sacrifices she has made on his behalf, have not been in vain. As the film progresses, Herman is torn between doing what is responsible and doing what he thinks he will make him happy, between living in the open and living in the shadows. As if to make things harder to him, a ghost from the past returns, but prefers to stay dead, and the possibility of parenthood arises, not once but twice. Each of these events offers Herman a chance at a new beginning, yet they are also opportunities that he is not sure what to do with. How can he be when his first instinct is to flee?

Enemies, A Love Story is not an easy film to watch and it does not have the happy ending audience members are probably desperately hoping for. Yet to have an ending in which Herman discovers he has loved the right woman all along, casts aside his nightmares, and becomes the responsible husband and father we all hope he will be would be utterly unrealistic. They are not characters that can simply forget what they have seen or done, and by not having them do so, the film reminds us that life is not always pleasant, that the fairy tale we expect romances to present us with in the end is not always possible. In reality, some people don’t forgive and forget. Sometimes they just keep running. (on DVD)