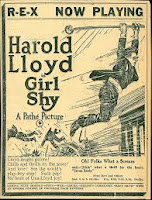 I suppose one of the tricks to thoroughly buying into slapstick is to put aside our normal empathy for those characters unlucky enough to have borne the brunt of it. Being able to do so, this line of thinking goes, enables us to laugh when someone arguing with the Three Stooges is poked in the eye, rejoice when the Marx Brothers make a perfect stranger’s life an utter nightmare, and excuse someone for running an innocent bystander over as he darts to an important destination. In real life, we would likely be horrified by such behavior, and I suspect that if a movie contains too many examples of such boorish behavior, we begin to have mixed feeling about what we are watching. Perhaps this is why as Harold Lloyd’s Girl Shy reached its frenetic conclusion, I began to feel uneasy about all of the people he was affecting in pursuit of the woman he loved. Sure, I admired his tenacity, but did he have to leave so much carnage in his wake?

In Fred Newmeyer’s Girl Shy, Lloyd plays Harold Meadows, a tailor’s apprentice who has a made a habit of studying women. An early intertitle add this caveat: the more he does so them, the more he fears them. Fear is probably the wrong word here, for Harold’s problem is not that he believes himself to be in imminent danger, but that when he is in the presence of a lady he freezes up completely, becoming tongue-tied and breaking into an intense stutter, the treatment for which, humorously, is the sound of a whistle blowing. In one scene, Harold is asked to sew a woman’s stockings – while she is still wearing them, of course – and the initial result is shock, sweat, and a pricked leg.

Meadows is also an aspiring author, yet his choice of a topic is a curious one. His manuscript is entitled The Secret of Making Love, and in the forward to the book, he brags of having a wealth of experience. The movie shows of two such “experiences”: the first, with a vampire; the second, with a “Flapper,” which according to Wikipedia refers to “young Western women who wore short skirts, bobbed their hair, listened to jazz, and flaunted their disdain for what was then considered acceptable behavior,” such as smoking. In each, Meadows uses different techniques to win their affection, and then, having done so, simply notes the accomplishment on a piece of paper. There is no evidence that he is claiming to have done anything else. The scene with the Flapper is certainly not PC and produced a somewhat negative reaction in me as I watched it, but it helped to remember that these were the words and ideas of a naïve young man who has likely never been in a relationship; they display his ignorance of the opposite sex and reflect notions that were not all that uncommon at the time.

There are a few treats in these early moments of the film. One of them is the delight in watching Lloyd’s character become overwhelmed by some live music and begin moving his feet to it even though he is far removed from the party. It made me recall Henry Fonda in My Darling Clementine. Also, Lloyd’s mannerisms around several female characters adequately establish his awkwardness and hopelessness around women in general, which makes the contents of the book all the more hilarious. Soon, Harold meets a rich young woman named Mary Buckingham (Jobyna Ralston). The interesting thing about her is that she finds Harold’s subject matter both promising and hilarious, and her reaction works wonders on him. From here, the only question is how they’ll get together.

Other elements of the film stand out. There’s a beautiful scene on a narrow river that makes excellent use of reflections and physical space. There’s also the cute way that Harold and Mary each walk around with an object that reminds them of the other and some great comic bits involving nature’s attempts to spoil their romantic moment which will remind some viewers of O.J. Simpson’s first scene in The Naked Gun. The scene is one of the most authentically romantic ones I’ve ever seen, and Lloyd and Ralston have amazing chemistry onscreen.

And pretty soon after that we’re off to the races. Why? Because in practically every slapstick comedy, the protagonist must do something extraordinary as a finale – be it Keaton showing his athletic prowess at the end of College, Chaplin fighting off city officials trying to take “the kid” away, or W.C. Field’s galloping to the rescue in his trusty Ford in Sally of the Sawdust, a gag that may have been inspired by a similar one in this film. Here, as in many other films, it is love that ignites the journey, and what an exciting, jaw-dropping, exhausting journey it turns out to be!

When I watched Girl Shy, it was the end of a long, somewhat punishing day, so much so that the notion of simply going to sleep would not have been a bad one. At times like these, watching a film can resemble an unpleasant chore. Thankfully, this was not the case with this film. Girl Shy perked me up, brought a smile to my face, and calmed my flailed nerves. It also gave me something to look forward to – six more films with this remarkable comic duo.

*Girl Shy appears to be out of print on DVD. It is available on YouTube.
Posted by Azrael Bigler at 9:00 PM