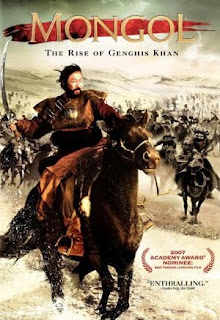 Every culture has its legends, its mythical figures that changed their people for the better and perhaps even altered the course of human history. What seems to be nearly universal in legends is that the characters that will later be known throughout the world have a sense of their own importance, even if they can’t quite put this awareness into words. I suspect that this attribute is more often than not the creation of overly protective writers trying to generate the perception that destiny or divine intervention had a hand in the transformative, often chaotic events that occur during the times in which legends rise. Regardless of whether one personally believes in destiny or not, a character that feels in his gut that he is meant for something important – even if he can’t explain why - can be fascinating to watch.

Sergei Bodrov’s 2007 film Mongol tells the story of one such man. That man is Temudjin, the man who will later become known the world over as Genghis Kahn. The film begins in a dingy rain-soaked stone city. There, Temudjin sits imprisoned in a cell conveniently placed so that he can be gawked at by disrespectful, jeering passersby. He does not speak, but his eyes betray his desire for revenge. The film then takes us back to Temudjin’s younger years, to the time when he and his father, the reigning khan, were on their way to select Temudjin’s wife. It is an event that Temudjin accepts, despite the fact that at nine years old he is being forced to choose a wife that is Merkit because of the actions of his father years earlier. From the look on his face, Temudjin seems to have been well schooled in the necessity for diplomacy. Circumstances change, though, and soon Temudjin announces his intention to marry a bold young Onggirat girl named Börte, a decision that momentarily stuns his father but pleases Börte immensely, which it should since she’s the one who first suggests the match. The engagement is made official, and Temudjin promises to return in five years.

The years until their rendezvous are tumultuous ones. Temudjin will lose his father and see his father‘s clan come apart at the seams. Soon, he will be forced to flee for his life after Tagutai, who had been loyal to Temudjin’s father, takes control of the clan and makes it clear that he intends to kill Temudjin when he comes of age. Later, Temudjin will meet and becomes close friends with a young boy named Jamukha, who years later will be both his closest friend and one of his deadliest enemies simultaneously. It is Jamukha who will go against clan protocol and help Temudjin save the one he loves, yet it is also he who may also be responsible for Temudjin never seeing her again. And it is not just Jamukha and Tagutai that Temudjin has to worry about, for it seems at times that everyone is conspiring against him. Later, both an official of the Tangut Kingdom and a group of Merkit warriors seeking to punish Temudjin for the sins of his father play their parts in testing Temudjin’s honor and perseverance. It’s a good thing then that Temudjin’s most ardent supporter appears to be Tengri, the Mongolian’s supreme god.

Most film adaptations of legends include the obligatory scene in which the man destined for greatness stands in front of his troops, be they military personnel, samurai, or revolutionaries, and delivers a speech that stirs patriotism in the men and inspires them to give all they have during the coming fight. Mongol does not include one of these scenes. Instead, it depicts a unit of soldiers who are already well aware of the dangers they are facing on the battlefield and have already decided that what they are fighting for is indeed worth the sacrifices that will undoubtedly come once the fighting commences. All that is needed is to be told to begin. I was reminded a bit of Kirk Douglas’ march from his bunker to the top of the trenches in Stanley Kubrick’s Paths of Glory. I remember seeing the scene and remarking to myself that Col. Dax’s silence and body language said more to his troops than any words of encouragement could have. I felt the same way about Temudjin. The difference is that Temudjin seems well aware of his impending victory, and he accepts that many of his men will die to achieve it. In a moment that filled me with a multitude of mixed emotions, some of Temudjin’s bravest and most skillful soldiers lead the first wave of Jamukha’s soldiers into a trap and are then shot down with them. Temudjin does not show a single ounce of emotion for their loss. Is that the sign of a great leader or an immoral man willing to win at any cost?

This is much that makes Mongol worthy of praise, from the beautiful locations the film was shot in to the film’s superb structure, which will keep even the most knowledgeable of historians enthralled. In addition, each of the film’s lead actors gives an accomplished performance. As Temudjin, Tadanobu Asano delivers a performance that makes you understand how Temudjin can be seen as both a loving husband and father and an inspiring leader. Khulan Chuluun plays Börte as a devoted, strong-willed woman who has a sense of Temudjin’s importance in history. When she sees him for the first time after their long separation, her immediate reaction is to proclaim that she must be by his side. Khulan Chuluun delivers the line perfectly, and in the process of doing so conveys the idea that Börte has no reservations about a life with Temudjin, despite the peril she could face as a result of being married to him. However, I reserve my highest praise for Honglei Sun, who plays Jamukha as an adult. Given the film’s most complicated role, Honglei excels with it, first establishing the bond that exists between him and Temudjin and then slowly, reluctantly tearing it down, all the while never allowing anything resembling regret to be visible to the audience. It’s one of the best performances I’ve seen this year.

There are going to be people who complain about the way Temudjin is portrayed in Mongol, saying that he was not this gentle or loving and that the film distorts history for the sake of propping up an icon. Not being an expert in this part of history, I cannot say if they have a point or not. However, it seems to me that the movie is not about Genghis Kahn or the actions that have led some to refer to him as a barbarian; rather, the film is about who Genghis Kahn was before he acquired this moniker, and it is the movie’s point of view that at this time in his life he was a decent, principled, and fair man who responded to violence but did not instigate it. In one of the film’s most poignant moments, he leaves himself vulnerable by sending some of his troops to guard his and his men’s families. The movie suggests it was common for soldiers to do the opposite, to abandon their families in an effort to preserve the army. However, in the film, Temudjin refused to do so and in fact, pays a steep price for his humanity. Is this scene accurate? Was he really this different from other leaders? Who knows? All I can say for sure is that it’s great drama, and this time at least, that was more than enough for me. (on DVD)

*Mongol is in Mongolian and Mandarin with English subtitles.
*Mongol was nominated for Best Foreign Language Film at the 2008 Academy Awards.
Posted by Azrael Bigler at 10:39 AM

When I studied in the university, I hadn’t seen the movies of historical subject. Being well-schooled in historical identification, I would definitely try to point out what was wrong in these movies. That made seeing movies become no fun. However, after graduated, I begin to accept different viewpoints about history in movie performances, for example, The Other Boleyn Girl. I will see Mongol in my leisure time.