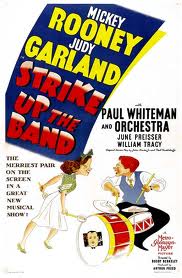 Strike Up the Band (1940)
Reviewed by Paul Cogley

Mickey Rooney and Judy Garland became close friends during their early adolescence on the MGM lots of the 1930s, a friendship that remained platonic and lasted for all of Judy’s too-short life. When she died of a drug overdose in 1968, Mickey was asked to deliver the eulogy. He couldn’t do it, he said, because he knew it would be impossible to get through it without breaking down in grief.

At the time Strike Up the Band (1940) was filmed, Mickey was 19 and Judy was almost 18. They were youthful, barely-adults then, multi-talented, and undeniably huge stars. The year before, The Wizard of Oz (1939) had shot Judy to stardom while Mickey had grown to become the number one box office attraction.

Strike Up the Band was the second in a series of movies Mickey and Judy made at MGM with producer Alfred Freed that became known as the Backyard Musicals.  Their storylines inevitably led to the young stars joining with other young friends to “put on a show,” one that could be done on their own terms unadulterated by stodgy grownups.

In Strike Up the Band, their amateur show is an elaborate parody of the type of melodrama popular on the stage in the 1890s.  I suppose this might be similar to a group of teenagers in 2012 putting on a show parodying movies from the1960s or 1970s.  However, it’s interesting to think that looking 40 years back from the perspective of 1940 was to return to a world thoroughly unlike the modern world of MGM musicals: Telephones, autos, movies, radio, and electric lights were rare or unheard of.  Indeed, in Strike Up the Band, when one of Mickey and Judy’s schoolmates needs medical attention, he’s put on a plane to Chicago; that’s how much things had changed since Grandpa’s day.

One thing that the producers of this movie couldn’t have known was that they were making a musical film during the short golden age when Big Band Jazz was vibrantly at its peak. Amazing as it may seem to us today, jazz was once the most popular form of music, enjoyed by teenagers across America in this pre-war era.

The type of music showcased in Strike Up the Band had swept the nation. Today this musical form is considered untouchably classic; big band jazz circa 1940 is studied in music graduate programs worldwide as an important American art form.  Add to it the power of Judy Garland’s voice and the result is a movie soundtrack in Strike Up the Band that music lovers will never get tired of.

Another active ingredient for this movie was its direction by Busby Berkeley.  The choreography is top-notch entertainment. The highlight in this film is the performances and camera work of an amazing high school dance. Of special note, the Conga line dance scene within the dance is fun and truly brilliant.

Last, but certainly not least, is the brilliant, energetic Mickey Rooney. In 2007, Mickey taped a warm movie introduction that is included in the DVD package currently available for this movie. Rooney mentions his appreciation that Strike Up the Band allowed him to showcase “my passion for the drums.”

Now, it’s true that he plays drums in several scenes in his role as a bandleader in Strike Up the Band. And, indeed, Mickey does show a talent for the drums. However, in his 2007 introduction Rooney could just as well have said that Strike Up the Band allowed him to display his passions for dramatic acting, verbal comedy, slapstick, tap dance, piano, singing—all of which he does in this movie.  The movie overflows with Mickey Rooney’s infectious spirit, and he is brilliant throughout.