Review – City of Life and Death 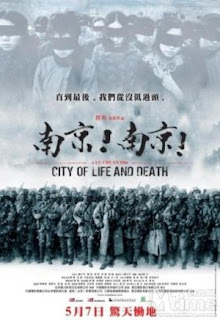 It’s doubtful that there will ever be complete agreement concerning the 1937 invasion of Nanking. Just look at how many divergent opinions exist today concerning what led up to the American Civil War, and that ended over a hundred and fifty years ago. No one disputes that in 1937 there was an invasion, and no one disputes that people died. That’s what happens during armed conflicts. It’s what happened immediately after the invasion that to this day remains a source of such anger that it continues to have enormous political and social ramifications for the people of China, Japan, and Taiwan.

Chuan Lu’s City of Life and Death (also known as Nanjing! Nanjing!) is the Chinese account of the invasion of Nanking, an event that has since come to be known as the Rape of Nanking, partly due to Iris Chang’s powerful book of the same name. It is not a film for the faint of heart or the squeamish. One scene in particular demonstrates this very well. In the scene, a Japanese soldier walks slowly through the battered streets of Nanking. He passes people tied to poles awaiting execution, Japanese soldiers looting homes of anything of value, a group of young women being led away in chains, the naked and bruised body of a young Chinese woman, and men on their knees shot in the back of the head execution-style. Later, we’ll see vast landscapes filled with the bodies of Chinese soldiers, most of them shot after they had surrendered or been disarmed. Throughout the film, there are also constant reminders of the dangers that war and military occupation pose to women.

City of Life and Death, unlike Steven Spielberg’s film Schindler’s List, does not have a central character. Instead, events are revealed to us through several different points of view. The first character is a young Japanese soldier named Kadokawa (Hideo Nakaizumi). He watches the atrocities that are occurring around him in horror yet is powerless to do anything to stop them. We also meet the leader of what remains of the Chinese army in Nanjing, Lu Jianxiong (Ye Liu). He keeps fighting long after his superiors, as well as most of his fellow soldiers, have retreated. Later, we meet John Rabe (John Paisley) and a group of brave men and women who try their utmost to protect refugees in a “safety zone.” Together, they undertake this impossible task without any military assistance or weaponry. They hope that their status as outsiders and the fact that Rabe is a German – and therefore a friend to Japan – will ensure that the Japanese troops stay away. They are only partially correct. Late-night invasions and rapes are commonplace, and Japanese soldiers seem intent on finding new ways to lure women outside the protective barriers of the security zone. In one particularly emotional scene, Rabe must ask for one hundred female “volunteers” to service Japanese soldiers for a short period of time. If one hundred do not volunteer, he’s been told, none of them will be safe. Few of these “volunteers” ever return.

Because City of Life and Death is told from so many perspectives, we don’t get to know its characters as well as we’d like to. In fact, three members of Rabe’s team are hardly in the film at all, and Rabe himself only makes a few appearances. More screen time is given to Rabe’s assistant, Mr. Tang (Wei Fan), Tang’s wife (Lan Qin), and Miss Jiang (Yuanyuan Gao). Each of these characters has moments of true heroism. Mr. Tang, in particular, makes a surprising statement of defiance that is simply unforgettable.

City of Life and Death is also noteworthy for its even-handed portrayal of Japanese soldiers. True, many are violent and immoral. However, many of them are also emotionally naïve. (I won’t say brainwashed because to do so would exonerate many of them from their actions.) The film reminds us just how young many of the soldiers that fought in Nanjing were. At a time when they are being asked to serve their country, a duty that includes killing for it, many are just eighteen and have not yet experienced life. In the film, we see soldiers whose hands shake as they hold weapons, who are petrified of their enemy even when they are unarmed or surrendering. It is during one of these moments that Kadokawa makes a mistake that will change his life forever. On the Chinese side, we see children in uniform on the battlefield. In a perfect world, they would be at school or playing with friends at the nearby park. Later, in a rather sweet moment, Kadokawa goes to see one of the newly-arrived Japanese comfort women. He is nervous and inexperienced, and she is charming and understanding, especially after Kadokawa’s excitement gets the best of him. An older person would likely recognize her behavior as part of the job description, but to Kadokawa, it is the mark of an angel, and to a fellow soldier, he announces his desire to one day marry her. Imagine his disappointment then when he goes to see her again and she does not recognize him in the slightest.

City of Life and Death is shot in black and white, giving it the look of archival footage in a documentary. In addition, postcards and letters are used to convey both the passage of time and the sense that things are getting worse. These techniques work well enough, but I admit to not being able to decipher the handwriting used a few times. Another problem with the film has to do with the fact that two critical characters look alike. This has the potential to cause unnecessary confusion during some crucial moments in the film. However, neither of these problems diminishes the film’s power. Much of the credit for this is due to the ensemble cast, in particular Nakaizumi, Fan, and Gao.

Towards the end of City of Life and Death, a group of Japanese soldiers perform a traditional dance through a short, severely battered section of Nanking. The dance is to celebrate their military victory. It’s an odd moment, for we know what little cause for celebration there will be later. And what is it exactly that they are celebrating? the annihilation of most of the male population? the raping of possibly tens of thousands of women? the loss of their own humanity? the very fact that they're still alive? In fact, with the possible exception of a few of Kadokawa’s actions, there have been few acts of true heroism on their part. The same cannot be said about their adversaries or about those that tried to protect them. In short, City of Life and Death is about a moment in history when the bad guys won. It’s not easy to watch, yet like Schindler’s List, The Pianist, and Paths of Glory, it’s important that we do. (on DVD in Region 3; currently unavailable in Region 1)

*City of Life and Death is in Mandarine Chinese and Japanese with English subtitles.
Posted by Azrael Bigler at 10:27 AM