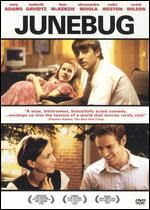 Phil Morrison’s excellent film Junebug is one of those rare films that exists completely in the now. What I mean by that is that at every moment when one might reasonably expect the film to cut to a flashback or give its characters a moment to discuss events from the past, it doesn’t. We simply see the results of what seems to have been some rather tough years – a family that doesn’t communicate as well as they should, a very controlling mother who is also a bit too quick to cast judgment on others, a father who is as kind-hearted as he is reticent, a down-on-his-luck son who seems frustrated at the world, and his chipper wife, an overly inquisitive and spunky young woman who is due to give birth any day now. I kept expecting a revealing, heart-to-heart conversation – the kind that daytime talk shows and reality TV are so famous for, but none developed. The closest thing to it occurs when we see a picture of the son and his wife when they were in high school. In it, she beams with joy, as if certain that she has found her soul mate. His expression reveals neither certainty nor contentment. She will later say they were very happy at the time the picture was taken. Is that the truth? The film does not expressly answer that or many other pertinent questions. And to be honest, the film is stronger for it.

Junebug begins at an auction in Chicago. There, an auction rep named Madeline (Embeth Davidtz) locks eyes with a well dressed potential buyer (Allessandro Nivola) across the room. A week later, they are married. Six months later, Madeline is sent to North Carolina to visit and sign an undiscovered artist named David Wark (Frank Hoyt Taylor). It just so happens that Madeline’s husband’s family lives in that general area, so she and her husband George decide to visit her new in-laws. It’s her idea, and we see very little to suggest that George is particularly happy to be back. In fact, for most of the movie, he is conveniently absent. The visit opens up old wounds and perhaps creates new ones. Madeline’s tactile openness clashes with the family’s inhibited nature, and simple gestures of kindness are misinterpreted as suspicious acts. At one point, Peg Johnsten (Celia Weston), the matriarch of the family, refers to Madeline as a stranger; her husband Eugene (Scott Wilson) politely points out that Madeline is in fact family, but the damage is done, for a moment later we see Madeline standing close enough to them to easily have heard their conversation.

Despite Davidtz’s best efforts, it is Amy Adams as Ashley Johnsten that steals the film. As Ashley, she counters the rest of the family’s silence with repeated attempts at conversation; when everyone else seems worried or tense, she is bubbling with energy and optimism. It’s easy to see why she and Madeline get along so well and why she appears to be George’s favorite member of the family – besides his wife of course. It’s also interesting to see how much Madeline and George find out about each other during this visit and how much closer they are by the end of it. Junebug does not pretend that problems that took years to create can be fixed easily, and in truth, little has been solved by the time the film ends. However, perhaps this short visit has started them on their way towards eventual reconciliation. I’m certain Ashley would see it that way. (on DVD)