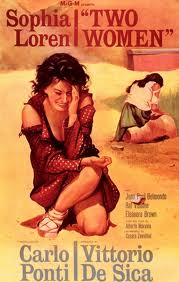 Vittorio De Sica’s moving film Two Women takes place in a country that has grown tired of war, so much so in fact that some of the characters we meet barely care who wins anymore. To be fair, they have more immediate concerns, namely surviving until that fateful day when peace is restored. They lives are filled with seemingly daily air raids, clean ups, deaths, and treks for food. It is a situation that has turned the tables on the long established social order, putting power into the hands of the farmers and the poor and making the rich practically beggars. At one point, an older man implores the film’s heroine not to buy food from him, explaining that it would only lead to hard feelings – at his price, she would get mad at him, and at her price, he would get mad at her. She makes the purchase anyway. Really, what choice did she have?

Two Women is primarily about a tough-as-nails widow named Cisera (Sophia Loren) trying to protect her thirteen-year-old daughter Rosetta (Eleonora Brown) in the final months of Italy’s involvement in the Second World War. After an Allied bombing comes too close for comfort and causes Cisera’s daughter to collapse, Cisera decides to pack her things and take her daughter to the countryside until the war is over. She is not the only one with this idea. Not every thing runs smoothly, of course. The train they take is forced to stop due to extensive damage to the track, and instead of waiting on the hot, crowded train for five hours while the track is repaired, Cisera and her daughter elect to walk the rest of the way. It’s a seemingly simple, pragmatic decision, yet it demonstrates very clearly Cisera’s decisiveness and independence.

At other, perhaps better times, a gallant passenger would have offered to escort them. In this film, however, such a proposal would probably have been viewed with suspicion. In fact, throughout the film, we are frequently reminded of the danger that exists for women - from falling bombs and a long-time friend’s ill-timed advances to lecherous passengers and German soldiers who hardly even attempt to mask their true illicit intentions. As later events all too painfully demonstrate, society’s moral compass has almost completely collapsed, for even liberators can be villains.

Like other De Sica films, Two Women is a collection of moving and fascinating conversations interspersed with moments of startling drama. One of the most interesting of these conversations occurs right after Cisera and Rosetta arrive in her village. In the scene, members of her upper class community, still dressed up in their Sunday best as if their world had not changed at all, discuss their hopes for a speedy end to the conflict. They all seem in agreement that it doesn’t matter which side wins, for all they want is a return to normalcy. It is an understandable sentiment. However, only a young man named Michele (Jean-Paul Belmondo) has the guts to remind them that it was they who had cheered the start of the war and they who proudly displayed their support for Mussolini on their clothing. It is rather ironic that these same characters later cheer advancing American troops as they edge their way closer to the Italian city of Rome. Michele also points out that his rich friends and family are stuffing their faces with wine, cheese, and bread as their countrymen are dying in battle. Their response to his indignation is simply to shrug their shoulders and continue thinking that this is the way it is supposed to be. Even when life gets much harder for them later and they have to search the fields for food, they continue to maintain their belief that they are the privileged class and that others should accommodate them. One of them even has the tenacity to suggest that the poor choose to live in squalid conditions.

Scenes like these are fascinating, and De Sica does not appear to be using them to make viewers dislike his characters. Instead, hearing their honest views helps us understand the times in which these characters lived and the way people like them really viewed the world. Even Cisera occasionally espouses views that would hardly be considered compassionate. However, when confronted with tragedy, characters are usually quick to respond in the right way.

Other scenes, however, are tough to watch. In one unforgettable scene, Cisera and Michele go out in search of food and come across a shell-shocked woman who tells them her experience with German soldiers that had the same need. The scene is absolutely heartbreaking, as is a later scene in which the fate of a pivotal character is revealed. Of course, a film wouldn’t be complete without some sort of love story, and De Sica does not disappoint. However, instead of giving us two war-weary people who find each other under the worst of circumstances, he gives us an awkward and unfulfilled courtship - a shy young man who falls for a slightly older woman, and a woman too focused on other things to know precisely how to react. When they do share an ill-advised moment of intimacy, it is hardly the kind that would inspire feelings of joy or hope.

Sophia Loren was just twenty-five when she made Two Women, and she was not De Sica’s first choice for the role. However, it is hard to imagine anyone else playing it. Throughout the film, Loren has the look and manner of someone much more experienced in life than her age would suggest. We sense her weariness of the war and the toll it has taken on her. Her every move - from the way she uses her hands when she talks to the way she watches carefully people looking at her - conveys her character’s conviction and quest to protect both her and her daughter. On occasions when Cisera’s protective shield is lowered briefly, Loren’s changes in emotion and facial expression clearly demonstrate how difficult and meaningful these moments are for her. It’s truly a great performance, and it garnered Loren an Academy Award for Best Actress in 1962.

Unfortunately, Two Women has not been preserved well, and most, if not all, of the releases of the film on DVD have included dubbed versions of the film. It is mindboggling that a subtitled version of the film is not available, especially considering the film’s status as an Oscar winner. However, those that are able to endure the dubbing, the scratches, and the blotches will see something unforgettable. Two Women deserves better than it has been given, but it remains something we should all see nonetheless. (on DVD)

*Two Women should be in Italian with yellow subtitles. It isn’t. Sigh.
Posted by Azrael Bigler at 9:00 PM