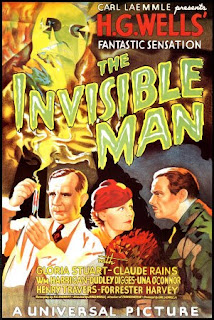 The notion of an invisible man is simultaneously ludicrous and terrifying. For example, imagine you were the head police detective in the small village of Iping in West Sussex, and you began receiving reports of an invisible man terrorizing the owners of a local inn. You would be forgiven for being skeptical at first, but later, when confronted with irrefutable evidence, you too would begin to realize the danger posed by such a person. He could rob banks with impunity, commit violent acts without leaving any evidence in behind, or listen in on conversations meant only for a select few. He could be anywhere. He could even be behind you, preparing to strangle you at this very moment. On the other hand, I wonder how soon you would be struck by this oddly humorous realization – there is an invisible naked man running around my village in the middle of winter. That can’t be comfortable.

James Whale’s 1933 film The Invisible Man acknowledges the strange predicament of the invisible man – that in order to be able to terrify others, he must be rather uncomfortably exposed to the elements. In the film, the invisible man requires blankets to stay warm when he is being driven somewhere and becomes increasingly testy when he must step out on a cold or snowy night. In addition, being invisible carries with it other inconveniences. When he eats, the food stays visible in him for one hour, so eating out is not an option. Moreover, rain and fog cause him to be partially visible, so he must be careful to only go out on clear nights. Even dirt or mud can destroy his sense of anonymity. It’s no wonder that he needs a partner to help him begin his reign of terror. Whale’s The Invisible Man, unlike Paul Verhoeven’s 2000 film Hollow Man, does not address the threat posed to woman by an invisible man, perhaps because acknowledging that would take the fun out of the movie. Having seen Hollow Man, I’d say Whale made the right decision.

The Invisible Man is Dr. Jack Griffin (Claude Rains), a scientist whose quest for greatness – apparently so that he would be worthy of a beautiful woman named Flora Cranley (Gloria Stuart) – caused him to secretly use himself as a test subject. The experiment went wrong, and Griffin simply disappeared, leaving Flora to worry constantly in his absence. And she indeed has ample reason to worry. Griffin’s colleague, Dr. Arthur Kemp (William Harrigan), comes across a list of chemicals in Griffin’s lab, and the last chemical gives Flora’s father, Dr. Cranley (Henry Travers), pause for concern. The chemical is a bleaching powder that turns whatever it touches white. That’s not terrible in itself. However, tests on animals revealed a shocking side effect to the chemical – madness. Somehow, they must find Griffin before the police do and try to help restore him to his previous visible self.

H.G. Wells’ The Invisible Man was first published in 1897, so it is highly unlikely that he meant it as social comment on the scientific and political movements of the 1930s. That said, it is hard not to see the film as a metaphor for the scientific theories of that decade. The race for military supremacy was ongoing, and eugenics was thought to offer great advantages to whichever nation figured out how to harness its potential. Which country wouldn’t have jumped at the opportunity to have an invisible army? Which leader would not have at least momentarily imagined all of the possibilities that such an army would bring him? Whale shows us what one invisible man is capable of – murder, bank heists, a deadly train derailment. Imagine what thousands would be able to do.

The Invisible Man works for several reasons. The first is that the film achieves an incredible amount of tension. Credit for this should be given to Claude Rains, who, despite being unseen for most of the film, is perfectly menacing as Griffin. All Rains has to do is speak for viewers to know the mayhem that Griffin is capable of. Rains is equally up to the challenge of quieter more sympathetic moments. Most of these involve his relationship with Flora and his desire to return to normalcy and to a life with her. I don’t blame him. Gloria Stewart looks stunning throughout the film, partly because Flora has the habit of wearing long, beautiful, silk nightgowns at home, even at midnight. The supporting cast is equally strong, and in a way, their job is hard than that of Rains, for they must make viewers believe that an invisible man is present and that they are indeed fearful of him. They do their job extraordinarily well. Finally, praise should be given to John P. Fulton, who is credited with creating the amazing special effects in the film. It is not just that they are good for a film from the 1930s; they are good for a film from any decade.

At a time when most science fiction-horror movies create scares by adding on manipulative musical scores and keeping a high, continually-increasing body count, it’s nice to see at a horror film that works for the right reason – because the situation it depicts is terrifying in itself. In truth, nothing else is really needed. (on DVD)