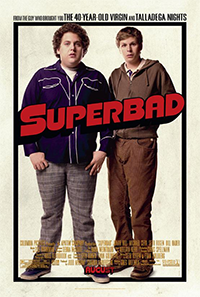 I believe I have found another film genre that just doesn’t work for me. This particular genre calls for a group of young men, possibly teenagers, to possess an unusual infatuation with either sex or losing their virginity. In the eighties, films like Porky’s, Revenge of the Nerds, Animal House, and Fast Times at Ridgemont High all capitalized on the sudden interest in this once taboo topic. Later, there were the American Pie films. To avoid negative labels, screenwriters attempted to make these films about something deeper – usually friendship or maturity. For example, Revenge of the Nerds tells viewers that people have more in common with the underdog than they would care to admit, in Fast Times at Ridgemont High, a sexually active teenage girl learns that sex does not bring happiness, and each of the American Pie films ends with a message of how strong the bond between males can be. However, I don’t remember any of these messages being part of the trailer.

One of the latest films in this genre is Judd Apatow’s Superbad. The film is about two rather unpopular best friends, Seth and Evan (Jonah Hill and Michael Cera) who regularly banter about sex, pornography, and women. One of them seems to be obsessed with the idea that they need to have sex in high school so that they can perform well in college. One day they get invited to a party that is being thrown by one of the most popular girls in school. There’s only one catch – they need to bring the alcohol. For that, they need the assistance of Fogell, or should I say “McLovin,” someone that not even they particularly like. And that’s the film. Sure, there are other plotlines such as how they will deal with going to different colleges, if they will ever learn that sex is not as important as they are making it out to be, and if their friendship will last to the closing credits. There are few surprises here, for the film follows an extremely familiar path. There are a few laughs, but far too few for a film that is roughly two hours long. The characters in the film also bear more than a slight resemblance to those in American Pie. Jonah could easily be mistaken for Kevin, Evan for Jim, and Fogell for Sherman. There’s even a woman at the party who reminded me of Nadia, the foreign exchange student who fell for Sherman’s Terminator reference at the end of the second American Pie film. The film tries to make up for its deficiencies by ending in a rather original way, but for me at least, it was simply too little, too late. (on DVD)