Review – Across the Universe 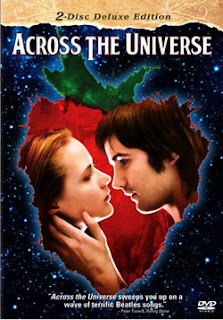 I have a feeling that, like Mulan Rouge and Mamma Mia, Julie Taymor’s Across the Universe is a film that the majority of people will either absolutely love or completely hate. It’s just one of those films. Visually stunning and creatively shot, the film also tells an utterly simple, predictable story. On a more positive note, it does have one of the catchiest soundtracks out there. In fact, once we hear the names of the main characters, Jude and Lucy, familiar Beatles songs already begin playing in our heads, and we watch in somewhat eager anticipation for our most beloved Beatles tunes to be performed in front of us. The question is: Is that anticipation enough to compensate for the films’ predictability, slow pace, and unjustified length?

The film is about a young man in Liverpool named Jude (Jim Sturgess), who journeys to a college campus in the United States to find the man who fathered him and then abandoned his mother while she was still pregnant. Jude finds him, they have a brief chat, and then the father disappears from the film for quite a long time. While at the university, Jude chances upon a fun-loving student disinterested in books and formal education named Max (Joe Anderson). They quickly become friends, an event which gives the film’s writers, Director Julie Taymor, Dick Clement, and Ian La Frenais, an opportunity to include the song “With a Little Help from My Friends.” The songs lyrics, which include the sentence “I get high with a little help from my friends,” are taken literally. Jude is later invited for Thanksgiving dinner with Max’s family. On this occasion, he meets Max’s sister Lucy (Evan Rachel Wood), a young woman in her last days of high school whose boyfriend has recently been shipped off to Vietnam. Lucy will soon lose her boyfriend, Max will soon drop out of school, and the three of them will find themselves in New York during a summer of great change for both the country they are in and themselves personally.

Along their journey of discovery, they meet the Janis Joplin-esque Sadie (Dana Fuchs), the Hendrix-like Jo-Jo (Martin Luther McCoy), a young woman named Prudence (T.V. Carpio), and Daniel (Spencer Liff), a leader in the protest movement against the Vietnam War. Sadie and Jo-Jo are interesting to watch even if their relationship does not add up to much, and the character of Prudence, while having a great deal of potential, seems to have been added so that someone could sing “Dear Prudence” to her. Once this happens, the character disappears for most of the film. It is Daniel’s role to come between Jude and Lucy. He does this first by monopolizing Lucy’s time and then by bringing American politics into Jude and Lucy’s home. Lucy wants to be active in the effort to end the war in Vietnam; Jude simply wants a normal job and a happy life with Lucy. Their dreams are therefore incompatible. However, this being Hollywood, a land in which love conquers all 99% of the time, we have every reason to believe that these characters will find a way to love each other in the end.

In a film in which the ending is never truly in doubt, the audience usually relies on the film’s main characters to be engaging enough to keep them interested. In Across the Universe, the audience must also rely on the film’s musical numbers, and there are plenty of them. The film includes versions of 33 Beatles songs, some faithful renditions, some completely new arrangements. Particularly interesting is the film’s version of "Í Want to Hold Your Hand.” Slowed down and expressing a characters heartbreakingly unrequited yearning instead of an abundance of energy, the song suddenly acquires a poignancy that it never had before.

I have always responded better to musicals in which the musical numbers help move the story along. This is not true of all of the musical numbers in Across the Universe. “I Want You” is used to show the impersonal nature of the U.S. army, “I am the Walrus” and “Being for the Benefit of Mr. Kite” allows the film to introduce characters that, while based on real people from the era in which the film takes place, have no major impact on the film’s central characters. They do however make the film longer and less focused. One could argue that Across the Universe is not really about Lucy and Jude, that the film is really about the era as a whole, about a time that included the Civil Rights Movement, race relations, drugs, mass protests, violence, and war. That certainly is a possibility. However, the film does not end with a comment on the decade or even on war in general. Rather, it ends with love standing triumphant over a throng of passersby, an ending that most audience members probably predicted ten minutes into the film.

When a film ends in exactly the same way as you thought it would, it is either completely logical, somewhat lazy or a little of both. Stripped of all of its moments of toe-tapping joy and visual astonishment, Across the Universe tells a pretty common tale: Boy and girl meet, they fall in love, they have problems, they work it out. If the audience invests emotionally in the tale, then the film works. Personally, I was only marginally involved in the film, despite the cast’s excellent performances overall. While others have said that the film’s creative musicals numbers and impressive visuals compensate for the razor-thin story, I felt they simple distracted from it. There’s no doubt that Across the Universe is beautiful to look at. However, if the most I can say about the film is how creative the parts of it that had nothing to do with the central story were, then am I really recommending the film? Not really. It’s like watching an action movie and saying, “You have to see it. The special effects are great.” In truth, neither musical numbers nor special effect can hide it when the emperor really has no clothes on. (on DVD)