Review – The Age of Innocence 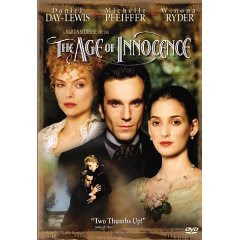 Martin Scorsese’s The Age of Innocence takes place at a curious time in U.S. history. It takes place in the 1870’s, more than twenty years after the push for women’s suffrage began and less than fifteen years after the conclusion of the American Civil War. Recession was just around the corner, and that event would cause both the push for women’s rights and the reconstruction of the South to the backburner. I mention this because the moment Larry Lefferts (Richard E. Grant) and Sillerton Jackson (Alec McCowen) appeared on screen, I could see in them the advantaged status and power that made it so hard for progress on women’s rights to be made. They are not villains in the classic sense of the word. They do not carry weapons or go around stealing elderly women’s purses. In fact, I’m sure most of the people that they socialize with consider them to be model citizens from families that they would be honored to have their children marry into. And yet, they – and the social group that they belong to – are the villains of this film simply because the ideas that they cling to and the words they use to express those ideas have the potential to cause an enormous amount of harm, and they don’t seem to care.

1870’s New York City, as depicted in The Age of Innocence, is filled with powerful families and influential connections. In the film’s opening scene, we learn that Newland Archer (Daniel Day Lewis) and May Welland (Winona Ryder) have recently become engaged. Newland, a lawyer is rather progressive in his ideas regarding the status of women in society. For her part, May seems more interested in people’s private affairs than affairs of the world. She doesn’t share her opinions with him, he explains later, if she even has them at all. However, there is also a sweetness to May, as well as a sense of innocent naïveté, that makes her the kind of young lady any mother would be proud for her son to marry. Towards the beginning of the film, we are also introduced to May’s cousin, Ellen Olenska (Michelle Pfeiffer), a woman who married and later fled an abusive European count. While the marriage itself was a scandal, it was nothing compared to the fallout from the ensuing separation. Confronted with the reality that a woman has had the audacity to run away from her husband, May and Newland’s acquaintances are quick to engage in speculation. How exactly did Ellen escape? Where did she stay at that time, and perhaps more importantly who did she stay with? These questions seem more important to people like Lefferts and Jackson than whether Ellen was happy or safe.

With Newland’s help and that of May’s grandmother, Ellen is slowly accepted back into high society, even though she often unwittingly breaks long-standing rules regarding social behavior. Her improved status is a mixed blessing, for it makes her the focus of the attention of one Julius Beaufort (Stuart Wilson), a man known for both his business sense and philandering ways. Soon, Beaufort is visiting her at her house, as well as supposedly private locations. Is it a relationship? It’s hard to say for sure. What matters though is that everyone thinks it is, and what everyone thinks becomes an accepted truth in very little time at all. Public sentiment turns further against her when she broaches the subject of divorce, an idea that Newland supports, but which others see as being against the nature of womanhood.

In Scorsese’s skilled hands, The Age of Innocence hits all the right spots. The movie flows at a flawless pace, allowing conversations to develop just as they would in the real world. Topics are raised naturally, divergent opinions are expressed, and politeness is ever present. It’s easy to miss the subtle hints that what is being said during these conversations is not staying just between the two people engaged in the conversation. In addition, Daniel Day Lewis, Michelle Pfeiffer, and Winona Ryder each give incredible performances, and I can say with confidence that this is my favorite of Daniel Day Lewis’ many amazing acting jobs.

It would be wrong to label The Age of Innocence as the story of a man torn between two women, for that label would imply that Newland were free to choose one over the other. Rather, the film is about a man torn between the woman he is expected to marry and the one society prevents him from marrying. As he explains it, while legislation favors divorce, society does not. The only way for Newland and Ellen to consummate their love would be to have an affair, yet to do so would cast all of Newland’s generous and honorable acts in a new, much less noble light. They would now have been done to achieve a rather immoral goal. And so to preserve Newland’s integrity, their love must not be acted on. “I can’t love you unless I give you up,” Ellen tells him. It’s a comment that probably makes him love her even more. (on DVD)