Review - The Emperor in August 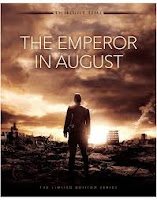 Masato Harada’s The Emperor in August is simple exhausting. It covers months of history, includes far too many characters for anyone without an encyclopedic knowledge of Japanese history, and mistakes loud moments in which characters scream at one another as character development. Still, like the slightly better Valkyrie and the far-superior Downfall, it presents an often fascinating depiction of a critical time in world history, one in which – if we accept what we see as factual – could easily have been followed by many more bloody and ultimately fruitless months of fighting.

First, though, it should be said the title is somewhat misleading. The film begins, not in August of 1945, but April of that fateful year, for that is when Emperor Hirohito coaxed Kantaro Suzuki into assuming the position of Prime Minister. Well into his seventies, Suzuki (Tsutomu Yamazaki) is reluctant and tries gently to talk the Emperor out of the appointment. It doesn’t work. Suzuki’s primary task is to find a way out of the conflict, and to help him in these efforts, he enlists General Korechika Anami (Koi Yakusho) to be Minister of the Army. The appointment is an interesting one: Presumably Anami is someone who can help complete the Prime Minister’s mission, yet his appointment is said to lift the spirits of the Japanese army, members of whom have visions of fighting and winning a “Decisive War at home.” The film then follows these two characters as they maneuver their way between competing branches of the military and contend with an exhausted public, which we learn has begun giving the army the “cold shoulder,” and militaristic youth who want nothing more than to fight to the death.

The second reason that the title is misleading is that the film is not really about the Emperor. Unlike Alexander Sokurov’s meditative film The Sun, in which the Emperor was depicted as being somewhat aloof from the war and its tragic events, The Emperor in August uses the Emperor to get the ball rolling and then has him re-appear sparingly, for example, at key cabinet meetings or during his many jaunts through his garden. He takes on a more prominent role as the film moves toward his historic address to the Japanese people, during which he announces that Japan has accepted the conditions of the Potsdam Declaration. And in a key scene, the film practically absolves the Emperor of any blame for the war by declaring it to have been triggered in his name, not by him directly, a remark that puzzled me. After all, the Emperor ordered the attack on Pearl Harbor and even handwrote a note declaring war on the United States.

The first forty-five minutes of the film are problematic. Harada, who also wrote the screenplay, breezes through four months of history as if they were only marginally important. To do this, he keeps the scenes as short as can be, giving characters just enough time to introduce a problem before cutting to the next meeting or character. For example, in no time at all, the film goes from Roosevelt’s death to Hitler’s death to the firebombing of Tokyo. In real life, twenty-nine days transpired between these events, days I’m sure were filled with both nervousness and armed conflict. Here, they just pass by in a black out as if nothing of consequence occurred, and this is a mistake, for what has been included – Anami’s respectful condolence letter and frightening images of Tokyo burning – could easily have been stretched out. In fact, the latter was so interesting that I remember thinking how intriguing an entire movie about Japan’s experience during the firebombing would be.

The movie reaches its peak when it finally gets to August 6, 1945, the day that an atomic bomb was dropped on Hiroshima. Here, Harada makes a series of fascinating choices. While we see the mushroom cloud, we do not see its aftermath. Instead, Harada focuses our attention on the members of the cabinet, who all react in horror and disbelief. Now the need to end the war is even greater, yet they cannot come to a consensus on just how to do it. Twice, we see Suzuki appeal to the Emperor for a decision, and each time he defers to the cabinet. This is as close as the film comes to criticizing the Emperor. From there, the film become a race against time, not to prevent a battle between Japanese and American troops, but to stop a coup attempt by soldiers and generals under the false impression that Japan can still be victorious. This part of the story was new to me, and I watched it with great interest.

Unfortunately, in the film’s last act, Harada resorts to the quick cuts and frequent jumps in location that he employed in the film’s first act. The result is a mind-boggling, overly complicated finish during which I struggled to remember who was who and which side certain characters were on. I found it easier just to follow one particular soldier, all the while reminding myself that what was going on was in pursuit of the Emperor’s recorded message formally announcing Japan’s surrender, a word that, as the film makes clear, the Emperor never actually uttered.

A few other things in the film continue to resonate: the burning of official records of wartime activities, the Emperor’s inquiry into whether Anami’s daughter was able to get married despite the conflict, Suzuki’s son wondering aloud if Japan absolutely had to fight to the last man, the frantic search by translators to determine the meaning of the phrase subjected to after it appears in the U.S.’s response to Japan’s conditions for surrender, and their response when they discover that the Emperor would have less authority than the Supreme Commander of the Allied Powers.

So, I have mixed feeling about The Emperor in August. On the one hand, it is frustratingly structured and directed. On the other, it offers a unique and important look at history from a point of view that is not as well known outside of Japan. I was grateful for this, for too often history is glossed over, major incidents reduced to one-line descriptions if they are included at all in history books. Now, the firebombing of Tokyo is real to me and the delay between the dropping of the first atomic bomb and the end of the war more understandable. And I never knew there was an attempted coup. So, the movie has done its job: It entertained and informed. In also includes superb performances by Yamazaki and Yakusho. To me, that’s enough. Sometime you just have to take the bad to get the good. (on DVD and Blu-ray)

*The Emperor in August is in Japanese with English subtitles.
Posted by Azrael Bigler at 9:00 PM