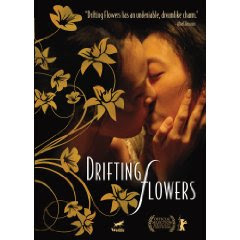 Most of the central characters in Zero Chou’s Drifting Flowers have had more than their fair share of obstacles thrown at them. For one, each of them is either gay or lesbian in a country that still places enormous pressure on the continuation of the family line through marriage and child birth. It also appears that sons in Taiwan are more likely to inherit family property than daughters are, so if a daughter doesn’t marry or come from a rich family, she could find herself dealing with life’s challenges alone. It’s highly likely that a film about characters dealing with issues arising out of these situations would be compelling enough to hold an audience’s attention. However, Chou, who wrote the screenplay as well, gives each of the film’s characters additional impediments, and in some cases, this is not a good thing.

The first part of the film is entitled “May.” May (Pai Chih-Ying) is the younger sister of a blind singer named Jing (Serena Fang). When we first see Jing, she is singing a slow, repetitive ballad in front of a bunch of noisy guests seemingly doing everything but listening to Jing’s sweet melodious voice. Instead they laugh and speak rather loudly, smoke and drink, and consume plates and plates of food. They seem to be oblivious to the fact that there is a singer performing for them. Yet they are listening, a fact that is evident in a later scene when a patron gets angry when Jing suddenly stops singing. The scene reminded me of something Mark Salzman is told in Iron & Silk after he stops playing the cello because everyone at a campfire is talking - “This is how we listen.”

In the audience sits May, her eyes focused intently on Diego (Chao Yi-Lan), the young, somewhat masculine-looking woman accompanying Jing on the accordion. Later, May will ask her if Diego is male or female, a question Diego has unfortunately had to get used to. It is May’s responsibility to walk her sister home after every performance, and her sister’s responsibility to make sure May does all of the things a young child is supposed to do – go to school, eat right, finish her homework, make sure she is safe. It’s a daunting task, but one that is all the more challenging for someone without the gift of sight. As a result of that, social services are pushing Jing to allow May to be taken care of by foster parents. Further adding to the family drama are Diego’s blossoming feelings for Jing and May’s blossoming feelings for Diego.

Later in the film, we are introduced to Lily (Lu Yi-Ching) and Yen (Sam Wang), whose marriage Jing and Diego sing at. Their marriage is a sham, but there are good reasons for that. Lily loves a woman named Ocean, and Yen loves his best man. Years later, Lily sits silently at a park surrounded by other wheelchair-bound seniors and their foreign caretakers. A man attempts to approach her, explaining to those around her that he is her husband. Lily, however, thinks he is Ocean, and she happily invites “her” to stay with her. This alone would make for a pretty awkward situation; it’s made even more uneasy by the fact that Yen is dying of AIDS.

This is already a lot of drama for a film that is only ninety-six minutes long to have to sort out, and I haven’t even brought up the film’s final third, which has to do with Diego’s past and how she became comfortable with her sexuality. And perhaps that is the problem with the film – it’s simply too short to adequately resolve all of the complex issues in the film. To make up for this, the film conveniently skips key moments in these characters’ lives and in doing so prevents viewers from seeing what must have been some fascinating and complicated conversations. I would have enjoyed seeing how May copes with her feelings for Diego and just when in her young life she realizes those feelings are transitory. I would have been interested in seeing what happens to Jing and Diego over the years, as their relationship, although a bit rushed, seemed realistic. I also liked the idea of a dying man having no other option but to seek help from the women he married to hide his real nature from his parents. This could have led to some very interesting conversations about the kinds of lives they’ve led and how they feel about having to live a lie. However, conversations such as these are rare, replaced instead by awkward moments in which Lily dresses a reluctant Yen up in woman’s clothes and goes to a park with him. This leads to an obvious confrontation involving Yen and a group of teenagers who find it funny that a man is dressed as a woman. Despite the fact that the altercation was foreseeable, the scene does lead to an interesting moment, as scores of people who had stared and whispered about Yen earlier in the scene flee as he is being pelted by a basketball. Only Lily comes to his defense.

I’m of two minds about Drifting Flowers. Part of me wants to like it, strictly for the boldness and sensitivity with which it approaches a very complicated topic – the first romantic feelings of someone brought up by a gay or lesbian parent or guardian. May’s feelings for Diego are perfectly natural and likely temporary, seeing as how she has likely grew up around such relationships. However, it will be quite a while before the majority of people are comfortable with that notion. I also liked parts of the Lily and Yen’s story and felt that the third part had much to offer viewers, not only in its exploration of just who Diego and Lily are but also in what it reveals about Taiwanese culture. I found most of the characters intriguing, in particular Jing, May, and Yen. However, the film was surprisingly uninvolving. Lily can’t adequately come to terms with Yen’s condition and Yen can’t communicate with Lily effectively. Therefore, what should be said isn’t, and we don’t get the scenes necessary to make the audience invest in either of them emotionally. In addition, Diego and Jing’s relationship begins rather quickly, without anything resembling a deep conversation or a heartfelt moment to establish their connection. The film’s final act involves Diego meeting a dancer who just happens to be a lesbian and just happens to have no problem hooking up quickly. She also just happens to be Lily (now played by Herb Hsu). I’m not saying that things like this don’t happen in real life; however, in this one, it felt more like a cliché than a realistic turn of events. Add all of this together, and I’m afraid what you get is a film that tries hard but only marginally succeeds. Perhaps in this case less would have been more. (on DVD)

*Drifting Flowers is in Taiwanese and Mandarin with English subtitles.
Posted by Azrael Bigler at 9:39 AM