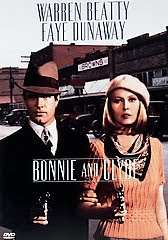 Hollywood’s version of Clyde Barrow (Warren Beatty) views the world through such a naïve lens that one can almost overlook the fact that what he is doing is morally reprehensible. He appears to see his and his gang’s actions as rather akin to stealing a loaf of bread in order to eat. Sure it’s against the law, but what is the alternative - starvation? Clyde feel so confident that history will judge him kindly that he proudly announces to complete strangers that he is a bank robber and is then shocked that his victims would harbor enough ill will towards him to come at him with a butcher’s knife. It’s one thing in his mind for the authorities to be after him, but he expects everyday common folk to greet him the way some people greeted criminals during the Great Depression, with gifts, flowers, and enthusiastic embraces. After all, these were the men many said were standing up for the little guy, ensuring their right to drink and fighting against oppressive government policies. In Clyde’s mind, he’s just like the Al Capones of his time. It’s safe to say then that he never completely sees the world for what it is – a place where the men he’s caused to become laughing stocks will stop at nothing to hunt him down, where nobody cares whether he feels forced by unfortunate circumstances to do what he does.

His partner in crime, at least the first one of them, is Bonnie Parker (Faye Dunaway), a woman whose yearning for excitement and stimulation can no longer be easily placated. It doesn’t take much for her to be drawn to Clyde, just a gun, a stick-up, and a getaway. There’s isn’t much to their courtship, and there appears to be even less that initially keeps them together. He is content to wile away his evenings playing board games with his brother; she is just bored. Perhaps what unites them is that initial, justifiable attraction to someone that offers you the chance for a life of excitement and wealth. Perhaps it’s simply the fact that before they know it, too much has occurred for them to go their separate ways. Their names and faces are in the paper alongside the word wanted in big bold-face print, and even if they wanted to – and there is some evidence that they do – leaving now would be next to impossible.

The story of these two controversial figures is told in Arthur Penn’s well-made 1967 film, Bonnie and Clyde, a film has two unofficial acts. The first act presents their courtship and the recruitment of their gang in a fashion that is simultaneously comic and oddly patriotic. Clyde explains his choice of careers as a way of living up to his potential and not settling for the ordinary. These same sentiments could just as easily have come from a candidate for the highest office in the country. Bonnie and Clyde meet C.W. Moss (Michael J. Pollard), the third member of their gang, at a remote gas station and before knowing anything about him ask him to join them. He turns out to be a wise pick, even if he could have used a refresher course in automobile management during a heist. The final two members of the gang consist of Clyde’s brother Buck (Gene Hackman) and Buck’s wife Blanche (Estelle Parsons), who is somewhere between being a willing participant and a hostage. She loves Buck and wants to stand by him, but as the daughter of a preacher, she abhors what he and his brother are doing. Just what’s a woman to do in this situation? Eventually she asks for her share of the loot.

The first half of the film sees the gang enjoying many laughs together, making a mockery of law enforcement, having a ball while making their getaway, and robbing bank after bank, after which they take great pains to make sure that those they have robbed know just who it was that robbed them. There is a slight bit of nobility in them. While they have no qualms about taking money from an institution such as bank, it’s a different story when it comes to a customer’s hard-earned money. However, that’s about as far as their charity extends. The latter half of the film has a completely different tone. Gone is the laughter, as well as the ease and fun, with which they made their earlier escapes. Replacing it is an impending sense of danger, the feeling that no matter how far they run, they will never be completely safe, and Clyde’s dire warning to Bonnie after a nearly-botched robbery turns out to be true. They do not have a moment’s peace.

Normally, in a movie of this genre, I wouldn’t care very much. However, Bonnie and Clyde stripped me of much of the numbness I often feel when watching movies about criminals. This is partly because the film does an incredible job of personalizing its lead characters. We see Clyde’s softer side, we hear him talk about his physical limitations, and part of us cringes when towards the end of the film, we hear evidence that his naïveté has not begun to abate. This is a man who is genuinely unaware of the storm that is following him. I was also moved by Bonnie’s increasing loneliness. This is a woman who left home with dreams of adventure and who now has no place she can definitively call home. Her reunion with her mother, although a tad bit unrealistic, is indeed heartbreaking. I was less impressed by the film’s other characters. C.W. and Buck remain rather undeveloped; in fact, Buck is pretty much reduced to telling the same joke over and over again and performing impressive physical feats during robberies. When a story is repeated more than once in a movie, there is usually a message in it somewhere. For the life of me, I couldn’t find one in the story Buck tells. In contrast to these two characters, Buck’s wife Blanche remains intriguing throughout the film. Here is a woman who loves her husband so much that she is determined to stay by his side even as he returns to the life that she thought he had left for good. And yet, she does not deliver passionate, long-winded sermons about the immorality of robbing banks. She’s just there, standing by her man, perhaps hoping he comes to senses before it’s too late. She doesn’t realize that it already is.

I admit that I enjoyed the second half of the film a bit more than the first half. To me, it’s always much more interesting to see gangsters fall than it is to see them rise. I was also slightly annoyed with the way the first half of the film tries to win the audience over by continually showing them what jovial folks Clyde’s gang is, a portrayal that the film’s soundtrack plays a significant role is creating. Every time a banjo plays, it signals the starts of something fun, like a getaway. I’m not sure about Bonnie and Clyde, but I doubt most people would smile and laugh as bullets were whizzing by their heads, just as I doubt law enforcement officers would have the gang surrounded and suddenly decide to take out their car instead of the gang itself. To me, what followed was much more reminiscent of the many ridiculous ways that James Bond has cheated death than how two normal characters such as Bonnie and Clyde would. However, where other films would fail, Bonnie and Clyde succeeds, for it succeeds in making us care about the fate of these two violent, tragic characters. Sure, there’s a bit of emotional manipulation involved in this, but who wouldn’t be moved by a man’s sudden realization that he’ll now be remembered? I was. The thought that he’d be remembered as a criminal never even entered my mind. (on DVD)

Labels: 3 and a half stars, Arthur Penn, reviews