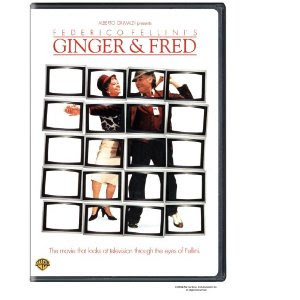 We meet Amelia first. She is in Rome’s train station, wearing the plain, respectful clothes of the married woman from a northern town, which she has in fact become. Amelia, we learn, is in Rome for one final pax de deux with her ex-partner on a TV variety show called We Proudly Present.

Several minutes into the film, Fellini tips us off that the role-types and conflicts revealed in Amelia’s and Pippo’s relationship are intended in some way to reflect the real life conditions of his and Masina’s marriage. When Mastroianni/Pippo arrives on the scene, we rarely see him without a hat; Mastroiani’s Guido in 8 ½, also wore a hat because Fellini famously wore hats and was rarely seen on a film set without one.

Viewers familiar with Fellini’s films will recognize—or, more accurately, relish identifying—the references in this movie to his body of work. For example, when Amelia rides to the hotel from the train station, the van passes a series of stylized billboards that I thought were reminiscent of the milk billboard which was a key element in The Temptation of Dr. Antonio, the short film in the anthology movie Bocaccio ’70. When Amelia looks outside a window, she sees a towering contraption straight out of 8 ½; a gang of motorcyclists roar by her during an evening walk evoking a famous scene in Roma; and, of course, the co-stars of the variety show—acrobats, midgets, psychics and clerics—recall the paean of Felliniesque characters ranging from Variety Lights onward.

Fellini’s signature flying dream image reoccurs in many of his movies and I believe is reflected in the characters’ names. “Amelia” reminds us of the historic/mythic air navigator Amelia Earhart. “Pippo,” a quick search on Google revealed, was, in Italian urban myth, the name of an aircraft during the Nazi occupation of Italy that people believed loomed nightly over the skies to instill terror in the towns below.

The strong nostalgic element in Ginger and Fred is counterpoint to its sustained rant against the contemporary culture of television. The reunion of Amelia and Fred occurs in an Italy that is a generation or three removed from the Italy of Giuseppe Tornatore’s Cinema Paradisio.

Historically, until the 1970s television in Italy was considered a national public service medium. In 1976, a ruling by the Corte Costituzionale allowed the transmission of radio and television programs at the local level and thus the floodgates opened for nonstop competitive, commercial television. By the mid-eighties, when Ginger and Fred was filmed, television seemed to have saturated daily life. And so, at every juncture, this film offers satiric commentary on the strangely powerful medium and its endless stream of stupefying entertainment.

In the book I, Fellini (1994) by Charlotte Chandler, the director compared movies to TV, as follows:

“Going to the movies is a true personal choice to go see one film or another film. The person walks into a dream. When the film ends, he leaves and walks back out into real life. It’s different with television. Television talks to us, at us, when we are defenseless, even unaware. Its message of vulgarity and wrong values is transmitted to people watching while they are on the phone arguing with each other, even eating conversationless dinners. The best way to watch TV is while you’re asleep.”

For me, the great cinematic moment in Ginger and Fred is the blackout scene. As a dishelved and unconfident Pippo is about to start the dance routine, a blackout occurs in the studio that lasts several minutes. In the dark Pippo expresses his fears and anxieties to Amelia, a rare moment of truth telling. By now we have learned that Pippo had a nervous breakdown following their break up. Since then, he has seemingly drifted through life, as sure as Amelia lived the life of a secure bourgeois housewife. While the blackout lingers on, Pippo encourages Amelia to sneak out of the studio with him. But, suddenly, the lights come back to life, and the two dancers must face the music—and a live, TV audience.

In 1992, Fellini and Masina made a trip to Hollywood to pick up a special Oscar given in recognition to his body of work. Later, Fellini recalled how that evening at the Oscars evoked something he found especially endearing about Ginger and Fred. Again, from I, Fellini:

“When Giulietta cried at the Oscars, I suppose that she was crying with joy for everything that was, and with sorrow for everything that wasn’t. That moment had the same magic for us that Giuleietta and Mastroianni had felt as “Ginger” and “Fred” dancing together again, after all those years, together again. Their professional and their personal life was summed up in that moment.”

Posted by Azrael Bigler at 9:19 PM