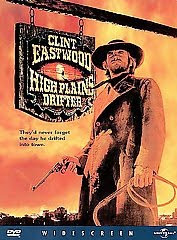 I suppose a movie does not need a hero, but does a movie need a lead character as dark as the Stranger (Clint Eastwood) is in Clint Eastwood’s High Plains Drifter? Within twenty minutes of arriving in the town of Lago, the Stranger has shot three people and raped a young woman who may or may not have been trying to latch herself onto him in the first place. By the end of the film, he’ll have added to both tallies. Just why the Stranger is in Lago is a mystery, yet that doesn’t stop the town from trying to hire him to protect it from three soon-to-be-released criminals who appear hell-bent on returning to Lago and burning it to the ground. The Stranger eventually accepts and begins preparing the town for the eventual showdown. To be fair, the three criminals do have a legitimate grievance.

This film is ultimately a mixed bag. On the one hand, the film draws you in as you wonder along with the townspeople just who the Stranger is and what he is planning to do. On the other hand, writer Ernest Tidyman seems to be hesitant to completely explore the Stranger’s dark side, so he shows him being kind to a few Native Americans and befriending a man named Mordecai (Billy Curtis), who has been feeling disrespected for quite a long time – and for good reason. In addition, a number of scenes seem to be trying too hard to be humorous, and they succeed only mildly. Another problem is that since we anticipate the eventual showdown between the Stranger and the three ruffians, much of the events that occur before this confrontation lack the necessary bite to completely draw viewers in. Much of the drama in the film revolves around the Stranger’s identity, yet as the film progresses, it’s not hard for viewers to piece that together either, leaving viewers in the sometimes awkward position of knowing more than most of the characters in the film.

It is sometimes said that an audience will forgive an average film as long as it ends well. The climax of High Plains Drifter is unfortunately simultaneously dramatic and silly, consisting of odd moments in which long-time partners stand around, mouths gaping, as one of their own is in trouble. Moreover, some of the physical things the Stranger does at the end of the film seem more appropriate for Spider-Man or the Mothman than for a wandering cowboy. I have no doubt that some viewers will find the film exciting; I, however, found myself shaking my head in disappointment far more often than cheering. (on DVD)