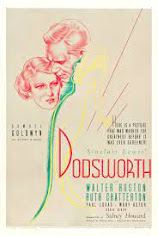 William Wyler’s Dodsworth has a moment of absolutely beautiful resolution, and if the movie gods had had their way, it would have been the film’s final impression, a poignant reminder of one of life’s bitter truths about “normalcy” and its vastly different effect of men and women. The problem – for Warner Bros. most likely – is that it’s a downer, and so, instead of cutting to the ending credits, there’s a fade in and the narrative continues in search of happier circumstances regardless of the inconsistencies and sheer coincidences that have to occur for those merrier trails to emerge. Had these impulses been suppressed and audience trusted not to revolt at the notion that not every hero and heroine rides into the sunset, Dodsworth would have been a masterpiece. As it is, it’s damaged goods.
The film’s central characters are Sam Dodsworth (Walter Huston) and his wife, Fran (Ruth Chatterton). In the opening scene, we see Sam standing at a massive window that overlooks the automobile plant that he has run for the past twenty years. The camera then pans to a newspaper, the headline of which announces the sale of the plant. As he walks to his car for the last time, some of the men he employed stop to shake his hand, thank him, and wish him well. And then he is off. The factory continues to churn behind him, but in a moment of poetic foreshadowing, Sam does not look back. He is simply not that kind of man.
So, what’s next for Sam? Why, travel, of course, that hobby that so many people put off due to insufficient finances, commitment to their jobs, and the overwhelming responsibilities of child-rearing. Their destination is Europe, and the plan is to spend six months country-hopping. Thus, you’d expect them both to be excited and jovial, yet the night before their departure, there’s a telling exchange. Sam speaks about the opportunity his company and its success has provided them; in her response, Fran hints at an entirely different consequence – long days spent either alone or raising their daughter, evenings spent entertaining her husband’s co-workers and industry bigwigs, hours spent in the role of host to people she hardly knew. In other words, his success meant her confinement. One can only assume, then, that to her the vacation represents her release.
The exact ages of the Dodsworths are unclear. Huston was 49 in 1936, Chatterton 44, and these ages seem appropriate for their characters. They have an adult daughter who has recently married, indicating that they had a child early on in Sam’s career, a fact that would have restricted Fran’s life considerably. However, early in the film there’s reference to the age of 35, a number that is problematic when it comes to marriage and motherhood. However, it also helps explain the importance Fran places on social activities and the attention of male suitors. It could also mean that Sam was the first person she dated, and I think most people would agree that the life you think you’ll be content with at 15 is not always the life you want twenty years later.
And this is essentially the message of Dodsworth, that two people can grow apart and not even be aware of it. In Sam, we see the experience of many men, for having both a successful career and a family can indeed breed overconfidence and complacency. After all, everything can seem fine when your career is going well. Perhaps this is why Sam is surprised when his wife does not share his enthusiasm upon seeing the beacon of a lighthouse from the upper deck of the ship and when she insists that they put on their best attire even when on vacation. In one key exchange, a passenger on the ship named Edith Cortright (Mary Astor) tells Sam, “One drifts for lack of a reason to do anything else,” and while she is talking about her habit of traveling, the sentiment helps explain Fran. For twenty years, she’s been drifting.
Mrs. Cortright is a central reason why the film’s final act seems so superficial. After meeting the Dodsworths at sea early in the film, her most poignant moment comes when she recognizes something in Fran that gives her pause. She then delivers to her a message that is is brief and powerful: “Don’t.” And then she is gone, and that is where she should have stayed, for then she would have been a harbinger of things to come, someone who recognized the path Fran was on and tried in vain to steer her to safer waters. Instead, she becomes just another minor female character who conveniently brings “joy and purpose” to a much older man in far too little time for those sentiments to convincingly be the result of true love. Alas, that’s what Hollywood thinks audiences want, and in the end, it is what brings down a masterpiece. (on DVD and Blu-ray)
3 and a half stars
Posted by Azrael Bigler at 1:32 AM