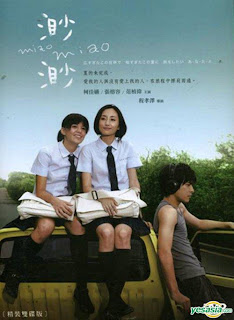 Cheng Hsiao–tse’s well-acted directorial debut Miao Miao relies heavily upon what is rapidly becoming one of the most overused narrative techniques of our time – the fractured narrative. Used well, as it was in 21 Grams and Memento, the technique can add enormous emotional power to a film. Used poorly, it comes across as a technique solely intended to create the illusion of suspense or importance when none in fact existed in the first place. Unfortunately, Miao Miao is an example of a film that employs this technique yet simply has nothing monumental or earth-shattering to lead up to. That said, it’s hard to see any other way the film could have been structured.

Imagine for a moment that we saw the film in true narrative form. We would first see a young music producer named Chen Fei (Fan Wing) meet a young singer named Bei. The two are instantly drawn to each other, and they share a night of passion. We would then see Chen Fei’s hesitance to fully acknowledge the relationship and Bei’s slight emotional unraveling. Soon, we would watch Chen Fei and the rest of Indigo, the band Bei was a member of, have to come to terms with Bei’s sudden death. We would see Chen Fei delete the songs Bei had recorded from his computer and then withdraw from the world, only to resurface later as the owner of a second-hand music store somewhere in Taipei County.

We would then be introduced to Miao Miao (Ke Jai-yan), a young Taiwanese girl who has spent most of her life in Japan. We would see her struggle to cope at first, for she is both without friends and the unfortunate recipient of immature young men’s aggressive flirtations. We would see her meet Xiao Ai (the always reliable Chang Yung-yung) at an MRT station and quickly become good friends with her. Soon Miao Miao would go in search of the bakery where her grandmother says she met the greatest love of her life, only to find Chen Fei’s stop where the bakery had once stood. We would see the way Miao Miao seems to instantly take a liking to Chen Fei, despite the fact that Chen Fei hardly speaks, even when spoken to.

Viewed in this order, what follows would have absolutely no suspense whatsoever, as we would already know that Chen Fei is both grieving and not interested in women. We would likely watch Miao Miao’s attempts to get his attention with a tinge of sympathy, for we would know that no matter what she did, she could not win his heart. In other words, the film would be a sort of romantic tragedy about unrequited love, which is clearly not the effect that screenwriters Cheng and Tsai Yi-fen had in mind. Judging from how events in Miao Miao are actually presented, it seems they intended for viewers to think that true love was indeed a possibility for Chen Fei and Miao Miao. In short, in chronological order, the film would have an entirely different feel to it. But would it be a better film? I doubt it. The events would simply be coherent a little bit earlier.

This is of course not to suggest that Miao Miao is a good film, over even one that comes close to being good. For one, Miao Miao supposedly takes place over a year, a fact that surprised me when it was revealed. The film also has a running time of just eighty-four minutes, which is simply not enough time to adequately make the three stories at the heart of Miao Miao compelling. In addition, the film focuses on completely insignificant subplots, such as Miao Miao and Xiao Ai’s attempt to win a cooking contest, yet does not focus nearly enough on storylines that had enormous potential, such as Xiao Ai’s strained relationship with her father. On the plus side, I was deeply moved by Chen Fei’s desperate search for Indigo’s demo CD, for he realizes that without it, his memories of Bei will one day have completely faded away.

There is one additional romantic storyline that should be mentioned, and that is Xiao Ai’s growing feelings for Miao Miao. It’s clear to viewers, as well as to Miao Miao herself, just what Xiao Ai’s feelings are, yet for this storyline to have possibilities, Miao Miao must be open to it, which she is not. And therefore, we have a storyline – two in fact – that have no possibility of ending in the way viewers are so accustomed to seeing a movie like Miao Miao end. I’m not suggesting that there must be a Disney-like ending at the end of every film, but without some sort of payoff at the end of this patricular film, I was left wondering what the point was. I suppose it could be Miao Miao’s realization that not everything ends like the fairy tales children read when they’re young, but a message like that will not come as much of a surprise to viewers.

I suppose it’s a bad sign when you’re watching a movie and you suddenly think to yourself, “Hey, I’ve been in that second-hand shop!” Or when you’re eyes begin to roll at a scene involving a young girl being afraid of chicken legs. Or when you think to yourself that what you just heard two teenage girls talk about was a bit more information than you needed. Or when you find yourself screaming at the screen, “People don’t run after airplanes!” Maybe I’m wrong about the film being too short. Maybe it should have found a way to do more with what little time it had, for as it is, it’s hardly worth devoting even eighty-four minutes to it. (on DVD in Region 3)

*Miao Miao is in Mandarin, Taiwanese, and Japanese with English subtitles.
Posted by Azrael Bigler at 7:04 AM