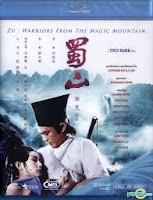 A character in a Hong Kong supernatural comedy should never feel either too safe or too worried, for at practically any moment a new character is just waiting in the wings to leap out. This character could be a tree or water god that suddenly appears because he’s been following the same demon our hero is fighting and has only now decided to make his presence known. He could also be an evil spirit throwing yet another obstacle into our hero’s path, as if he needed another chance to prove his heroism. I imagine for audiences in Hong Kong, this is less of an obstacle. However, audience from western countries may find themselves scratching their heads wondering why a man’s beard just stretched out from behind a rock and latched itself onto our hero and just who the mysterious man attached to the beard is suppose to be. The scene I’m referring to is in Tsui Hark’s 1983 film, Zu: Warriors from the Magic Mountain, and even after seeing the film, I’m still not sure I can explain it all to you.

Perhaps it’s not important, though. Perhaps what’s important in a film like this is the overall journey and its endgame. So here’s what I can tell you about this. Apparently, a Blood Devil has decided to create chaos and destruction all over the world, and it will take two swords, used simultaneously, to destroy him. Oh, and our heroes have only forty-nine days to retrieve the swords from an immortal character who seems to have nothing better to do with her time than sit cross-legged while levitating over a lake. Not only can this character break the laws of physics, but it seems that she can also communicate with people telepathically, as well as trigger one of the most random costume changes you’re likely to see in a film. In the scene, two characters go from looking as if they belong in a Hong Kong period piece to doubling for the characters in the Double Dragon video game series, which I’m not exactly sure is a step up.

The journey in the film initially involves four characters. First, there’s Ti Ming Chi (Biao Yuen), a scout for a pair of local warlords. Ti finds himself in a bit of a catch-22 when each warlord gives contradictory orders and he’s asked to decide which order to follow. Whatever answer he gives is bound to displease someone, and soon he’s running for his life. In a cave full of creepy dark demons with glowing eyes, he meets Ting Yin (Adam Yeung), a man with honor and special powers that allow him to fight off demons, devils and evil spirits. Of course, Ti asks if he can become Ting’s apprentice and true to form, the master is at first non-committal. Rounding out the group are a monk named Hsiao Yu (Damian Lau) and his apprentice Yi Chen (Hoi Mang). The less experienced two hit it off right away, while the two that should be uniting against their common enemy instead refuse to work together, each blaming the other for their enemy having escaped.

Zu works for the first half an hour and then gets bogged down when our heroes have to seek help from the elusive, secluded woman known as the Countess (Brigitte Lin). She lives in a secret lair filled with young women who it seems have never left her sanctuary, and she only see visitors if their visit is approved by an odd blue flame that flickers out if their meeting is not meant to be. Brigitte Lin is fun to watch as always, yet the scenes with her are unnecessarily drawn out and just when you think they’re over, another emergency keeps Ti and his team there longer, which further delays the completion of Ti’s mission. I suppose the scenes are intended to show Ting and the Countess developing a bond. However, if one forms, it’s a rather weak one. During a later battle between Ting and the Countess, Ting actually rides a clay statue of an elephant. The scene is clunky and poorly choreographed, and it’s more head-scratching than thrilling.

Zu: Warriors from the Magic Mountain tries hard to find the right balance between comedy and supernatural adventure, yet it only partly succeeds. It wants to be a film with the witty banter of Ghostbusters, the thrills of Raiders of the Lost Ark, and the infantile humor of the American Pie films. It’s a hard combination to pull off, and at key moments, it focuses on humor when it probably should have focused on the mission at hand, for some of its attempts at humor detract from the film’s more serious moments, and those more serious moments make it hard to laugh at its attempts at humor. It should be said that the film also has its fair share of plot holes and inconsistencies. Also working against the film is the special effects, which have not aged well. They are barely a notch above the effects in Desmond Davis’ 1981 film Clash of the Titans, and the film’s closing moments resemble the bright, colorful screens often used to depict psychedelic acid trips in television comedies, the difference being that the effects in Zu are not part of the joke.

Still, Zu: Warriors from the Magic Mountain manages to stay watchable despite its convoluted plot and uneasy combination of genres. Part of the credit for this belongs to the cast, who give the material the amount of energy required for the film to remain at least somewhat interesting throughout. Along with Yuen, Yeung, Lau, Mang, and Lin, Moon Lee deserves mention for her lively performance as Mu Sang, the Countess’s guard. However, it says something that my favorite moments in the film involve Ti and a soldier he meets after temporarily escaping the wrath of the two generals in the film’s opening scene. The soldier is magnificently played by legendary actor Sammo Hung, who has some additional fun in a dual role later in the film. The scenes between these two characters are humorous, and the action scenes they share are well-choreographed and clever. I wish I could say the same for the rest of the film. (on DVD and Blu-ray)

*Zu: Warriors from the Magic Mountain is in Cantonese with white English subtitles.
Posted by Azrael Bigler at 12:00 AM