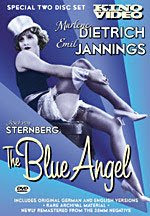 It is hard to say what kind of person Professor Immanuel Rath is. His home is messy and filled with cigar butts; his bird has died and he did not even notice. He also has an odd habit of blowing his nose and wiping his brow with the same handkerchief. It’s equally difficult to say what kind of teacher he is, for his students call him garbage and write insults in his books and on his blackboard. Furthermore, his method of teaching seems to involve simply calling on students to recite something they’ve learn and when that fails, to have them write a paper. At no point in the film does the audience ever see even a shred of quality teaching from him, and yet everyday he dutifully reports to work and expects to be able to inspire. He seems to have won the respect of only one of his students, and that student pays a heavy price for that respect.

Maybe the professor is a quality teacher, and it’s his students’ fault they can’t learn. They are, with the exception of one of them, too distracted looking at cards of Lola Lola, a singer at the Blue Angel, a club in a very seedy part of town. One of the cards shows Lola dancing. On the card is glued a mini-hula skirt, and if one blows it, the skirts lifts up to reveal Lola’s legs and undergarment. Even the professor is fascinated by this, and in private, does his fair share of blowing at the card.

However, Immanuel is still a professor, and like all good movie professors will stop at nothing to help his students escape the evil influences of vice. Therefore, he goes to the Blue Angel to find his students. When he happens upon Lola herself, he tells her to leave his students alone. Lola senses an opportunity to have fun at a fragile man’s expense, and she lures him in with kindness and then punishes him with cruelty, at one point blowing facial powder into his face after telling him how sweet he is. On their second meeting, she begins to view him differently after he defends her honor when a customer tries to molest her. Immanuel even slaps her boss for allowing it to happen. Moments later, Lola is singing “Falling in Love Again” as Immanuel watches with a love-struck gaze in his eyes.

The Blue Angel is the kind of film in which the audience can see the train wreck well before the characters can. The film’s central theme seems to be emasculation. First, Immanuel is robbed of his dignity as a teacher by his students and what’s left of him is slowly sucked away by Lola, whom he is forced to live off of for five years. By the end of the film, Immanuel has gone from teaching Hamlet to warming up Lola’s hair curler and selling her photos to playing the assistant to a magician and getting eggs cracked on his head in front of his former coworkers and students. He is a broken man, and his last act is one of sheer rage. It is well worth watching.

The Blue Angel stars Emil Jannings and Marlene Dietrich. It is in German and has white boxed English subtitles.

There are two versions of The Blue Angel, one in German and the other in English. They were filmed simultaneously using the same cast and are essentially the same film with only minor changes in the English version, perhaps to reduce the amount of English dialogue spoken by actors with thick German accents. It doesn’t help. One would be wise to watch the German version.
Posted by Azrael Bigler at 5:30 PM