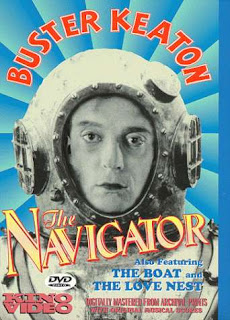 It may be hard for newer generations to discover and appreciate Buster Keaton, for some of the jokes and characters in his films do not stand up to today’s hypersensitive views regarding race and ethnicity. Buster Keaton was no stranger to blackface, and some of his films do include characters that, if created today, would be very difficult to find humor in. One aspect of Keaton’s classic film The Navigator would certainly be difficult to explain by today’s standards. However, Keaton’s films were made in a different time, and perhaps it is best to watch them with that in mind. The important thing is for people to keep watching them, for they do indeed showcase a master at work.

As The Navigator opens, foreign agents are hatching a plot to destroy the Navigator, a ship that has recently been sold to their enemies and which they fear will be used against their home country. They decide to release the ship into the sea, where, they reason, it will meet its deserved fate. Some distance from them, Rollo Treadway, a not-so bright rich young man, stars longingly out his window. There, he sees a couple driving off on their honeymoon. They stare into each others eye, smiling as if no one could be giddier. It is a joy that Treadway wants for himself, so he decides – and announces to his butler – that he is going to get married. “When?” the butler asks. Treadway replies, “Today,” and he is off to make the necessary arrangements for his wedding.

If only he had asked his girlfriend first.

Later, rejected and dejected, he decides to go on the cruise he had intended to be his honeymoon alone. Not wanting to oversleep, he boards the ship the night before. The next day, he will awaken to discover that he is the only person on the ship. Well, not the only one. There is one other passenger - the woman who turned down his proposal of marriage.

Much of the humor in The Navigator comes from placing two characters in extremely unenviable positions; for example, they are stuck on a crewless ship, forced to cook and clean for themselves, and compelled to aid someone that they would rather be continents away from. Through all of it, Keaton is priceless, from using salt water to make coffee to washing his hands underwater (It has to be seen to be believed.). In one scene, Keaton’s look deadpan at the camera and claps for a waiter to serve him. When one doesn’t appear, he claps again, oblivious to the situation he is in. In the meantime, the Navigator continues its journey into the unknown.

As the film progresses, it should be remembered that moviegoers’ sensibilities were not as they are today, even though we may wish they had been. What audiences in the 1920s accepted as humorous was sometimes stereotypical, yet it is hard to see the stereotypes in The Navigator as intending to insult or demean. The Navigator is a product of its time, much like The Birth of a Nation, Gone with the Wind, and Song of the South are products of theirs. Hopefully, The Navigator will continue to be discovered by new generations of film fans, as it, and more importantly Buster Keaton, deserves to be. (on DVD)

*Included on the DVD on The Navigator are two short films, The Boat and The Love Nest.

The Boat appears to be about a family that moves onto a boat that the father (Keaton) has built. They set sail and do not appear to be going home. It is part Swiss Family Robinson at Sea, part How to be a Sailor starring Goofy.

The Love Nest is about a man who loses at love and decides to sail around the world to be rid of the pain. Before he casts off, he writes his ex a letter. In it, he writes, “Since you have cancelled our engagement, I have decided not to marry you.” He adds, “If you don’t receive this letter, contact me.” Later he finds himself on a ship called the Love Nest, run by a captain who throws people overboard for something as trivial as accidentally spilling his coffee. To his credit, the captain immediately throws a reef into the ocean.

Both shorts are worth watching.
Posted by Azrael Bigler at 12:02 AM

Labels: 3 and a half stars, Buster Keaton, reviews, Silent Films

Great job on the site, it looks wonderful. I am going to bookmark it and will make sure to check often