Review – The Discreet Charm of the Bourgeoisie 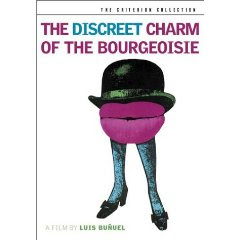 The Discreet Charm of the Bourgeoisie – 1972, France

There seem to be two kinds of films that end up hailed as masterpieces. The first kind resolves around a well-told, well-written story. It’s hard to exactly characterize the second kind because some films are called masterpieces even if few can exactly pinpoint what they are about or if they even have a complete story. I remember reading that David Lynch’s Inland Empire was a masterpiece. After I saw it, I wasn’t 100% sure what I had seen, and to be honest, I had no desire to watch it again to see if it made sense the second time. And yet there it was being given four stars and called a masterpiece by many critics.

Trying to explain the plot of The Discreet Charm of the Bourgeoisie is both simple and a fool’s errand. At its simplest, the film is a look at seven well-off members of the upper class who run around trying to eat together – without much success. Their attempts are impeded by misunderstandings, death, sex, company, and ultimately fear. In fact, much of the film details their failed attempts to simply be able sit down together and have dinner. In one scene, as the seven of them wait for their food to be served, they engage in a long, seemingly pointless - but oddly interesting - discussion of the virtues of a dry martini. At one point, they even invite their chauffeur inside to partake in the festivities in order to illustrate that those of the working class have no appreciation for fine wine. Their action shows neither discretion nor charm, yet they are quite pleased with it.

Fernando Rey plays Don Rafael Acosta, the ambassador of Miranda and a man who despite the class he exudes in public leads a rather immoral life. Between smuggling drugs into France, carrying on an affair with his friend’s wife, and escaping assassination attempts, one can understand his need for a simple meal with friends. In one humorous scene, after his romantic rendezvous with Simone is interrupted by her husband, Don Rafael attempts to seduce the young woman sent to assassinate him. Like his attempts at food, this also fails. Also of interest is Monsignor Dufour, a bishop who arrives looking for work as a gardener. He displays an honor and decency lacking in the film’s other characters, so much so in fact as to make his later acts quite surprising.

Halfway through The Discreet Charm of the Bourgeoisie, the film changes, moving away from its somewhat coherent plot and evolves into a series of dream sequences. One character has a nightmare about going to dinner at the home of a French colonel, only to find him and his friends on stage in front of an audience and him having forgotten his lines. He awakens only to find himself in another dream, one that depicts a more serious situation that could lead to hurt pride and violence. That these characters, so jovial and carefree in the presence of their companions, dream of such things suggests that little pleasures may do more for them than simply provide them with nourishment and alcohol. It may be a defense mechanism, allowing them to forget the daily peril that the choices they’ve made have put them in. Perhaps nothing makes one forget the fear brought on by a nightmare like a late-night sandwich.

I will confess that I’m not sure what to make of Bunuel’s film. I liked it, but I will admit that when it was over, I wasn’t sure what it had all added up to. However, watching the film’s final scene gave me a peculiar sense of calm, as if justice had finally come to Don Rafael. Perhaps I owe the film a second viewing. However, should that be required to fully recognize a "masterpiece"? (on DVD from the Criterion Collection)

*In French with English subtitles
Posted by Azrael Bigler at 11:04 PM