Review – Sally of the Sawdust 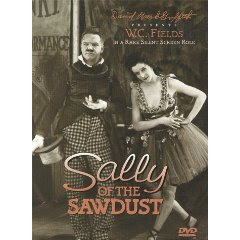 Sally of the Sawdust tells a simple, rather predictable story. There’s the fish-out-of-water, eccentric, young woman, the over-the-top man she calls “Pop,” an example of love at first sight, and a man full of spite and rigidity who just might bring misery to everyone involved. Despite this, it remains a film that is extremely fun to behold. Sally of the Sawdust tells the story of a young girl named Sally (an energetic and bubbly Carol Dempster) who, after her parents’ untimely deaths, becomes the responsibility of one Professor Eustance McGargle (the great W.C. Fields), a magician, entertainer, con man, and illegal alcohol distributer among other things. For reasons that are left unexplained, the Professor decides against informing Sally’s grandparents of the existence of their granddaughter. Perhaps he feels this is their punishment for disowning Sally’s mother Mary after she decided to marry a circus performer. Whatever the reason, he begins to raise Sally as if she were his own flesh and blood.

Sally of the Sawdust tries its best to avoid the predictable pattern that other movies like it have fallen into, but it only succeeds partly. McGargle does not suddenly recognize the responsibility he now has and resolve to do his best to raise Sally correctly and in a stable environment. Quite the opposite actually. Years later, Sally is a little odd. Part tomboy, part child, she can be filled with childlike naivety one moment and boxing someone’s ear off the next. In addition to these quirks, she also has an artistic side. As part of McGargle’s act, she juggles, performs stand-up comedy, and dances in a way that resembles Isadora Duncan but leaves viewers with the impression that her routines are being performed without even the slightest bit of practice or choreography. As Sally performs, she is eyed by a male circus performer, one who apparently likes what he sees enough to follow Sally back to her dressing room and try to peak at her getting out of costume. Soon the leach is trying to force himself on Sally, and it is up to McGargle to save her. However, seeing how well she holds her own in an all-out brawl a little later makes me wonder if she really needed his help at all. No matter, though. The experience wakes McGargle up to the fact that Sally has grown into a woman and perhaps needs the kind of care and education that he and the circus cannot give her. He decides to investigate Sally’s grandparents to determine whether they are the kind of people who will give Sally the life she deserves. What comes next is not entirelty unpredicatable.

In spite of its main plot, Sally of the Sawdust is more of a comedy than a drama. Director D.W. Griffith takes full advantage of W.C. Fields’ comic and physical talents. For example, McGargle’s performances are a showcase for Fields’ extraordinary abilities, be they simply shuffling cards in abnormal positions, juggling, or involving audience members in gags and embarrassing them. Fields also takes advantage of other moments to show his genius. Witness the way he calmly rinses out his cigar after being drenched by water or the way he drives a Ford over a field as if it were a horse, even brandishing a jockey’s whip to encourage it to go faster. Later, when he apologizes for being late, he explains that he was “thrown by a Ford.” Perhaps one of the films most audacious moments comes when Sally stuffs two muffins into her bra so that she and her Pop can eat later. McGargle turns around, sees her, and says, “Sally, you are growing up!” It’s a line that would probably have been censored just ten years later due to the Hayes Code.

Through much of Sally of the Sawdust, there is an underlying sense of classism. Mary’s father, Judge Henry Foster, doesn’t accept the man she loves because of his profession, and later, he has the same objection to McGargle and Sally after his business associate’s son falls for her. In addition, there is the sense that the law does not work for those whom the powerful deem as being a class beneath them, as even those entrusted with justice and honesty stack the deck against them. Add to that the sorrow of Mrs. Foster, still grieving for her deceased daughter after all these years, and the attachment she feels to Sally, and you have all the makings of a courtroom-family melodrama.

In the end, in spite of the vitality and innocence that Dempster brings to the character of Sally, the film belongs to W.C. Fields, and he makes the most of it. While some of his jokes may not seem completely appropriate today – in particular his wearing of Native American clothing to escape arrest – he is a perpetual joy to watch at work. It may be that watching a two-hour W.C. Fields film is the equivalent of taking a master’s class in comedy. He makes everything he does look effortless, a skill that many comedians would dearly love to have. Sally of the Sawdust may not be a masterpiece like some of Griffith’s other films, but it is certainly one worth seeing. (on DVD)